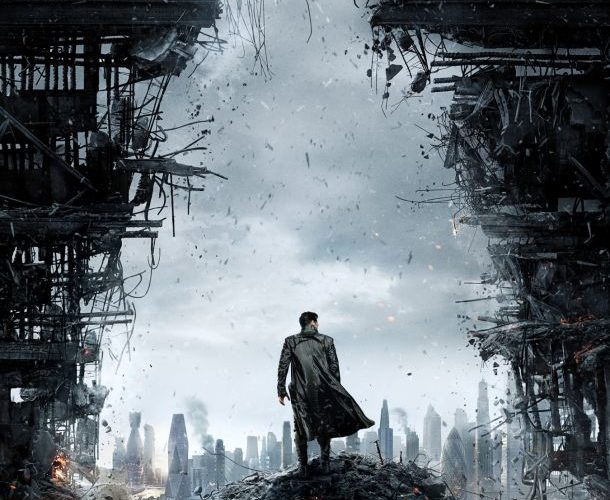 There’s a moment early in J.J. Abrams’ Star Trek Into Darkness that irrevocably moves this series away from the gentler humanist roots of its creator Gene Roddenberry and towards the temptress gleam of big-budget spectacle. New villain John Harrsion, played with stentorian authority and sinister intelligence by Benedict Cumberbatch, launches a devastating assault on the Federation and the response is one of weaponizing Starfleet and militarizing an institution dedicated to exploration and understanding.

Trek nerds who paid close, heartbroken attention to the last film will know the day they dreaded is here, one made inevitable the moment that Abrams blew up their beloved Vulcan in 2009 and thus created a world full of real threat and less logic to deal with it. If you are one of the faithful, Into Darkness might be a bitter pill to swallow, but for all others Abram’s latest is a slam-bang space opera that delivers the thrilling goods with enough character development and thoughtful humanity to justify its place as part of this enduring franchise.

Darkness wastes no time at all picking up where the reboot left off, choosing of course to focus specifically on the couple at the heart of it all; not Spock and Uhura or Kirk and any female life-form in immediate vicinity, but the impetuous, reckless star captain and his logically-inclined Vulcan bromance. Spock and Kirk, all the way back to the days of Nimoy’s hilariously accusing arched eyebrow and Shatner’s exasperated sneer, have long personified and expanded the themes and values of Roddenberry’s staggering work. That Abrams is still mostly interested in rooting out what makes these two guys tick, even in an off-kilter alternate universe where their best adventures are still ahead of them, helps his film retain the overall spirit and good-humor of its inspiration. That humor, especially, is required when the movie starts boldly (and loudly) going where so many blockbusters have gone before, into the molten heart of special effects oblivion. Before we arrive at all the really dire direness that Abrams has concocted with scriptwriters Roberto Orci, Alex Kurtzman and Damon Lindelof, we are treated to a colorful and imaginatively conceived prologue that briefly teases the idea of what this Trek cast would look like on their five-year mission. In a matter of moments one of the crew is lowered into an active volcano, the Prime Directive is straight-up violated, and a real moment of sci-fi wonder is delivered courtesy of some alien tribesmen. It’s a fun, tongue-in-cheek escapade that channels Indiana Jones as much as it does anything from the Original Series and it’s a clever way for Abrams to remind us who’s really piloting this particular wessel, er, vessel.

The fallout of that stunt sees Pine’s Kirk reprimanded by a disappointed Pike (underutilized Bruce Greenwood, as if there’s any other kind) and the Enterprise’s bright future briefly sidelined while Spock is sent off to do other things like bicker with Uhura and puzzle through the finer points of human behavior. Of course, that’s when Harrison shows up, a terrorist hiding within the ranks of Starfleets own and whose chaos comes at a great personal price to Kirk, who abandons all that ‘seek out new civilizations’ bunk in favor of good ol’ fashioned revenge. When Peter Weller’s Admiral Marcus commissions the Enterprise to stock special missiles and chase Harrsion to his hiding place on the Klingon home-world of Qo’noS, it looks like a legitimate war might finally break out in the great Enlightened Age. There are twists and turns, some of them prompted by familiar faces like Carol Marcus (now Alice Eve), and a bevy of beautifully enacted set pieces that are masterful and exciting unto themselves but finally develop a kind of churning redundancy by the time the last one rolls.

Let’s not beat around the bush on this one, although I’ll say no more about the plot. It’s not the carefully calibrated story that elevates Into the Darkness; the script is a rather inelegant slab of deus-ex machinas mated with macguffins and married to cliches and grand axioms, with pop-culture quipping and callbacks band-aided over wormhole-size plot-holes. Truthfully, it’s not the production design or the special effects, although they are deeply impressive and more textured and believable than they have ever been in this series. No, it’s not even Abrams, who directs the Force out of this thing, hoping to put to rest any remaining suspicions that he won’t be able to wrestle Star Wars into submission. Plain and simple, it’s the cast of this new Trek, not unlike their fore-bearers, that makes this new voyage, warts and all, such a pleasure to embark upon. Pine may not seem much like Shatner’s Kirk, but the beauty is that he never need be that man thanks to the diverging path set by Bana’s Nero. Although this installment jerks Kirk through so many hoops he might as well be a Russian circus bear, the young actor exudes a cofidence and bruised human vulnerability, masked by calculated bluster, that grounds the character in a way we haven’t seen since Wrath of Khan. The masterful part of Darkness, and there aren’t many elements I’d describe that way, is Pine’s platonic chemistry with Quinto’s Spock, who gives what might be the most layered and insightful spin we have ever seen on the Vulcan, no offense to the majestic Nimoy who also returns. This Spock doesn’t just confront his humanity, but inquisitively explores it and challenges it, much like Spock Prime did regularly on television when faced with true alien otherness (The Devil in the Dark comes to mind). When some late developments require Quinto to carry the movie and reconcile the warring facets of Spock’s inner being, he rises to the occasion.

Karl Urban, Zoe Saldana, and Anton Yelchin get downsized a little here, and in Urban’s case it’s a real shame since his rendition of Bones was the finest element of the last Trek. Simon Pegg is still on-point as Scotty, and he must make us believe he has the same kind of kinship with a transporter room that James Doohan did while using his sense of comic timing to navigate the film through the rough shoals of melodrama. Jon Cho’s Sulu is also given limited screen time, but what he gets he instinctively nails and Takei should be pleased with the respect and invention the young actor builds onto the role. Amidst solid work by Greenwood, Eve and Weller (Buckaroo Banzai in the house!) there’s Cumberbatch, who is just as good and ultimately surprising as all his Sherlock fans hoped he would be. It’s folly to try and suggest how far the actor goes here to create a plausible threat and a multi-faceted being because to do so would court heavy spoiler territory. Let me just say that even though one can easily guess Harrison’s surface-level secret, the actor skillfully hordes his character’s soul unto just the right, disarming moment.

There’s such a relentless and unflagging sense of showmanship to Star Trek Into Darkness that it’s hard not to be won over by even its most repetitive and bombastic moments. So much has been said about how it violates and disrespects the intellectual spirit of the previous series, but what’s been missed is that Trek, while a dreamer in its heart, also yearned for comic-book pulp in all its iterations, hampered by budget, structure or the fact that once the old cast made it to the big screen, most of them couldn’t buckle their pants, let alone swashes. Abrams has jogged past that quiet, conversation-driven reverie of all peoples united in the stars but he’s not completely forgotten it. In the restless, young heart of everyone who ever looked at the Enterprise with legitimate anticipation and wonder, there lurked a semblance of what shows up onscreen here. This isn’t the Star Trek we always yearned for, but given the remarkable technological leaps that occur at the closing of Darkness, I suspect that the third installment may bring that dream to fruition.

Star Trek Into Darkness is now in wide release.