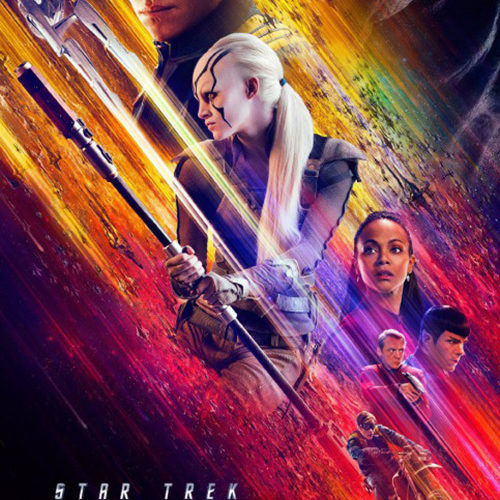 After the pleasant fluff of its kick-off installment and the frog march of unpleasantness that was Into Darkness, the rebooted Star Trek film series finally hits a fun median between big-budget bombast and classic Trek bigheartedness with Star Trek Beyond. Does the franchise’s full descent into action, with only the barest lip service paid to big ideas, cause Gene Roddenberry’s ashes to spin in their space capsule? Probably, but in the barren desert of summer 2016 blockbusters, this is a lovely oasis.

Wisely ignoring that superhuman blood cured death and personal teleporters made spaceships obsolete in Into Darkness, Beyond starts with the USS Enterprise three years into its mission to explore new worlds and boldly go where no one has etc. etc. Bored with routine and concerned with their legacy, respectively, Kirk (Chris Pine) and Spock (Zachary Quinto) are both mulling over leaving the ship for new pursuits. But upon taking a rescue mission in an uncharted nebula, the Enterprise is ambushed by a huge swarm of vicious attackers led by the enigmatic Krall (Idris Elba). The crew is forced to evacuate to a nearby unknown planet, where most of them are taken captive by Krall’s army. Kirk, Spock, Bones (Karl Urban), Scotty (co-writer Simon Pegg), and Chekov (Anton Yelchin) are left to rescue them, with the help of local scavenger Jaylah (Sofia Boutella).

After the first film’s origin story and the shoddy Wrath of Khan remake that was the second, Beyond decides to carry the series forward more in the spirit of the movies that followed from the first Trek show, which were mostly lightly serialized, super-sized episodes. The story doesn’t attempt to shake up the universe in a big way or “change things forever” — it simply throws its characters into a new situation to spur on some action and character beats, and hopefully say something about these people and this world in the process.

On the second note, Pegg and Doug Jung’s script is sort of successful, although only because it sets up the very barest of themes that “people are stronger together” — a Saturday-morning-cartoon-level lesson that hardly requires complex exploration. Even then, it’s somewhat undermined by the fact that, as usual, the focus is wholly on the seven major leaders of the Enterprise’s crew while the rest are firmly backgrounded, even though the main thrust of the plot is Kirk’s undying loyalty and devotion to them. But only one of these crew members even gets a name. It is a long-running Trek joke that everyone not in the main cast is a “redshirt” who exists only to die, and Beyond whiffs the admirable aim of trying to get the audience to care about the redshirts by, well, not giving us any reason to care about the redshirts.

Beyond treats the main cast much better. With the narrative separating them into disparate groups, it gets to have fun pitting them against various scenarios and giving each a moment in the spotlight. Beyond far exceeds its predecessors in never making any of the main characters feel as if they’re just filling space, as well as giving them some vital role to play in the plot. (Although Uhura [Zoe Saldana] yet again gets the shortest of all shrifts in that department. Sad.) The most helpful thing J.J. Abrams (credited here as executive producer) ever did for this series was oversee this cast’s assembling, and newcomer director Justin Lin, who has ample experience managing ensembles, truly brings the best out of them. Spock and Bones become bickering road trip buddies. Sulu (John Cho) and Uhura briefly get to act out a prison camp movie. Scotty gets up to engineering antics with Jaylah. It’s all very agreeable and everyone’s having a good time.

Lin also directs action better than Abrams, for the most part. Though hand-to-hand combat is primarily a shaky-cam mess, four movies’ worth of vehicular Fast & Furious mayhem has given him a nimble eye for zipping between people in motion and grand money shots. (After eye-fucking so many real cars, CGI spaceships are a breeze.) Plus, the climactic fight makes delightful use of Super Mario Galaxy-style gravity shenanigans. Unfortunately, the one negative Abrams trait that this film has not jettisoned is his damnable love of the mystery box, which is kept shut here even longer than it was in Into Darkness by concealing the main villain’s backstory and motivation until literally the last 20 minutes. It’s absolute madness, doing nothing to build intrigue and everything to prevent the audience from getting fully invested in a movie’s stakes. And it means that Elba, already hampered by a prohibitive amount of make-up, gets little chance to make an impression as a villain.

That character is nevertheless beside the point here, as Krall exists only to threaten the good guys and occasionally deliver some silly speechifying on how friendship is for losers. This is fine, because the Enterprise crew fights him with the power of mid-‘90s rap-rock (yes, really), which I sincerely believe to be the height of the possibilities science fiction can bring us. Hence, for the first time, I’m interested to see what the next film in this series might deliver.