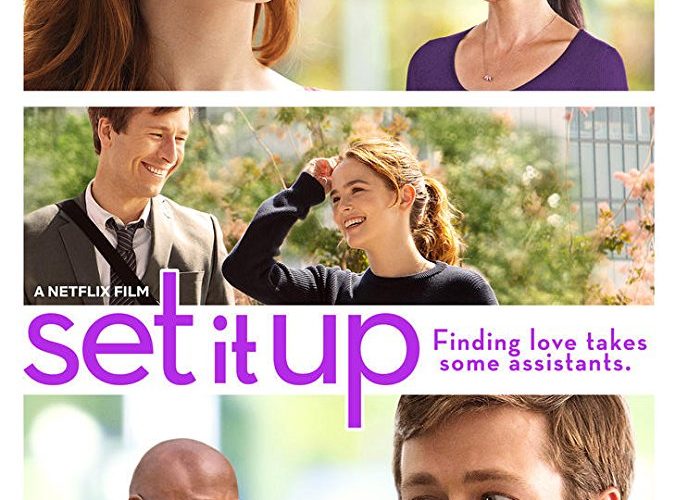 Review: ‘Set It Up’ Revives the Rom-Com, Thanks to the Chemistry of its Stars

The romantic comedy is dead. Long live the romantic comedy. There is a speed to the dialogue and action in Set It Up, directed by Claire Scanlon, that speaks to its overall success. From minute one this thing moves, establishing what it needs to quickly and moving right along to the cute stuff. Harper (Zoey Deutch) is an assistant for Kirsten Stevens (Lucy Liu), a cutthroat sportswriter now running a high-profile website, in the same building that Charlie (Glen Powell) works for Rick Otis (Taye Diggs), a financial whiz with a pronounced temper and impending divorce.

Once the two underlings meet, they devise a plan to get their two workaholic bosses together so they will regain some freedom in their lives. This is the kind of high-concept concept that fueled most of the studio rom-coms in the 90s, igniting the careers of people named Julia, Sandra and, yes, Taye! Smartly, writer Katie Silberman doesn’t linger on the minutiae of the plan/s, instead honing in on the in-between moments between its leads. Deutch and Powell pop with a charming cinematic symmetry, while Diggs and Liu make the very most of their (not-so) over-the-top characters. Watching these two vets chew up the screen makes one long for the movie star careers they should’ve had.

Deutch has been flirting with A-list status ever since she stole a couple of scenes in Richard Linklater’s Everybody Wants Some!! (which also starred Powell). Since then, she’s lead an underrated YA picture (Before I Fall) and played expertly against Bryan Cranston and James Franco in Why Him?. This is her romantic comedy and she knows it. Powell, thankfully, concedes and reacts off of Deutch nicely. What’s achieved in their on-screen relationship is easier said than done: we want these two people to fall in love. We want it badly.

Titus Burgess, Pete Davidson, and Jon Rudnitsky all show up in support, grabbing a laugh or two a piece. And while New York City serves as the setting here, Scanlon does well in keeping the action primarily in offices and apartments. The economy of each scene maintains focus on our four MVPs and their making the very the most of a very good script. Set It Up, from its title on down, is a fresh mixture of a reliable formula.

Set It Up is now on Netflix.