Scenes from an Empty Church Review: Onur Tukel Takes an Authentically Cynical Look at Faith During a Crisis 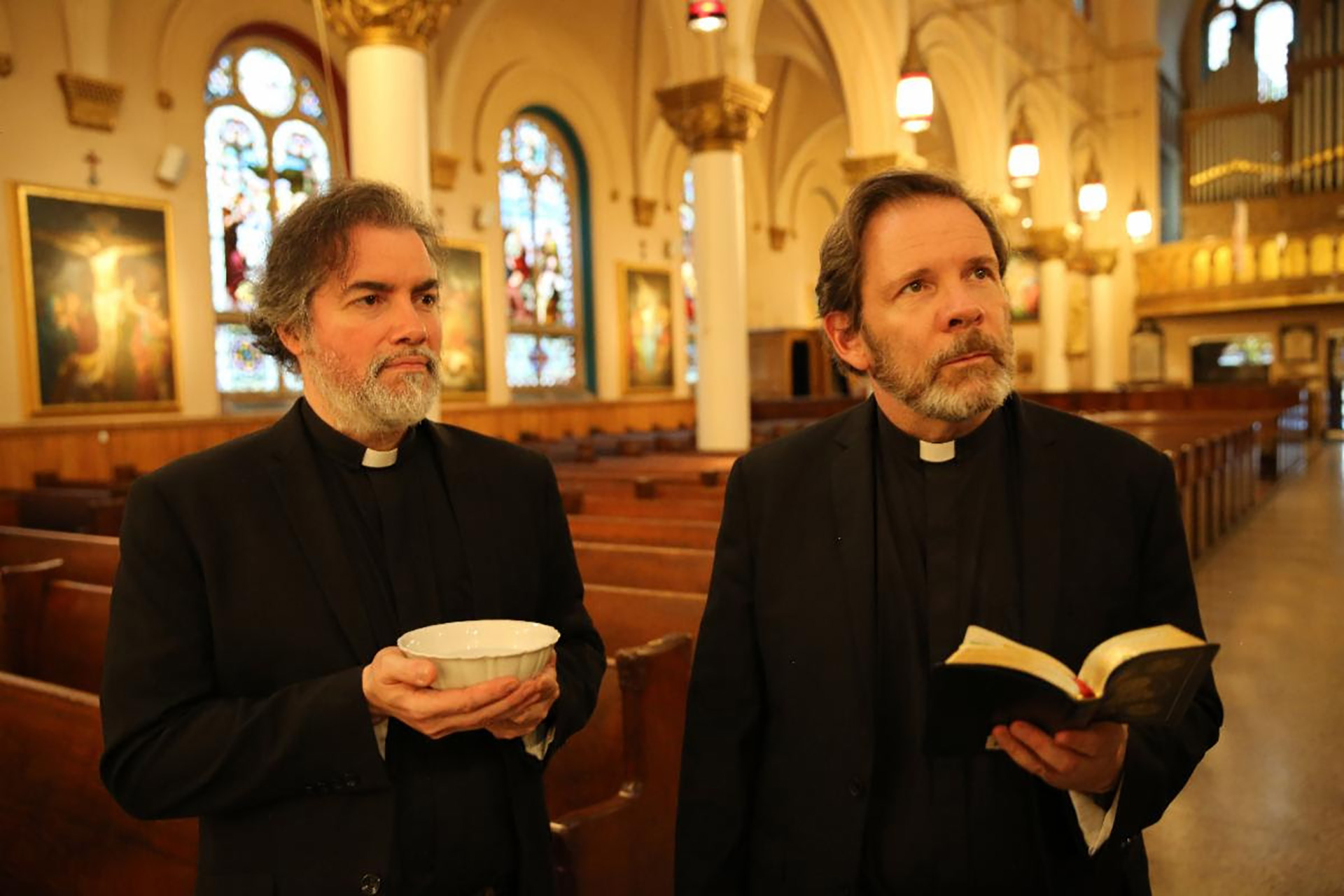 We all look for signs and interpret them how we see fit, whether doing so is correct or not—and despite those so-called “signs” proving nothing but coincidences to which we’ve ascribed unearned meaning. It’s how we find comfort. It’s how we wake up in the morning. And it’s the point where spirituality and religion intersect before ultimately diverging, since the former deals in faith’s freedom and the latter in faith’s commoditization. One allows us to believe what we believe without putting a name to it. The other sells us an unconditional clean slate by request no matter what heinous crimes we’ve committed yesterday. When opportunism becomes a better road towards salvation than compassionate morality, something has gone horribly wrong. It’s “money talks” and “piousness walks.”

Leave it to a filmmaker like Onur Tukel to take such a cynical (albeit true) interpretation of organized religion, wrap it around a moment in history mired in a crisis of faith—like the COVID-19 pandemic—and somehow find a way to embrace the humor and hope borne from that marriage. He surely saw the underlying fear of 2020’s shutdowns and quarantines alongside the divisiveness born from its impact, knowing he could deliver one of his trademarked darkly nihilistic comedies. Scenes from an Empty Church could have therefore easily devolved into a series of petty grievances and sanctimonious bile—while reveling in exposing the Church’s hypocrisy via pitting the faithful against the faithless—but Tukel relents to highlight rebirth in the face of destruction instead.

And he does so through a Jewish-born Catholic priest who’s found himself at a crossroads like so many others. Father Andrew (Kevin Corrigan) narrates as though the scenes presented are being contextualized with hindsight—the assumption being that he was told about those moments where he wasn’t present. His and Father James’ (Thomas Jay Ryan) New York City church has been closed to the public ever since the outbreak crippled the country in March and, to make matters worse, their elder statesman (Father Brooks) has recently passed on because of the virus. James has fallen into a depressive stupor wherein television fills the void opened by an absence of lively conversations; Andrew starts smoking again as he watches the quiet streets from his window.

There’s nothing like the earmarks of a potential “end of days” scenario to get people thinking about their mortality, faith, desires, and regret. Andrew hasn’t spoken to his father (Paul Reiser) in years and wonders if the reason is more about guilt than anything else. James has walled himself away from the world with disinfectant and a stringent enforcement of CDC rules despite the two of them being the only people to ever set foot inside since quarantine—and who could blame him with what happened to Brooks? They’d probably go crazy while languishing in isolation as despair and debt set in, if not for a surprise phone call from an old friend of Andrew’s (Max Casella’s Paul) with the chaotic energy to shake things up.

Be warned: the ways in which Tukel treats the virus can be triggering insofar as it seems to misunderstand the facts of its transmission and our safety. Not knowing when he wrote the film means some of this truth might be a product of unawareness, but that’s hardly an excuse—they would have needed daily testing and a baseline, working knowledge of risks to even begin production. Andrew and James seem to believe strangers don’t need to wear masks indoors. They are easily strong-armed into letting their guard down when it comes to vigilant measures despite James being so vehement at the start. And neither ever mentions the real threat (asymptomatic shedders) when told by a guest that he / she “feels healthy.”

If these aspects may seem inconsequential, they’re hard to ignore when we’re also being asked to believe we’re watching events that occurred just a few months ago. Because Tukel’s script (from a story by him and Andrew Shemin) is verbose in a way that makes it feel like a heightened state of theatrical reality rather than fly-on-the-wall authenticity (all his scripts are), we aren’t necessarily taken out of the story by these incongruities. That Andrew and James can be afraid of death and not let that fear educate them about important details is kind of the point where it concerns mankind’s fallibility and hypocrisy anyway. Them letting Paul inside to reclaim human connection in Brooks’ absence above keeping him out for safety is a legitimate choice.

That reclamation also opens the possibility of letting parishioners in again on an appointment basis. We’re watching tiny vignettes sparked by the conversations had with worshippers who have been in desperate need to speak with God. How do Andrew and James react to their presence? (I love a moment where the former is awkwardly watching a man pray, realizing he’s never done so before since he’s usually running a sermon or giving confession.) How do these members of the church provoke them into rethinking their stances on what’s happening and acknowledging the secrets that the sudden fragility of life can no longer keep at bay? Does Paul stay sober to live and experience the now or fall off the wagon to hedonistically enjoy his final days?

We hear commentary on frontline medical workers and the impromptu applause New Yorkers gave them at seven o’clock each night. We witness a philosophical lovers’ quarrel about how the pandemic can be thought as both an opportunity to embrace the future and evidence to reject that one exists. Craig Bierko enters the frame as the epitome of a fair-weather believer looking for a loophole (the scene’s creepiness makes it the most Tukel-esque of them all) and Eva Dorrepaal arrives to drive home the idea that actual miracles—the things the Bible tells us are real—can never be thought of as anything but illusions. We’re told to believe in God, yet anyone who “sees” Him is committed as insane. A resurrected Jesus would be declared a fraud.

And it’s those conundrums that make Scenes from an Empty Church vital and entertaining at a time where partisan politics and pessimism have exploded. They mock to make light of certain aspects of religion that “demand” reverence and give a voice to the complexities behind faith that are expanding our ability to break from man-made rules and regulations that only divide. Some moments work better than others, but the main trio of Corrigan, Casella, and Ryan do their best to ensure we give each a fair shake because the ones that succeed do so with poignancy and grace. Case in point: Paul telling James he doesn’t want to be saved. It’s an obvious, in-character response and yet profoundly drawn by the eclectic journey necessary to pose the question.

Scenes from an Empty Church opens in limited release and VOD on July 2.