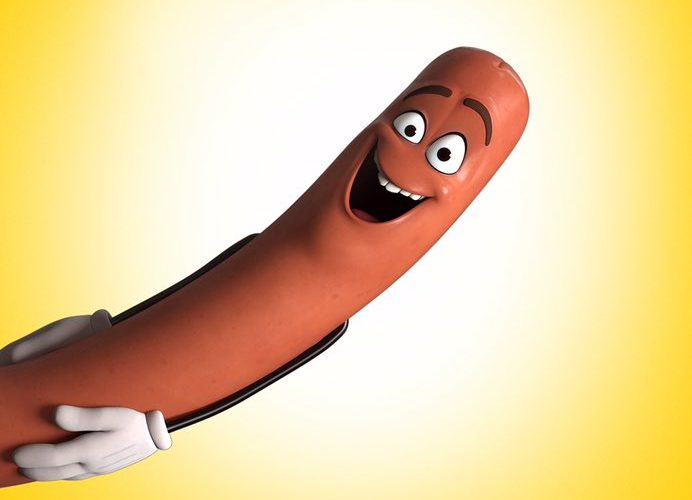 Within the first few minutes of Sausage Party, a package of horny “virgin” hot dogs boast to a group of neighboring buns how they’ll fulfill their wildest desires when they are finally able to fornicate by sticking themselves inside the flaps of the respective rolls. This opening — after a lavish musical number — serves as a useful litmus test for Seth Rogen’s brainchild: an R-rated animation that isn’t as interested in re-inventing the wheel as it is taking that wheel, lathering it with vulgarity, and spinning it again, and again, and again. While this sounds like a slight, as Sausage Party breaks out of its Pixar-inspired packaging, so to speak, its repetitiveness evolves into a delirious cacophony of obscenities that will terrify the children of unaware parents for decades to come.

The food is alive at the massive supermarket Shopwell’s, but, unlike Toy Story, a human in their standard state can’t pick up on their anthropomorphic qualities. Rather, the cuisine can do any number of vulgar things right under the eyes of the “Gods” (aka people) as their actions exist in the “fourth dimension.” All the commodities — most notably Rogen’s Frank and his sausage crew, voiced by Jonah Hill and Michael Cera — crave “The Great Beyond,” located outside the sliding doors, and the only way to have that sweet release of expected heavenly bliss is to be chosen by one of the “Gods.” All but a few enlightened goods at the store are aware of the horrific truths that await them, primarily Danny McBride as a Honey Mustard, hell-bent on committing suicide after he’s returned from torture of the outside world — an amusing antithetical point-of-view to Heaven is For Real.

These religious undertones, which won’t be strange to anyone who’s seen This is the End, are layered throughout the gleefully offensive humor, extended to Nazi jokes and a microcosm of the Israeli-Palestinian conflict, courtesy of some brilliant voice acting by Edward Norton as Sammy the bagel and David Krumholtz as a lavash. Eventually, Rogen’s main character attempts to spread his atheistic truth to the those at the store: will they buy into what’s clearly in front of them or fall back on the comforting belief that a utopia awaits them outside? These boundless questions of spirituality aren’t handled with complexity, but they are concluded in a more sympathetic way than one might expect.

While these more cunning riffs delight in spurts, the rest of the jokes are best exemplified by the main visual easter egg: a license plate reading “Dixar.” At its most unimaginative, we find Nick Kroll playing Douche, a villain hell-bent on going after our main group with motivations that seems less than coherent and food puns that overstay their welcome almost immediately. Whether or not it’s due to the script having to be locked in years prior, due to the painstaking animation process, Sausage Party lacks the insightful, clever exuberance of Rogen and Evan Goldberg’s other collaboration this year.

When it comes to the animation, as directed by Conrad Vernon (Madagascar 3, Shrek 2) and Greg Tiernan (Thomas & Friends), the duo are clearly reveling most when directly at odds with their family-friendly past work. While the visuals lack some detail in their CGI sheen, a Saving Private Ryan-esque hellscape, involving the closest thing to warfare in the realm of food, delights in its maniacal chaos. Then there’s the seared-into-your-brain-forever finale sequence, but that’s better left unexplained; we’ll only say you’ll never consume food the same way again. The film also boasts the finest Terminator 2-inspired visual gag featuring a Stephen Hawking-esque, wheelchair-bound piece of gum that you’re likely to see all year.

These few ingenious sequences, otherwise absent in Hollywood’s sterilized realm of studio animation, do make it a perversely delicious meal, despite those inconsistencies in humor — or, rather, the single note played over and over again. Following the mold of Pixar’s debut feature, Sausage Party is a mixed bag of comedy, but when it finally has the gusto to ratchet things up on a visual level, the surrealistic vulgarity is something to be appreciated, even if you may feel assaulted once the lights come up. Then again, the tables are turned when you glance down at your half-eaten bucket of popcorn.