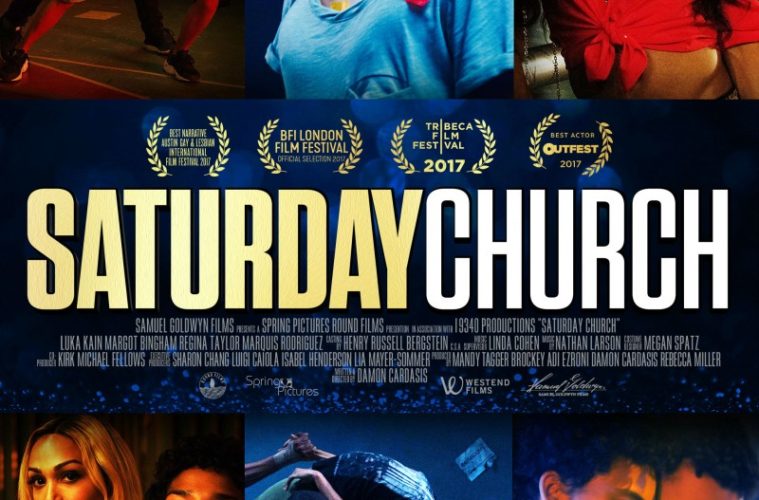 Saturday Church is the sort of debut indie feature that would be best played with the sound off. In some ways, this is more of a compliment to the film’s virtues than a criticism. In today’s supersaturated, content-driven, post-Sundance indie feature market, it’s often the case that the writing is the most obviously lacking, followed closely by poorly conceived performances, which are often the natural extension of a lazily constructed script. Turn the sound off and a large swath of those common first-effort pitfalls recede into the background, allowing for the strengths (or weaknesses) of the direction to take center stage. In the case of Saturday Church, there is some fairly sturdy direction at work to admire, but, weighed down by some painfully clunky writing; the film has a hard time identifying what it’s good at and sticking to it. Where the trouble lies in such a roundabout compliment is when it must be acknowledged that Saturday Church is a debut feature that aims to deliver a strong social message, and, most troubling of all, it’s also a musical.

Written and directed by Damon Cardasis (a producer on the Rebecca Miller films Maggie’s Plan and Arthur Miller: Writer), Saturday Church tells the story of Ulysses (Luka Kain), a young African American boy who is beginning to realize that his interest in wearing his mother’s clothes is more than just a playtime curiosity. The film opens on his father’s military funeral, and quickly establishes the sense of a structured family life that is forced to rebuild in the sudden death of the father. His mom (Margot Bingham) works the night shift as a nurse at the local hospital, so she decides to call in her sister, Aunt Rose (Regina Taylor), to look after her two sons during the day. Aunt Rose is given cruel, Scrooge-like one dimensionality, minus any redemptive character arc. When she’s informed–courtesy of his younger brother, Abe (Jaylin Fletcher)–that Ulysses is still playing dress up with his mom’s high heels, she firmly lets him know that she’ll put him on the streets before she ever catches him in the act herself. Emboldened by a desire to escape his aunt’s suffocating presence, Ulysses decides to explore his burgeoning gender questions outside of his home, which leads him to befriend a group of young women, Ebony (MJ Rodriguez), Dijon (Indya Moore), and Heaven (Alexia Garcia), who bring him to Saturday Church, a home for the LGBTQ community.

The first musical number to come into play occurs when Ulysses goes back to school after his father’s death and is bullied by a group of boys in the locker room. Breaking from the film’s sombre tone for the first time, Ulysses launches into a musical number about one day being acknowledged and accepted for who he really is. For being a fairly dull song set to equally dull choreography, Cardasis does a serviceable job transitioning the scene from cliched high school locker room scene into a musical number. Leading into the musical sequence he places Ulysses on a dolly and glides him down a hallway with his bullies posed along the walls, transforming their menacing glares into possibly admiring ones, and tracks his movement with the camera directly behind his head. It’s nothing too flashy or inventive, but relative to the one-note key of his earlier scenes, it’s a welcome scene transition, even if the scene it transitions to is awkward and messy in-and-of-itself.

The story evolves generically from there: the kid meets and falls in love with another boy, Raymond (Marquis Rodriguez), and his new friends at Saturday Church imbue him with the courage to dress up as the person he feels himself to be on the inside, leading to the inevitable confrontational moment with his family that causes him to feel the full brunt of being a societal outcast, a role he ultimately embraces. With the final scene, featuring a title card that dedicates the film to the real life Saturday Church community center, the film takes on the unsubtle air of a PSA, and by coming out so bluntly with a social agenda it retroactively flattens the harried dramatic arc of the film even further.

Most admirable in Saturday Church is the palpable level of conviction that the cast and filmmakers give to this story of a queer, marginalized youth. Despite a script that seems to service didacticism over genuinely achieved dramatic moments, you can feel Cardasis’ compassion for his characters and the joy the actors bring to their roles. While the musical numbers are nothing to write home about, by providing an outlet away from the stilted plot and dialogue, they are responsible for the film’s best moments. Ulysses dancing by himself down the street after he kisses Raymond for the first time is a genuinely endearing moment that succeeds on nothing more than the effervescence exuded by Luka Kain’s performance. It’s a moment that suggests there just might be a future for Cardasis as as a director of films championing the LGBTQ experience, but whether or not that future is a bright one will likely depend on him honing his talents as a screenwriter first.