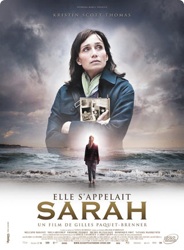 There’s a point in Sarah’s Key in which the story ends. We discover that which we have been waiting to discover. Then the film continues. For another hour. Our heroine Julia Jarmond (played in earnest by Kristin Scott Thomas) tells other characters in the film what we, the audience, already know. In fact, most of the characters she talks to already know the secret themselves. Over the course of two hours, this secret becomes anything but.

The problem, of course, is we know the whole story halfway through, after which point the inherent drama available in the film’s narrative disappears. Julia (Scott Thomas) is an American journalist working and living in Paris with her family, husband Bertrand Tezac (Frédéric Pierrot) and pre-teen daughter. The family is prepping to move into an old apartment the Tezacs have owned since around the time of WWII. Upon discovering that Bertrand’s family started living in the apartment only a month or so after the Vel’ d’Hiv Roundup, a Nazi-led mass arrest of Jews that took place in Paris in July 1942, Sarah begins to dig into the past.

While she digs, so does the film. Back in Paris 1942 in that same apartment, a smart, young Jewish girl named Sarah (played by Mélusine Mayance) tries to protect her younger brother Michel by hiding him in a closet when the Nazis come to take the family. Thinking they won’t be long, Sarah locks the door with her brother inside and keeps the key herself, promising him her prompt return. Once within the Vélodrome d’Hiver – the indoor track those arrested were kept in – Sarah realizes she won’t be back to let her brother out. So begins the young girl search for escape.

This piece of narrative holds more than enough interest, helped by some beautiful landscape photography thanks to director of photography Pascal Ridao and an engaging, softly heartbreaking performance from Mayance. The recreation of life inside the Vélodrome d’Hiver during the round-up is unflinching. We watch humans survive in the worst of possible conditions, designed intelligently and economically by Françoise Dupertuis. Soon, Sarah and her family are sent to a camp, but she doesn’t give up her determination to return to her brother. Sadly, all of this flash back is over with plenty of time to spare in the present day. Not unlike Steven Spielberg’s Amistad, this film’s biggest problem is that those events which make the story one that needs to be told play only a small part of the product as a whole.

Akin to a bunch of white people discussing the worth of a group of black slaves, Jarmond spends the majority of the film talking with others about the tragedy of the Vel’ d’Hiv Roundup and the French government’s participation in it and the tragedy of Sarah and her family. Unfortunately, none of this becomes the central focus of director Giles Paquet-Brenner‘s film. Adapted from the novel of the same name by Tatiana De Rosnay, Sarah’s Key never feels like much more than exactly that: a literary adaptation.

Add to this a subplot concerning Jarmond being pregnant and Bertrand’s stubborn refusal to father another child and you have what begins to feel like too many ingredients. The heart of this generation-jumping tale is enough. Trimmed down to Sarah’s story and built upon from their, this could have been something memorable.

As it stands now, it has something to say about guilt and secrets and regret and the past and the present and journalism. And much more. There’s far too much tell and no where near enough show.