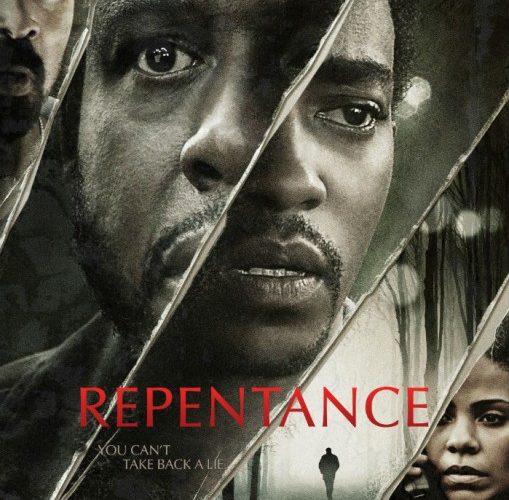 Set in gothic New Orleans, the first act of Repentance seems to offer more than its second and third acts deliver. One has to give director Philippe Caland points for starting strong with his top-notch cast, elevating what evolves in to a painfully simple thriller, pulling a bait-and-switch.

Anthony Mackie plays Tommy Carter, a “life coach” and author of a best selling self-help book. Carter is married to Maggie (Sanaa Lathan), a Yoga instructor. In the middle of the night (of course) Ben, Tommy’s brother, returns from the state penitentiary; he’s played by Mike Epps in one of his best performances. Ben is in deep, owing a few thousand to unseen gangsters, a debt his brother is willing to help him pay the legit way.

Tommy meets Angel Sanchez (Forest Whitaker), a man who has recently lost his mother, at a book signing. Angel asks Tommy if he’ll meet with him for a private session and reluctantly Tommy agrees. Much of the first act is spent on establishing the atmosphere from the middle-class bayou where Angel resides to a neighborhood on the verge of restoration, where Tommy and Maggie live. It’s almost unnecessary that Caland does all this work, since much of the film takes place in a basement. Growing increasingly hostile, therapy doesn’t take for Angel. When Tommy attempts to discontinue the sessions he’s drugged and thrown in the basement and suddenly an atmospheric gothic drama transforms into Saw with a little voodoo. What a shame.

Truth be told, the second and third acts lost me, as a tiny clue appearing before the main narrative doesn’t quite set up what is to follow. Therefore one must ask, within the genre conventions, is the film playing fair and does it matter? Yes, and no. Despite convincing performances, the fatal flaw is the attempt to meld two genres together that don’t quite work. The film sets itself up to be sincere, far from the horror thriller it evolves towards. When all becomes clear, I honestly stopped caring; it wasn’t so much the plot (we’ve seen this before), but the storytelling. What could have been a powerfully emotional film, indeed about repentance, becomes a (spoiler alert) run-of-the-mill revenge thriller.

Almost 20 years ago a technology called InterFilm launched, projecting films in commercial movie houses via LaserDisc. Audiences voted for what would happen next via a joystick installed in the theater’s cup holder. Mr. Payback, a very stupid film, was one of the first (and only) interactive films to be made. Repentance felt at times like this, with a rouge operator at the controls. It aims, perhaps, to shock and provoke a conversation all at once. Instead, Repentance is just dull.