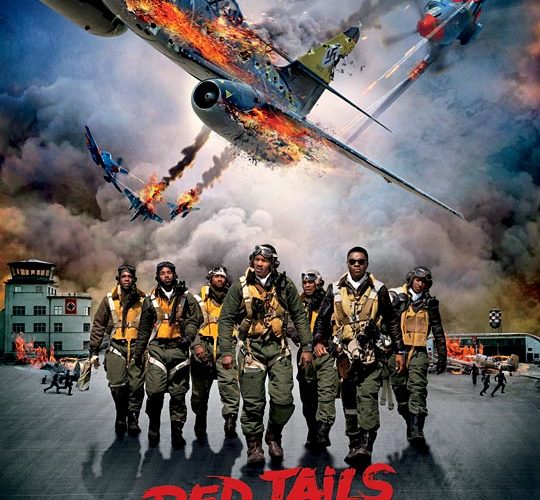 George Lucas‘ passion for Red Tails can’t be dismissed — it’s been a real journey to get this story to the big screen. For years and years he’s been discussing his love for this project, and, finally, he put his money where his mouth is and put down his own cash to finance this “based on true events” story. For that alone, Lucas deserves respect in making this dream project of his come true.

Unfortunately, the execution of Lucas and director Anthony Hemingway falls flat, and does so with a major thud. To put it even more bluntly, this would make for a perfect double-feature with Michael Bay‘s Pearl Harbor, which is actually a far more watchable — if still quite bad — film. In Red Tails, characters are painted as broadly as possible, there’s plenty of bloat, cringe-inducing (and tonally questionable) humor, and heavy-handed drama which couldn’t be more distancing and laughable.

This material is no laughing matter, but it’s as if Hemingway and Lucas are daring the audience to find humor in it all; it’s an uncomfortable experience. There’s plenty of lines, character beats, and stories which elicit pure chuckles, not emotions. Even the structure is baffingly comedic. When Ray ‘Junior’ Gannon, the young and plucky kid of the fighter pilots, is captured and brought to a military prison camp, we see his arrival and exit take place in a span of less than five minutes.

When escaping, the white captain tells him he’s been of great help — but when was he? What did he do to help them escape? Perhaps if Hemingway and Lucas showed instead of told — something this film is a big fan of doing — Gannon’s journey could have been as moving and inspirational as the film is so desperately striving to be. When a character dies, it’s never felt. The emotional stakes never contain impact because none of the characters ever make a memorable impact.

Actors consistently pop in and out, being completely wasted. Cuba Gooding Jr.‘s main character trait? Smiling while smoking a pipe, basically. On the other side is Terrence Howard fighting hard for his men to get the respect they deserve… and that’s about it. Even the fantastic Bryan Cranston shows up as a smarmy racist — for around two minutes — to act as a smarmy racist.

Red Tails represents the worst type of “war” film. There’s a scene in the film which Steven Spielberg‘s beautiful War Horse deconstructed in one of last year’s best scenes: The use of “Fritz” — when referring to all Germans Spielberg put down — reminding us that, despite the fact that they are your enemy in the war, they’re still people with names, families, and personality. In Red Tails, there’s none of that. The characters cheer as they kill their enemies, and the only German character we see is laughably evil. But, then again, the whole film is laughable, so Red Tails going beyond the cliches of the genre would have been inconsistent.