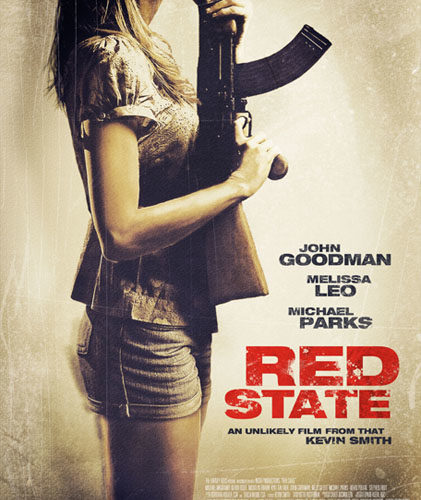 Red State is like a girl you really want to love, if only you could look past her myriad of flaws. She’s promising and admirable. She’s spontaneous, takes chances, is very funny a lot of the time and sometimes extremely wise. Unfortunately, she’s also so many other things.

There are some old tricks Kevin Smith has made a career out of that are not present here in this creative experiment, for better and mostly worse. The writer-director is going outside of his comfort zone, and that deserves recognition. That said, Red State plays as though Smith was, in fact, uncomfortable.

It is at this point that the film evolves into an uneven and uninteresting ensemble film. There’s the federal agents – who are led by the morally-muddled Joseph Keenan (John Goodman), a local town sheriff and the not-so-subtle Fred Phelps stand in, Abin Cooper (an initially frightening-turned-goofy performance by Michael Parks). What do these villains have in common? They are all painted in broad, one-note strokes.

And the biggest issue: what is Smith attempting to say about these “people”? That government officials are as vile as the crazed Christians they murder in the film? Smith treats most of these characters as future body bags instead of real, understandable people. Some moments of violence that turn these caricatures into dead bodies are quite fun and unexpected, but contain no meaning or weight. And while there’s a likeable meanness to how Smith treats his characters, especially the teen buddies, it winds up looking unfocused and sloppy next to the undertones. Smith attempts to capture dark and relevant ideas, but he doesn’t know what to do with them. Yes, the man has a penchant for broad humor, but  – there’s a poignancy to some of his earlier works. Clerks, Dogma, and his best film, Chasing Amy, all felt like a writer having something genuine and honest to say. Dogma did what Red State fails to do: ask interesting questions underneath all of the silliness.

Smith turns his unfocused satire/not-clever-enough comedy/not-brutal-enough horror movie into an full-on siege film. The battle becomes the worst type of gun fight: the one where the audience has no clue as to what is physically going on. Who’s shooting at who? Why should I care? There are no stakes involved. It wouldn’t be so much of a problem if Smith directed competent action. There’s no sense of geography or unnerving tension. It all involves characters Smith barely lets us know shooting out of windows – usually in distractingly blocked-in frames – at… well, who knows?

The divisive filmmaker and online persona has proven himself a writer capable of excellence, and as a director capable of bringing those words to life. He has captured honesty and realism on making small, personal films. Something like Red State requires a delicate and precise eye which, sadly, Smith doesn’t have.