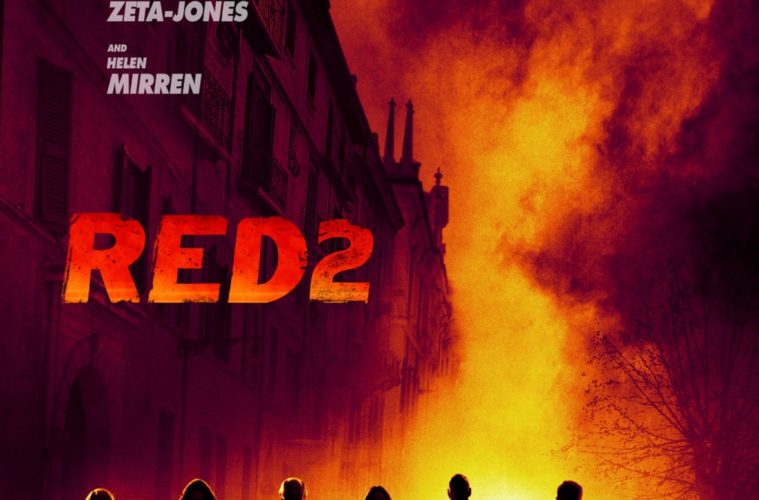 For DC Comics imprint Homage’s Red, screenwriters Jon and Erich Hoeber turned Warren Ellis and Cully Hamner’s original work into a surprise box office hit with an inspired cast of aged, former CIA operatives presently labeled “Retired: Extremely Dangerous.” The goal with any successful comic book adaptation is then to green light a sequel in the hopes lightning will strike twice in a bigger and better way. Like many before them, however, the task of expanding on a winner is never easy when nonexistent expectations are raised to the point of prematurely breaking ground on a third installment. Rather than stick with what worked—a fun action romp set stateside amongst internal government corruption—the Hoebers looked to branch out into a globetrotting, transition-heavy adventure that plods along where its predecessor excited just three years ago. The great thing about sequels is their return audience making extensive exposition unnecessary. Red 2 doesn’t need to reintroduce Frank (Bruce Willis), Marvin (John Malkovich), Victoria (Helen Mirren), and Sarah (Mary-Louise Parker) because we’ve already gone black-ops with them before. The gang just has to find a reason to get back together once their mundanely suburban existences return with a vengeance. Opening at Costco—the first major brand placement with Papa John’s following suit later on—we see how quiet homemaking has sucked the passion right out of Frank and Sarah’s relationship. Thrust together while running for their lives, now they’re discussing backyard grills and jumbo shrimp with fake, indifferent smiles. Thankfully, Marvin’s paranoia still proves more than senility and assassins soon arrive to take them out again.

Appearances are deceiving, though, as this welcome dose of familiarity turns into anything but very quickly. While Willis engages in a rollicking good bout against government hitman Jack Horton (Neal McDonough) and his CIA cronies to escape an interrogation about a Project Nightshade of which he thinks he knows nothing, any shred of adrenaline evaporates into a second act devoid of action besides a Parisian car chase more slapstick than Fast & Furious. We meet hired assassin Han (Byung-hun Lee), discover Victoria has accepted a contract to kill Frank, and learn Willis’ tough-guy badass is putty in the hands of Russian spy Katja (Catherine Zeta-Jones) all while hopping from America to London to Paris to Moscow with overdone animated wipes reminding us every ten minutes we’ve changed locales. And none of it really matters. With only Malkovich’s eccentric sociopath to entertain while we bash our heads into the wall because Willis still can’t understand his girlfriend enjoys the danger, Red 2 progresses through a series of cutely funny events that unfold like a laundry list of checkpoints towards the final thirty minutes rather than a natural cause and effect journey. David Thewlis enters for a misguided scene of “I’m better than you” between Parker and Zeta-Jones; Brian Cox reprises his role from the first film with all the panache his Ivan possesses but none of the meat for his inclusion to matter; and Byung-hun Lee effectively kicks butt with a cooler door. We crawl through watching as the set dressers transform Montreal into four countries all to finally meet Anthony Hopkins’ batty genius Bailey so the real plot can begin.

From here the final act ratchets up the tension with its weapon of mass destruction threatening to annihilate the former Soviet Union. Malkovich and Hopkins ham it up hilariously and the type of fast-paced action we remember from Red makes a too little, too late appearance. Characters become gimmicks, running gags refuse to die—Frank stealing Han’s plane shouldn’t be the basis for countless, lazy references—and intriguing themes like turning Sarah’s innocent into a spy with a gun are glossed over in a way that makes any attempt at empathy elsewhere impossible. And while Karl Urban is a great actor who portrayed a fun mirror in the first film to remind these old-timers of their former no-questions-asked devotion to country, he wasn’t good enough to warrant three antagonists to make up for his absence. Director Dean Parisot adequately makes everything look nice—save some obvious CG in scenes with fast moving cars and actor close-ups—but sadly never has enough to forgive the script for biting off way more than it should in pacing. What seemed a simple plot in the trailer is really a convoluted one I’d ruin by picking out exactly what’s misleading and the sheer number of players involved only muddies the water while the constant traveling destroys any momentum it does build. Red 2 is chock full of red herrings with none more glaring than the one tricking us into thinking the screenwriters’ return would retain the tone and feel of the first. The components are here to do so, but each piece is misused in a way that renders the experience an unfortunate disappointment.