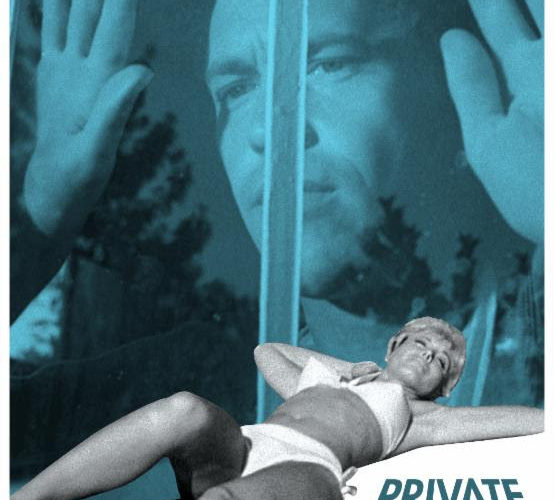 Over the course of his career, the notoriously hard-living Warren Oates palled around with Dennis Hopper and served as one of many Sam Peckinpah muses. His relationships with Hollywood bad boys extended to John Milius, who directed him in the memorable title role for the B-grade biopic Dillinger. By the time he passed away in 1982, he had over 120 film and television productions to his name.

But in 1960, Oates was a struggling young actor whose broad, bulldoggish face and crooked-toothed smile didn’t exactly scream movie star. He was, however, perfect as a counterpart to Corey Allen in director Leslie Stevens‘ lost film Private Property.

Nearly six decades after its initial release, the black-and-white gem has re-emerged thanks to efforts of the UCLA Film & Television Archive and Cinelicious Pics, a small company with a reputation for digging up valuable works doomed to obscurity. Their latest find provides a glimpse into a time when underground movies tested the boundaries of censorship and signaled a shift away from the out-of-touch studio system to an era defined by the provocations of the counter-cultural movement. Heightened by a rollicking jazz soundtrack and dialogue peppered with beatnik lingo, the film sets out to rattle a few cages with subject matter fit for a drive-in theater.

All cultural relevance aside, Private Property excites as a pulpy, proto-erotic thriller set against the hazy vistas of Southern California. Allen, who played the knife-wielding teen gang leader in Rebel Without a Cause, takes up a switchblade again as Duke, a sinister drifter dutifully followed by his creepy, dim lacky, Boots (Oates in an uncharacteristic role). The two rob and threaten their way to a posh Beverly Hills neighborhood, where they secretly squat in an empty house overlooking a backyard where Ann (Stevens’ real-life spouse Kate Manx) swims and suns her days away as a bored, kept housewife. Over the course of a few days, Duke slinks into Ann’s life, setting off a power play bubbling over with salacious fantasy and homoerotic desire.

The barely contained sexuality stretches its limits in moments that would be laughable if they weren’t so self-aware – when a writhing Ann tries to get her oblivious husband’s attention by cooing, “There isn’t any wood,” you know she’s not talking about timber. Over dinner, she fondles a candlestick so thoroughly it’s a wonder the wax doesn’t melt under her grip. Additionally, the film hints none-too-subtly at the reality behind the two male protagonists’ relationship when domineering Duke says Boots is waiting for a “rich daddy.”

The overtness recalls the gloriously upfront titillation of Elia Kazan’s Baby Doll – a film released four years before – and the carnal undertones found in Alfred Hitchcock’s oeuvre. While Private Property, with its tawdry edges and jarring, out-of-synch ADR, lacks the studio polish of its influences, it puts a wonderfully dirty spin on their voyeuristic style.

Stevens enhances the steamy vibe with high-contrast noir lighting and hyper-stylized shots that would not look out of place on the Outer Limits, the groundbreaking sci-fi series he later went on to create. An extreme close-up on a half-empty bourbon glass serves as a surrogate fisheye lens, warping the room and foreshadowing the twisted deviance to come. When a long take of Duke and Ann boozily dancing culminates in a kiss redolent of hardcore sex, it’s clearly meant to play on the viewer’s guilt for taking pleasure out of something so forbidden.

Besides its role as a bold early foray into explicit territory, the film also serves as an eerily prescient vision of a sexual revolution gone wrong, and of a California built on peace and love degenerated into violence and murder. That the gorgeous, glamorous Manx committed suicide a few years after Stevens directed her adds to a discomfiting aura elevating the film as an early-60s indie more than worthy of attention.

Private Property is screening through July 7 at Film Society of Lincoln Centre and will embark on a cross-country screening tour. See the Cinelicious Pics website for details.