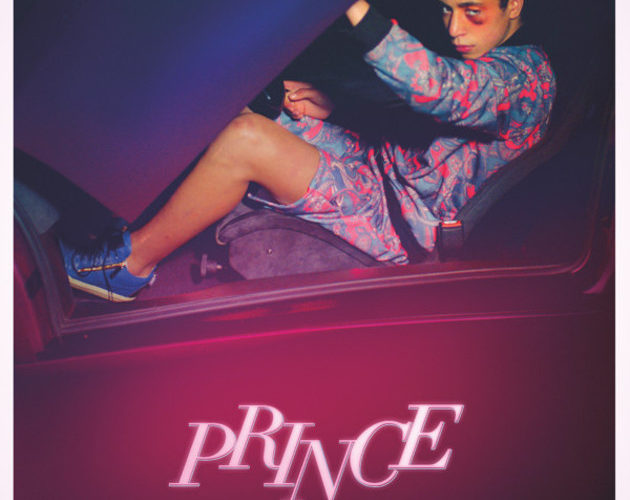 By way of Vice Magazine cred, and “Special Mention” kudos from a jury of teens at the Berlin Film Festival, comes the Dutch film Prince by newcomer Sam de Jong. It’s a coming-of-age tale set during our revival of 1980s graphic design that could be sold for aesthetic scraps, or re-branded as an extended shoe commercial. It isn’t so much the introduction of brand new voice, just that of another one.

Dutch-Moroccan teen Ayoub (Ayoub Elasri) struggles with his place at the bottom of the totem pole in his Amsterdam neighborhood. He and his chummy quartet (including Jorik Scholten’s Franky) spend their time goofing around with each other, gnawing on sunflower seeds (or something similar) or making out with invisible women more than they do socializing with the opposite sex. By no coincidence, they’re pushed around by the loyal thugs, which Franky’s brother is a part of. To rub in Ayoub’s lack of machismo in, Ayoub has a crush on local girl Laura (Sigrid ten Napel), who is dating one of the local ruffians, and seems impossible to woo.

With Ayoub’s character depth ending there, Prince attempts to create his character from his dynamics with other people. He has a half-sister Demi (Olivia Lonsdale) that he is very protective of, and tries to even boss her around as “man of the house” when it comes to her private life. At the same time, his mother Saskia (Elsie de Brauw) is miserable, failing to connect with men on online dating services. Sometimes, Ayoub visits his father at night, where the old man is strung out by a streetlight, babbling to Ayoub, ultimately providing him an idea of a man that he doesn’t want to be.

Tempting Ayoub’s angst is local wacko gangster Kalpa (Freddy Tratlehner), whose purple Lamborghini has an ominous presence in the neighborhood. Tired of being small-time and without the muscle that gives people power and respect, Ayoub starts to spend some time with Kalpa, where he gets a brief taste of the supposed good life. (He also gets a new pair of shoes.)

It’s worth noting that Ayoub’s story is packaged with a hazy fairy tale connection, in which Kalpa is some type of big bad wolf, and Ayoub is some type of … prince. This attempt at elevating the pubescent tale beyond regular reality only makes it even more like Nicolas Winding Refn’s Drive. The two films share an aural taste already (though Drive’s soundtrack is better.) Now, they’re both meant to be viewed as synth pop folklore.

Prince is like a Eurotrash hood movie, ineffectively placing a post-80s costume design and pastel color palette inside script elements as old as Mean Streets or something like Juice. (Those include: the clash of young men, the violent atmosphere they have made for themselves, and the way of the gun, that almighty instrument of power.) But de Jong only has a style, not a spirit, within his adaptation of these ideas. There’s no grit to this tale in its calculated visuals, or casual sense of story. The life within its curious themes only gets lost in the story’s sheen, the characters lacking immediacy.

de Jong’s tale goes to some desperate lengths to be taken seriously, its sense of tone lost in the process. The provides little room for levity, and its more playful choices backfire – including the sound of thunder as a type of warning, or an extended use of Andrea Bocelli’s “Time to Say Goodbye” in the film’s last big scene. This particular piece of music, used more genuinely in Step Brothers, only turns this film’s gravest moment into a vacancy, in which Prince’s casual relationship with meaningfulness has caused serious drama to skip out. It’s a prime example of when irony only makes a fool out of the ironic.

The sharpest directorial decision to be found here is a very slim list of extras. Prince evokes the narrow perspective of growing up by solely focusing on the people who directly enhance our environment, with barely a stranger to be spared. It takes place in a neighborhood, but it’s the kind where you know everyone there, and it becomes your turf. It gives the film’s slightly elevated style a primitive quality.

A dated debut, Prince is all atmosphere. It boasts a totally rad, ultra far out ‘80s score (that can evoke “My Bonnie Lies Over the Ocean” and then later “I Like Big Butts”) and places pastel-adorned characters front-and-center of a frame with scant narrative drive. de Jong can’t find solid ground within literal expression (“It Takes a Muscle to Fall in Love” is the film’s main statement, and the Spectral Display song heard three times) but it’s lost in trying to find grace within the obscure. For now, he’s like Harmony Korine, sans any wonder.

Prince opens on Friday, August 14th in theaters and on VOD.