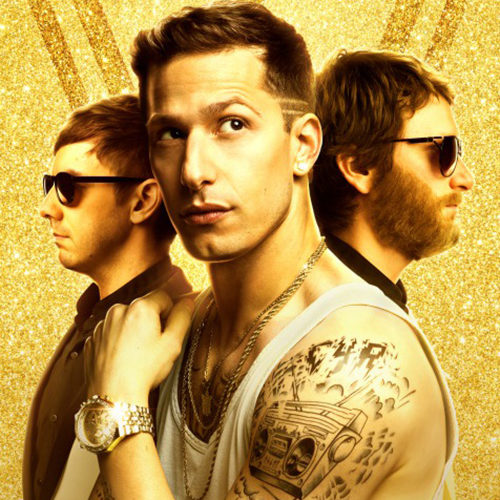 It’s all about #brand loyalty for The Lonely Island in their first “official” movie, Popstar: Never Stop Never Stopping, which stays true to the absurdist, bite-sized comedy that made their name. The musical comedy trio – comprised of Akiva Schaffer, Andy Samberg, and Jorma Taccone – has been around for over a decade, breaking out through their digital shorts on Saturday Night Live. Taking clear inspiration from recent music “bio-films” like Katy Perry: Part of Me and Justin Bieber: Never Say Never, Popstar concerns a…pop star…named Conner4Real (Andy Samberg), who has gained worldwide success despite a general terrible-ness in his musical output. His critically-adored and culturally-loved origins come in the form of the boy band Style Boyz (Schaffer, Samberg and Taccone) who had a popular dance move (“The Donkey Roll”) along with a slew of hits. Cameos from the likes of Usher, Nas, Mariah Carey, and countless more (seriously, they are never-ending), accent the influence of the Style Boyz.

The film begins at the peak of Conner’s fame, the moment before the fall. And while there is a narrative through-line – will the Style Boyz get back together? – the film is clearly broken out into smaller moments, so the laughs hit hard and the misses don’t linger for too long. Schaffer and Taccone share directing credit here, and were clearly given free reign, including full musical numbers for a song like “Finest Girl,” in which a lovely lady asks Conner to screw her like the U.S.A. screwed Bin Laden (in a manner of speaking).

Highlights include Tim Meadows as Conner’s long-suffering manager, Sarah Silverman as his profit-focused publicist (“I want Conner to be everywhere. Like oxygen…or clinical depression”), and a clever cameo from Justin Timberlake. Taccone and Schaffer steal a couple of scenes themselves as Owen and Lawrence, former members of Style Boyz. Owen now DJs for the solo Conner, while Lawrence lives on a farm, seething with rage (“I can’t believe how many times I’ve thought about killing [Conner]”). But then again, the idea of anybody “stealing scenes” is a bit of a stretch. This is all about moments and how you, the viewer, like getting your laughs. If watching Seal get torn apart by wolves is your thing (as it is mine), smile wide. If not, this might not be for you.

Samberg and company are keen observers of pop culture and every facet of its insanity, doing their very best to out-size that which already feels larger than logic. They don’t always succeed, but when they do, it’s more than worth it.