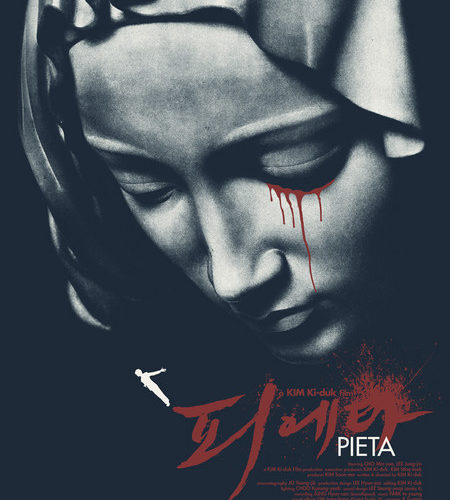 Kim Ki-Duk’s Pietà may draw its title from a famous Michelangelo sculpture depicting the Virgin Mary embracing the body of Jesus Christ, but the movie itself is anything but sacred. Ki-duk, who won the Golden Lion at Venice for his new film, disrupts his quiet and meditative streak with a sordid tale of redemption and atonement that returns to the violent shock tactics of early work like The Isle.

Any audience relief had at the merciful absence of fish-hooks will be short-lived, as Pietà delves deep into misery with its tale of Kang-do (Lee Jung-jin), a repugnant loan shark who takes grim pleasure in brutally maiming those who can’t reimburse him. For most of these people, who have already suffered at the hands of a merciless financial system, those crippling incidents mean the end of their meager livelihoods and, in many cases their lives. None of this deters the callow and sadistic Kang-do, who would have likely continued living in depraved squalor while cashing in the insurance policies of his victims were it not for the sudden appearance of a woman who insists she is his long-absent mother. In some heavy-handed and viscerally unpleasant passages, Cho Min-soo’s maternal figure endures her alleged son’s dismissal, cruelty and psychologically disturbing mind games in hopes of breaking through his dark exterior and rescuing the wilted, distorted soul within.

There’s so much going on in the first hour of Pietà, that’s it’s almost impossible to not be engaged by at least some of what’s onscreen, even if that often means being simultaneously repelled. Ki-Duk may repeat several of the same grand and sensational beats he expressed early in his career, but they are handled with a certain grace and patience that his younger self rarely indulged at the time. Of course, the director  has also come through the water and the fire since then as an artist; crafting masterful and potent works of art like  Spring, Summer, Fall, Winter . . . and Spring, struggling  with depression and self-doubt, and capturing that experience  onscreen with the autobiographical Arirang, which laid bare his pain and dissolution in harrowing detail. This combination of art and life experience has influenced and enriched the texture of Pietà, and if many of the technical aspects, like a cramped marauding camera-style, feel a bit rushed, they are compensated by a confident and assured hand behind the scenes that pushes and pulls on the performers and the narrative to generate an oppressive sense of spiritual suffocation and subsequent resurrection.

When Ki-duk is vividly exploring the deficiencies of Kang-do, and the countering force of Cho Min-soo’s unconditional care, Pietà threatens to become the dramatically triumphant work it so desperately wants to be. The aesthetic elements are well staged, and while Lee Jung-jin isn’t nuanced enough as an actor to completely sell Kang-do’s jagged, ruptured humanity, Min-soo is a disarming powerhouse that ensnares the film and electrifies it, making her character durable enough to survive the stilted revenge portions of the story.  Where Pietà fails is in its reliance upon shock and antagonism to provide transcendence; in working out whatever of his demons remained, Ki-duk defaults to those novice artistic crutches, namely bone-crushing violence and twisted, taboo-shattering perversion. This skin-crawling menagerie of misdeeds, which includes mother-and-son mutual masturbation, self-mutilation, forced cannibalism, and disfigurement via industrial machinery, never achieves a sense of real gravity and ultimately dulls and weakens the emotional edges that Ki-duk initially exposes. These bullish elements are intended to pound the viewer into submission, making them pliable enough to accept the dubious spiritual motifs, including that cracked notion of Kang-do and Cho Min-soo as a kind of Mary and Jesus analog. Unfortunately, there’s never a sophisticated structure on which to hang all of this psychic damage, and the result is a surface level exploration of depravity and salvation that paints its savagery as substance. In addition, it’s hard to fully abandon the suspicion that the film would be more gripping and explosive if glimpsed completely through the eyes of Kang-do’s unfortunate victims, who are exposed to most of the real horror at work.

Within the current caste of Korean filmmakers, Kim Ki-Duk remains a true original, and Pietà shows restraint and consideration (no, really) that isn’t always abundant in the country’s darker output. Still, the film is only an engaging oddity, a minor work that proves Ki-Duk has not lost his considerable skill or appetite for pushing boundaries but does nothing to suggest he’s up to anything other than his old tricks. What may seem naked and painfully raw to some observers comes off to these eyes like another act of hiding, the great director not quite ready to emerge from the shadows of his own dark days. Until he manages another masterpiece, one could do worse than this challenging near-miss that best serves as a backdrop for Cho Min-soo’s unnerving performance.

Pieta is now playing on VOD and in limited theatrical release.