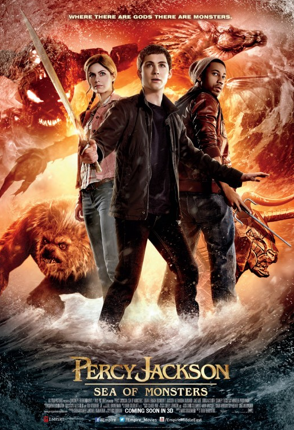 For the majority of Percy Jackson: Sea of Monsters, the titular character spends his time moping over the uncertainty of his heroism. Percy, played again by genial Logan Lerman, is starting to wonder if his original deeds were all that great to begin with; anyone who saw the first movie might be enclined to empathize with him.

A fun but overlong slice of second-tier YA fantasy, the original Percy, as directed by Chris Columbus, was a straight-forward but undistinguished take on Greek myths and legends, based off the charmingly modern book series by Rick Riordan. Medusa became a sunglasses-clad tourist trap fixture, the Lotus Eaters the proprietors and patrons of a swanky Vegas casino, and Hades had the wild rock-god swagger of Steve Coogan channeling Mick Jagger. There was just enough juice and humor to outweigh the more generic hero’s quest and to disguise the fact that Lerman, while amiable, was a bit of a wet blanket in the hero department.

Armed with the right name for taking over this particular franchise, Thor Fruedenthal steps into the director’s chair and plots a brief, colorful course through this Sea of Monsters. I imagine it will be difficult for many over twelve-years of age to get seriously excited for this fantastical pastry-puff, but it more or less does what’s expected of it. For modern kids, 3-D larks like this and Journey 2: The Mysterious Island are just about as close as they usually get to the old-school goofy charm of Ray Harryhausen. Fruedenthal, coming off the Wimpy Kid movies, keeps everything zooming along with a cheerful, natural energy. The film picks back up with Percy at his home in Camp Halfblood–a training ground for children with Celestial and human parentage–going through the daily grind, and wondering if he was ever worthy in the first place. Percy has got a great mentor in centaur Chiron, played by Anthony Stewart Head as Rupert Giles with a horse’s ass, and faithful friends in Grover (Brandon T. Jackson) and Annabeth (Alexandra Daddario) , but he spends most of his time in self-doubt, bemoaning the fact his father Poseidon never responds to him. Of course Percy still has that neat power that Poseidon’s heritage bestowed him; he can control and wield water like a weapon, and if immersed in it, fatal wounds can be healed. You’d think this would make him nearly the star pupil, but he’s usually runner-up to Clarisse (Leven Rambin) the driven daughter of Ares, the God of War. Trouble—or opportunity depending on your perspective—comes in the form of new visitors; one is Tyson, Percy’s cyclopean brother from another mother who Grover refers to as “ocularly impaired”, and the other is Luke (Jake Abel) the lightning thief and rogue demi-god from the first movie.

Luke shows up with a monstrous, bronze Colchis bull and damages the protective shield around the camp, announcing his plans to ultimately revive the Titan Kronos. Chiron patiently explains to Percy about a prophecy that sets him up for either success or failure, depending on how you read it (Head must have felt a great sense of déjà vu in these portions). Soon, Clarisse is sent out with her own team to retrieve the Golden Fleece, the only thing that can restore the shield, and Percy, Annabeth, Grover and Tyson are striking out on their own. A brief meeting with the God Hermes (Nathon Fillion) reveals that they are headed to the Sea of Monsters, to grab the Fleece and thwart Luke in the process.

Sure, there’s an accomplished visual aesthetic and some immersive things done with the 3D, but Fruedenthal’s film really feels like it was meant for television where it’s stock characters could stretch their legs and explore their destinies a little more. The edges of the quest have been peopled with quirky character actors and faces often seen on the small screen. Fillion’s Hermes is the best new bit, and the actor gets all the best lines—including a zinger delivered directly at the camera, playfully ribbing Fox about a certain bug-titled SF show—even if he’s limited to one scene and no familial closure with his troubled son, Luke.

Head is good as the stern overseer, and he’s delightfully matter-of-fact, much as he was in his Buffy days. When Jackson is questioning his ability and destiny, Chiron shoots back with ‘Well, that’s the question isn’t it?” Also playing to his strengths is Stanley Tucci as the easily riled Mr. D, another victim of too little screentime. Lerman, Daddario and Jackson are, again, limited to being action figures instead of characters. Abel barely registers as the heavy, but I liked Douglas Smith’s optimistic turn as the cyclops Tyson.  The adventure itself feels recycled as much from comic books as classic Greek mythology, but a few faithful bits will make your inner scholar smile. The creatures here are definitely the highlight, including a shimmering, rainbow hippocampus that careens gracefully through ocean waters, hurtling forward as if it were late for a Harry Potter casting audition. Later, there’s the intimidating sea-monster Charybdis, who looks like Return of the Jedi on the outside, and The Empire Strikes Back on the inside, a big, burly Manticore, and the hulking, dread-locked Polyphemus, voiced with craggy ill-will by none other than Ron Perlman. While I appreciated the monsters more, the film often wants to hurtle past them, rarely slowing down for that level of incidental detail that personified and endeared Harryhausen’s creations to us. Only one of these moments, with the precocious hippocampus sidling up to the yacht so Tyson can throw it a well-earned snack, has anything bordering real personality. When the dark god shows up in the last act, he’s mostly like a giant video game end-boss.

What really undercuts Percy Jackson: Sea of Monsters is a strange desire to put the characters in almost constant mortal peril, only to draw back and show us no one was hurt at all. There are numerous instances where someone dies, only to return less than five minutes latter, occurring so frequently, that by the end even an early, poignant moment of sacrifice has been rendered moot. In an effort to be overtly kid-friendly, I suspect that Monsters will actually alienate many children who, like their adult counterparts, don’t really appreciate being jerked around.

At the end of the day, Jackson has this going for it; no one is expecting class A heroics. Instead, they will happily settle for the Disney Meets SyFy discount adventuring we get here; it’s hard to see if that’s progress or not.