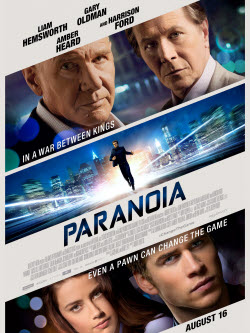 When your film is called Paranoia and the marketing boasts heavyweights like Harrison Ford and Gary Oldman facing off with one another, it’s a foolish move to turn around and deliver a milquetoast techno thriller trying to coast off Liam Hemsworth’s modest star power.

If you are still one of those luddites fretting over the day that smart phones end up leveling our society, then maybe something in Robert Luketic’s by-the-numbers movie will actually grab you. For everyone else, Paranoia is basically a reminder that years ago Robert Redford made a fun little tech-centered spy movie called Sneakers, dealing with the same issues in a far more entertaining fashion. One would be better off just watching that again than wasting your time on this clunker.

Ford and Oldman are back together for the first time since Air Force One, playing the rival CEO’s of competing tech firms who draw young, ambitious climber Adam Cassidy (Hemsworth) into their duplicitous web of double and triple crosses. Of course, the unlikable Cassidy is never smart enough to pick up that his previous boss Oldman (whom he screwed over in a moment of ill-planned revenge) and his new boss Ford are both using him to achieve an agenda that positions him as collateral damage along the way. By the time Adam figures out that Ford’s shrewd honcho Goddard has his own designs on the would-be mole, he’s in so deep with Oldman’s Wyatt that his choices are lose-lose. That’s even before the FBI gets involved and want Cassidy to ferret out Intel on both of the shady industrialists. Throw Amber Heard in as an ad exec making eyes at Hemsworth and Richard Dreyfuss in a thankless bit as his sick father and you have a perfectly wasted cast. As played by Hemsworth, Adam makes it very hard to believe that any of these characters would trust or employ the man in this capacity.

Like some old-school John Grisham movie, the hero keeps discovering new ways that his safety and security have been compromised, often by bad guys using the most run-of-the-mill and innocuous technological dependencies against him. The script wants to hasten the urgency of Adam’s plight and expand the danger, but there’s never much intensity to the proceedings because we don’t care about any of the characters, and the best scenes are clearly sparring sessions amongst actors we like, not fully-fleshed out people whom we’ve come to empathize with.

Ford and Oldman are not newcomers to cashing paychecks or highlighting drivel with a walk-on wink or two, and that’s more or less what they are doing here. Director Luketic, whose career highlight was Legally Blonde, tries to maximize the impact of their presence but can’t ever shake off a plot that keeps getting in the way. Hemsworth is simply the wrong guy for the lead role; this specific character needed a more seasoned, charismatic actor that could take the paper-thin archetype and juice him up a bit. Right now, he’s the least believable thing in a constantly implausible jumble. Heard is playing another case of eye candy intended to pad an anemic drama, while Embeth Davditz does add some spice as Oldman’s corporate fixer. Fans of consistency will balk at the ways modern connectivity is painted first as an all-seeing evil and then discarded when its presence would get the characters out of easily sorted jams. The plot twists require no finesse or careful cohesion, so we disregard them as they happen because there’s no effort made to earn our involvement or credulity. If there’s nothing hideously embarrassing about Paranoia, there’s nothing really right either.

Despite the talent on the screen, there’s absolutely nothing gained by watching the full film versus a trailer or highlight clips of Oldman and Ford. Paranoia as a concept is great fodder for a film, as is exploring our complacent spiral into technological dependency, but don’t be fooled; this movie isn’t concerned about anything more challenging than how to draw a few late summer bucks from the action-thriller crowd. Stay home, turn off your cell phone, read a book instead.