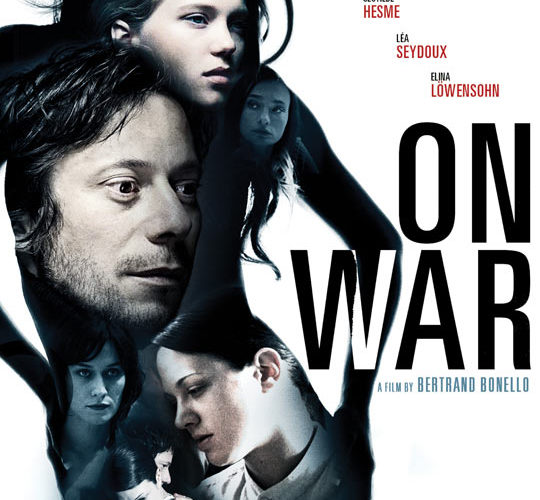 The English language makes very few appearances in Bertrand Bonello’s On War, and it’s to the film’s credit that their possible connections and distribution feel like no accident. There’s an opening quote (“If I wasn’t Bob Dylan, I’d probably think that Bob Dylan has a lot of answers myself”); there’s the musician’s Manchester Free Trade Hall performance of “She Belongs to Me” at film’s end; and, somewhere in the middle, Elina Löwensohn’s Rachel offers a strong opinion (“Fuck Freud”) that goes unnoticed during a party. Do the things placed after, before, and in-between these — the story of a frustrated artist clumsily seeking his identity, the doings of a forest cult devoted to the war-like process of grasping your sexual being, and the significant changes that each party brings to the other — align to create a clear psychological portrait?

There are answers, if not an answer, scattered among the two hours of this film — which is only now being released in the U.S., some seven-and-a-half years after its debut — and the absence of consistent, concrete ways to approach the material is as essential to its construction as the pleasures it ultimately affords. And so On War‘s trajectory is both purposefully vague and weirdly specific, not least of all because its protagonist is a French film director named Bertrand. As scripted by Bonello and embodied by Mathieu Amalric, he’s a nervous, reticent type working on a new project that he can neither explain nor give anyone a good reason to believe in. Yet his research process — which includes frequenting a coffin shop, and which leads to a Buster Keaton-esque gag that this movie never quite lets you shake the horror of — brings him in contact with Lewis (Guillaume Depardieu), a hair-bunned, shifty man who informs him of “The Kingdom,” a place where, as is laid out in coded terms, one’s true self can be found.

On War‘s resolute, at times outright fierce ability to keep transforming itself begins upon his arrival to a cult that most distinctly recalls Patrick McGoohan’s The Prisoner. As led by Uma (Asia Argento), The Kingdom seeks a way for its members be “dazed by life.” Argento plays the part like a God descended upon Earth to grant it knowledge of sexual power, but her presence and their mission statement — “Pleasure is something you have to win, like a war. So you have to fight like a warrior.” — leave greater impressions than anything that’s actually done. Bertrand and Bonello seem immediately curious of this environment, though the latter’s skepticism is the order of things. The long, extended shots in which this carefully designed place, its disciple-like people, and their enlightened activities are captured center more on the absence of thought — the absence of value, of genuine discourse that stretches beyond platitudes and general promises of a better life — and are scored, by the helmer himself, to a droning sound that’s like a brain gradually falling to pieces. When little is happening in Bertrand’s real world and few things can be understood in The Kingdom, the belief that no escape can be had begins hanging over every individual piece.

Most grueling is the ambiguity Bonello builds: Bertrand’s transition from cipher-like to something decidedly different, and initially someone more connected to his environment, raises the question of how much The Kingdom can help its participants. This is initially a benign question, but in retrospect permits the alien activities — e.g. a trance-like dance, set to that same music, where participants convulse and become “exalted” — that might otherwise be embarrassing to suddenly carry a great psychological import. Upon entering the real world once more, few things in On War play the same. While the length of shots, the distance between camera and subject, and the placid tone of these performances don’t necessarily shift in any significant way, everything that went into The Kingdom — love, sex, friendship, self-assertiveness — comes out the other side misshapen, to the point where nothing Bertrand asserts can be trusted.

Following that to a logical end may be where Bonello encounters trouble, but this film’s slippery sense makes uncertain the extent to which On War’s new register — one of newfound verbosity and, in the case of an Apocalypse Now homage, brief (albeit total) breakdown — constitutes a poor choice. In light of the oddities heretofore-presented, it becomes, for better and for worse, hard to take a resolute position on what’s both consistent and slightly unsatisfying. Nevertheless, a film about fractured identity, sexual frustration, and psychoanalysis that, yes, can transform those three uses of the English-language into signifiers absolutely should find a place in dissatisfaction. This is not only a signal of Bonello’s uncompromised journey that a clear trajectory springs forth, but evidence of his skill for working through muck to reach something resolute. The final feelings are less of dissatisfaction and more, on the viewer’s part, a recognition of Bertrand’s temporary contentment — in some way, the scariest place a movie about cults and the savage grasp of emotional stability could choose to end.

On War will enter a limited theatrical release on Friday, December 4.