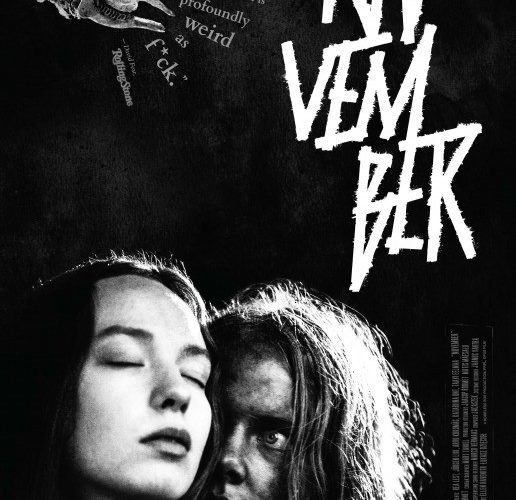 What is the point of having a soul if everyone around you doesn’t? That’s the central question asked by Rainer Sarnet’s November, a bleakly told Estonian fairy tale tragedy adapted from Andrus Kivirähk’s novel Rehepapp. At its core is romance — the kind based in unrequited love that will never bear fruit. Liina (Rea Lest) is a peasant girl trying to catch Hans’ (Jörgen Liik) eye while his sights are affixed well above his social stature upon the German Baron’s (Dieter Laser) visiting daughter (Jette Loona Hermanis). They each leave their homes at night to watch the objection of their affection, the latter hiding in the shadows behind the Baroness as she sleepwalks and the former transformed into a wolf so she may spy in plain sight.

These two are seemingly the last young children in a town ravaged by the black plague. Many believed them a perfect match to carry their people’s legacy into the future should the rest succumb to disease. Even their dead mothers think so, their ghosts arriving at night in white to connect with the living and feed upon food they can no longer enjoy. But life is never so easily planned when the present weighs so heavily. Besides sickness knocking at their door is a state of poverty they’ve known too well for generations. Survival has become more than merely the aspirations of youth. It’s also a struggle for old. It seems like everyone sells his/her soul to live without realizing life without one is merely a hollow trick. I don’t say words like ghosts and souls in metaphor because Sarnet allows his tale of love and pain to exist within the fantasy world of magic and evil it so fully strives towards. The film opens without a shred of subtlety upon a creation made from three scythes oriented in a radial pattern with skull at its center rolling into Liina’s father’s barn to wrap its chain around a cow’s neck. The sight is amusing and terrifying at once, the situation a joke set within a harsh reality that’s taken with the utmost severity by its inhabitants. This contraption is a “kratt,” a creature formed by inanimate objects for which a demon can bring to life with the inherent soul within it … for a price.

The poor farmers need these kratts as laborers and they are always in the background begging to fulfill their duties with threats of harm. Some of the citizens will go to the crossroads with a willingness to sign their own souls away in blood while others bring currants to squeeze with treachery. But you can only fool the devil so often before he catches on. You can only trick a plague taking the physical form of everyday things from poisoning you by its false sense of security or unavoidable temptation. Maybe it would be different here if the townsfolk weren’t pagans attending church under the auspices of being saved only to spit out their communion wafers and use them to “bless” their bullets for a good hunt afterwards. So while the marketing materials conjure visions of The Witch and its supernatural entities writhing around in period filth, November hews closer to Hard to Be a God and its genre-bending chaos. We get devils smashing mud into the faces of those seeking help, witches handing out recipes for love potions containing armpit hair and feces, and a woman rendering the local priest dumb as penance for his discovering her theft of his sacred gold. It’s a dog-eat-dog world wherein the just are as deceitful as the damned. Happiness becomes a dream saddled with a cost that should be too steep to pay but seemingly never is. And considering the Baron who watches his wealth stolen also took this land from Estonia, there’s no one to pity.

We therefore watch to see how things pan out, discovering more and more horrors along the way. Characters are asked to kill others for their own happiness. Some admit to killing in the past only to be forgiven as though the victim would have done the same. Nothing is sacred, everything a means to an end. And those who have something to offer (a kratt made of snow with knowledge of lovers from millennia spent as river water and rain) or are at least strong enough to acknowledge love is too pure to take by malicious means (Liina’s internal conflict between having Hans to herself or allowing him to be happy) suffer the worst. Rather than teach a morality lesson, Sarnet’s film shows us how deception earns results.

And it’s not as though their suffering comes via abuse or death. On the contrary, we learn life is the most effective punishment compassion and hope can face. As everyone holds his/her salvation forfeit in order to enjoy the fleeting gratification their dreams aspire to possess, they become lost. One by one people disappear in part or as a whole, gone forever or left as a shell of the human they might have become. They found pleasure if only for a second before finding themselves prisoners to the darkness they ignored while those like Liina remain to feel the panged regret of missed opportunity rather than the joy of doing the right thing. Purity may let you keep breathing, but conscience will eat you alive with each inhale. Maybe the majority onscreen doesn’t hold their life forfeit after all. Maybe they’re the ones who understand its true worth and thus leverage it for something they crave — no matter how material or transparent. Would you rather live mired in tragedy or die directly after experiencing bliss? Would you struggle to make ends meet, appeasing the dead in white with offerings that cannot be compensated for or would you pay the ultimate price to those in black for a half-baked employee to ease the burden? This world is literally the Devil’s playground, its inhabitants embodying entitlement despite many having nothing but their name. As a snowman speaks of romance in death we fear a Romeo and Juliet end. But instead of bittersweet, such a climax here tastes sour.

And that is intentional. Sarnet orchestrates authentic horror through a supernatural filter wherein beautiful black and white cinematography can immortalize abject despair. He gives the plague form as a milky white-skinned woman promising kisses — the false ideal manufactured to shield our view of its infidelity. He lets blood seep out from between the pages of the Bible, forcing us to understand the incongruity of asking a demon to swear its loyalty upon the sanctity of the divine. November is thus composed of numerous contrasting pieces that converge in terror, laughter, or at its best both. When we want tragedy to befall our heroine because sacrifice is safer than obsession, we have reached a point of clarity. Fairy tales don’t provide happily-ever-after. They deliver evidence of our inevitable sorrow.