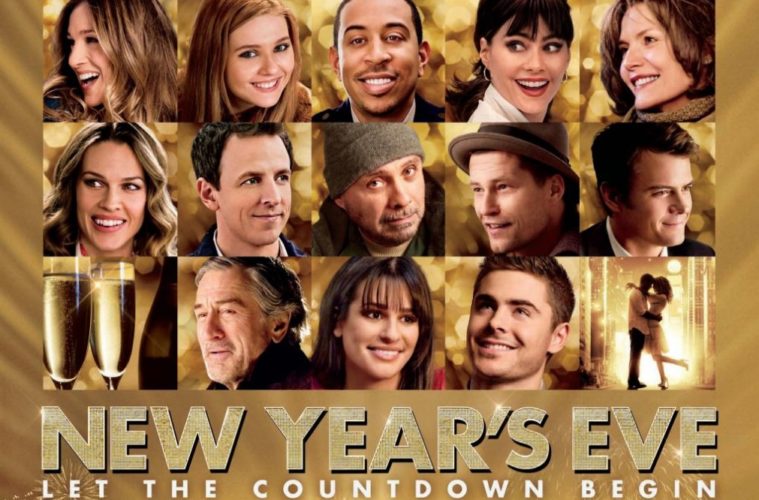 So many questions I never knew I had were answered last night during a packed house screening of New Year’s Eve. A spiritual sequel to last year’s Valentine’s Day, director Garry Marshall, writer Katherine Fugate, and at least three actors playing different characters return. Besides learning the general masses savor broad-stroked comedy when it’s spoon-fed to them, I also discovered trite generic love to be their fantasy dream-come-true of choice. I guess I shouldn’t have been surprised since this film received the greenlight despite its dismal predecessor wowing in its mediocrity.

But not all is lost. So many mysteries are uncovered during the course of the film. For instance, did you know Alyssa Milano still acted? Neither did I. That’s not to say she acts much here in a total of two minutes of screen time, but she does still have an agent. What about Zac Efron becoming a charismatic actor without the need of singing to fall back on? Can I say best part of this film? Yes, I can. Oh, and how many of you had pools going to guess when Abigail Breslin would turn from precocious little sweetheart to gawky, obnoxious teen? Well, the polls are in—please collect your winnings.

Is it sad that these were the thoughts rifling through my brain during the movie? There really isn’t much more to grab hold of when you know everything will eventually be tied up in a beautifully ornate and vapid bow. Its interwoven plots are so obviously connected that Fugate uses our intelligence against us. There are so many red herrings deflecting the happily ever afters we know are coming that any shred of excitement I had was rendered moot. Who is Sam’s (Josh Duhamel) nameless date one year in the making? Who is Nurse Aimee’s (Halle Berry) possible New Year’s smooch? Who is Kim (Sarah Jessica Parker) making that dress for? What meeting is so important to Claire (Hilary Swank) that her confidant Brendan (Chris ‘Ludacris’ Bridges) continuously reminds her? Could all these mysteries be one and the same?

There is so much going on that the revelations of relationship connections—be they familial or romantic—lose all import. We want to know who Stan Harris (Robert De Niro) regrets pushing away on his deathbed; we need Parker’s tale of parental responsibility with Breslin’s Hailey to connect with someone else to make it more than a one-off Times Square adventure; and because the most clichéd segment of all—two pregnant couples vying to have the first New Year’s baby (Jessica Biel/Seth Meyers and Sarah Paulson/Til Schweiger)—has no ties to anything else, it becomes less important as a result. The filmmakers go through so much trouble to intertwine everything that the strays appear tacked on and worth much less of my time. Would the film be better if you remove a third of its litany of characters? Perhaps. The few stories that actually work do so because of their brevity—none of the characters on display beg for more screen time. It is two-hours, so maybe cutting characters means cutting time. Get rid of Yeardley Smith’s uncharismatic pawn to drag out Duhamel’s story. Say goodbye to Cherry Jones’ emotional heartstring tug or Sofia Vergara and Russell Peters’ over-the-top ethnic stereotypes. Do more with less. It seems a simple concept yet it’s never actually put in practice. Ashton Kutcher and Lea Michele’s quiet courting works because of its side plot status; Katherine Heigl and Jon Bon Jovi’s over-wrought first world problems work because they are both selfish and the film doesn’t waste time trying to portray them as anything but.

It’s tough to say who should come and who should go, however, when so many of the brightest spots come from small cameos interjected into the journeys of others. Larry Miller is hilarious, Hector Elizondo shines with an unexpected accent and lovable demeanor, John Lithgow brings his trademarked over-exaggerated line readings, and Common stops by for a moment of true thankfulness despite being the most contrived stretch without any set-up of them all. They succeed where others fail—see Matthew Broderick, Cary Elwes, and James Belushi—but it’s a crapshoot as to which would hit. Even the more worthless cogs have their moments when drunk men pass out in Parker’s lap, a security guard willingly slings Swank over his shoulder, and Meyers versus Schweiger gets heated.

Thankfully—and probably most surprisingly—one thread does shine above the rest. Revolved around the Ahern Records New Year’s Party that about eighty percent of the film orbits, former employee Ingrid (Michelle Pfeiffer) hires Efron’s bike courier Paul for the night to make her resolution list come true. If he is able to think out of the box enough to give her a trip to Bali and a walk through all four boroughs of NYC, he receives the four party tickets she stole from her boss. Schmaltzy and unbelievably clichéd, this is still the most magical segment. It’s not about sex or love; it’s about being the person you’ve always wanted to be but never had the guts to achieve. Pfeiffer’s meekness is transformed into confidence as Efron’s libido is replaced by a sense of compassion and desire to help the one person who needs it most.

Overly sentimental and completely unbelievable, Efron and Pfeiffer hit their marks perfectly and never believe the film they’re in deserves more. Their escapades are funny, heart-warming, and always a joy when onscreen amidst the other tales of unrequited love and hopeful connections. New Year’s Eve shoots to entertain the masses with paperback romance, so to find one redeemable piece is refreshing. Would I ever recommend the film as something that needs to be seen though? No, I wouldn’t want to feel guilty for stealing two-hours of my readers’ lives away. However, if you must out of sheer morbid curiosity, definitely stay for the end credits. A mix of outtakes with a great Valentine’s Day bit, the belly laughs finally arrive.