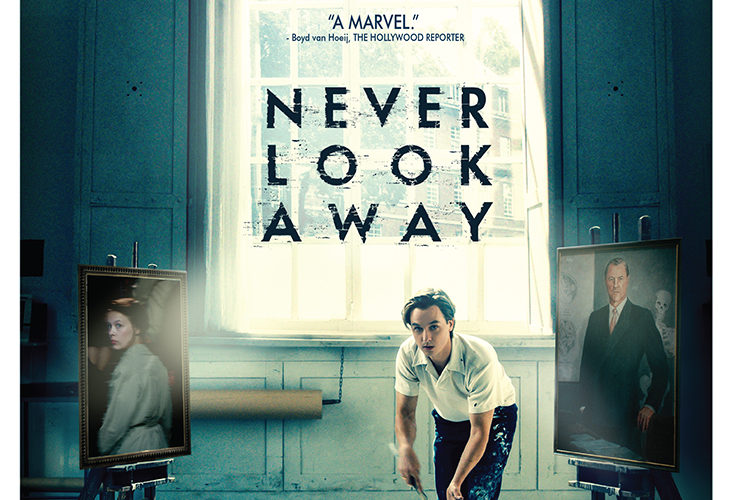 Review: ‘Never Look Away’ is a Novelistic Return to Form for Florian Henckel von Donnersmarck

One of the biggest challenges when making a film about a fictitious artist must be coming up with art that doesn’t make audience members question the admiration for the artist. In that sense, writer/director Florian Henckel von Donnersmarck covers his bases by using Gerhard Richter’s photorealistic pieces as the inspiration for the work created by Kurt Barnert (Tom Schilling), the protagonist of Never Look Away. So by the time a frustrated Kurt realizes he can turn painful memories into haunting paintings that see beyond the “reality” of a photograph, we are so immersed in his story that unexpected chills are the only possible reaction we can have upon seeing his first completed piece.

The other challenge of a quasi-biopic must certainly be writing a backstory plotty enough to feel novelistic, but subtle enough to feel as random and unplanned as real life, so that the more cynical viewers won’t turn to their companions and go, “This can only happen in the movies.” That von Donnersmarck also achieves this through his impeccable screenplay–in a three-hour-long movie–is somewhat of a miracle.

Judging only by the synopsis one might imagine a tedious melodrama with nothing new to offer, but Never Look Away is a film that restores our sense of wonder, if not making us feel like we’re experiencing it for the first time. Von Donnersmarck puts classic film techniques to use in refreshing ways that recall both “comfort food” types of films, and modern German dramas that continue to explore the dark legacy of the Holocaust.

The memories that keep haunting Kurt, looking for an outlet to escape his unconscious, all stem from traumatic events he went through during WWII. The most significant of all perhaps being the death of his favorite aunt, Elisabeth (Saskia Rosendahl), who was taken away from their home by Nazi doctors when she started showing signs of mental disorders. Following the Third Reich’s credo of perfecting the Aryan race, doctor Carl Seeband (Sebastian Koch), a eugenics-obsessed mad scientist, decides that Elisabeth is “undesirable” and marks a fateful red cross in her paperwork–a terrifying visual cue that we will see reflected onscreen again when Kurt splashes red paint across a canvas trying to figure out how to exorcize his demons.

Even though the memory of Elisabeth becomes more and more distant, Kurt remembers his aunt’s advice to “never look away,” because there is beauty in everything truthful. It also helps that in his 20s, as an arts student in East Germany, he falls in love with a young fashion student who shares his beloved aunt’s name. To avoid any incestuous feelings, he calls his girlfriend Ellie (Paula Beer), unaware that he actually is tied to her family in unexpected ways.

With every scene providing the same underrated pleasure of turning the page on an addictive novel, von Donnersmarck infuses Never Look Away with the same energy he did his debut, the brilliant The Lives of Others, which dealt with another dark period of German history. While in that drama there is a pervasive feeling of hopelessness and powerlessness, in Never Look Away he presents a different side of the coin as he meditates on the restorative power of art (which he executes in a much less corny way than it sounds). The films’ connection is perhaps best represented by Koch’s casting: in Lives he was the victim, in this one he’s the victimizer.

Shot in warm, romantic tones by Caleb Deschanel, Never Look Away is also a showcase for the remarkable Schilling whose boy-next-door handsomeness and quiet fury can recall a less manic James Dean. Schilling allows the director to sometimes turn him into the canvas on which he will project the film’s themes, and other times he seems to take hold of the work himself, one gets the sensation of a sculpture coming to life to the surprise of its creator who is elated to see his work transcend expectations.

In the same way, the film itself appears to constantly shapeshift in front of our eyes. Von Donnersmarck has created the rare kind of work that’s as slippery as a hand-caught-fish, and as reassuring as standing in front of your favorite work of art in a museum.

Never Look Away is now in limited release and expands in late January.