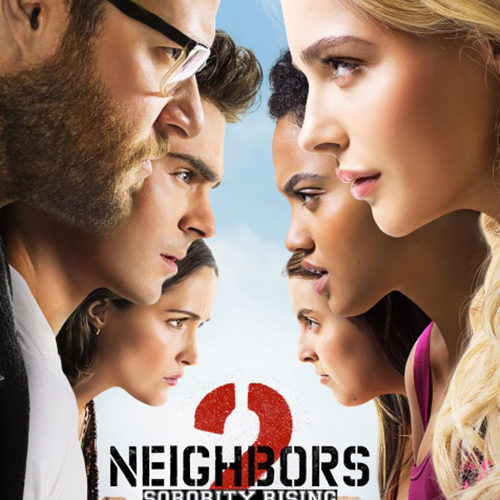 Originally released during a wave of enjoyable-but-disposable raunchy comedies, the first Neighbors was a trojan horse. Underneath a gleeful prank war arms race, it presented a radically non-judgmental and empathetically flawed version of modern adulthood. Unlike so many comedies of the past decade, Neighbors refused to demonize its characters as arrested adolescents, even when they didn’t fit into traditional parent roles. It felt unusually insightful, finding exaggerated comedy through the perspectives of both college kids moving into adulthood and fledgling adults figuring out parenthood, one mistake at a time.

But even in its best moments, Neighbors carried an unwanted whiff of testosterone — a hyperactive frat culture that was softened and still felt out of touch with the unabashed exuberance of the movie. Neighbors 2: Sorority Rising corrects that problem so thoroughly that it not only improves on the original; it also becomes one of the most progressive mainstream movies of the last decade. Analogous to last year’s breathtakingly joyful Magic Mike XXL, Neighbors 2 is a celebration of feminist individuality — a parade of women who challenge every convention of the genre (and society) by lifting up instead of punching down.

Neighbors 2 picks up right where the adult growing pains of the first installment left off, with Mac (Seth Rogen) and Kelly (perpetual MVP Rose Byrne) trying their best to raise their daughter while also running into the many pitfalls of balancing work, a social life, and a child. In escrow on their house, their life is further complicated when three freshmen (Chloë Grace Moretz, Kiersey Clemons, and Beanie Feldstein), refusing to play by the Greek System’s patriarchal rules, decide to start a rogue sorority next door. It’s only a matter of time before Mac and Kelly prepare to go to war with the girls, who host nightly blown-out house parties.

From the ground up, Neighbors 2’s script is built with an eye toward upending the sexist assumptions of the Greek System and college-aged women. From the first scene, Shelby (Moretz), Beth (Clemons, a breakout from last year’s deceptively forward-thinking Dope), and Nora (Feldstein) are dismantling the expectations of college parties. After leaving the neon-glow seediness of a frat party, one of the girls remarks, “I felt genuinely unsafe in there,” lifting a middle finger at years of college movies, including Neighbors, where young women were supposed to be excited about becoming attractions.

Moretz has previously shown her abilities as a sneakily charismatic presence, and Feldstein may be the real surprise among these three leads. She initially seems to draw from the Rebel Wilson mode with her “devil may care” physical acting style — but, unlike Wilson, she isn’t a performer who sounds like she’s heading off jokes about weight or sexuality. She’s just entirely free.

In nearly every scene, there’s a consistency to this three-dimensional femininity, whether it’s a dance scene set to Big Freedia that plays with sex appeal until souring on a hilariously truthful moment about men, or a sequence where women dressed in hoodies and dresses throw off their high heels in a corner and dance triumphantly together as a symbol of broken-down gender distinctions.

And it’s not only the ladies who are living in this enlightened time. There are also the returning men of Delta Psi Beta. Seen here is an embrace of bro-dom not as one-upmanship, but as distillation of brotherhood as overwhelming sensitivity and positivity. Over and over, the movie sets up scenes that so easily could slide into “no homo” irony, yet delivers them with sincere emotion. And that sense of self-reflection is equally present in the interactions with the women as Teddy (Zac Efron) is repeatedly put into situations where he realizes the sexism of his ingrained beliefs.

Efron, in general, continues to be a comedic delight, commodifying his body as an aphrodisiac without ever losing sight of the character or the absurdity of his own ego. But he’s also able to bring resonance to a potentially thin character, undergirding his scheming with an underpinning belief that people won’t want to be around him if he’s not an agent of chaos. It’s a testament to the tonal fluidity that these scenes can feel so genuine and be followed-up with pieces of insanely stupid physical comedy. Neighbors 2 thrives because of its infusion of strong young women; it’s also key that they’re new to this. Where Teddy, Pete (Dave Franco), and the pathologically tenacious brothers of Delta Psi Beta went overboard in the first movie to the point of being cartoony, the sequel finds a delicate balance between articulating the girls’ inexperience with independence and their fiery sense of self without ever undermining them.

Directed again by Nicholas Stoller, Neighbors 2 isn’t going to be raised up for its visual language, but the sequel does quite a bit to match the movie’s sense of pitter-patter dialogue with equal visual energy. One particularly funny visual gag finds a creative way to play with a winding text message conversation on both sides of the frame, while a chase through a tailgating parking lot is interspersed with some effective use of handheld camera work.

Even as it pushes into the cozy familiarity of slow-motion party montage, Neighbors 2 can’t help but feel refreshingly new in its vision of the college movie as something unashamed, vibrant, and urgent. And by the time it ties together each of the storylines with impressive grace, it’s managed to create a memorable movie about both the budding college life and future empty-nesters.

Neighbors 2: Sorority Rising will hits theaters nationwide on Friday, May 20.