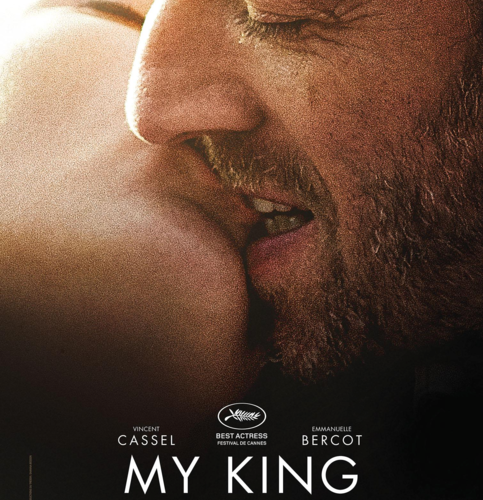 The central relationship in Maïwenn’s latest film, My King (Mon Roi), is familiar to anyone who knows a couple that seems perfect from the outside. Georgio (Vincent Cassel) and Tony (Emmanuelle Bercot) are the type of people whose interactions are enveloped in such a thick euphoria that the outside world may as well not exist. But this isn’t a grand romance, and that facade is just a narrative method to explore the arc of a dissipating relationship as it moves from whirlwind hook-ups to pregnancies and belated personal revelations.

Maiwenn begins the film near the end as Tony is recuperating in a seaside rehabilitation clinic after a major skiing accident and reminiscing about the emotional devastation of her relationship with her ex-husband, Georgio. In one of a few moments of blunt visual symbolism, she’s injured her knee — a joint that only allows backward flexibility. But while Maïwenn’s choice to juxtapose physical and emotional rehabilitation is a misstep, it allows the film some future clarity about its tragic leanings.

A figure of fierce spontaneity and burning passion, Cassel’s Georgio is suitably introduced in a club against the nocturnal throb of Son Lux’s “Easy.” He’s a handsome man who’s immediately familiar from across the room to Tony as a regular from a bartending job done years earlier. Georgio is fuzzier about this connection, but Tony and Georgio nonetheless fall into a romantic trance as they flirt and flit over a morning cap at his apartment.

He’s the type of smooth operator who whisks Tony away into friends’ weddings on second dates, and exudes a forceful but effortless humility that loops back around to domineering egoism. As he says jokingly in a moment of prescience: “I’m not a jerk — I’m the king of the jerks.” Together, they sprint through the rites of a new relationship — with Georgio announcing that he wants a baby seemingly weeks into their mutual courtship, and only surveying the realities of their surroundings when it’s far too late.

My King is insightful about this sensation of blindness, and the ways that the true, dangerous flaws don’t appear until the relationship reaches a period of twilight. But there’s also a facile tedium to the ways Georgio is revealed to be an unreliable partner. Bercot’s performance is incredible in scenes such as one where she nearly leaves her newborn in a pharmacy in a state of stressed anxiety, but her isolation also drastically changes the film’s tone.

While the first half meditates on the inconsistency of intimacy and the ways that small things (e.g. close ex-girlfriends) grow to be daggers, the second half adopts a psychological severity that makes My King feel imbalanced. As they both progress in their lives and careers, Tony can’t help but feel abandoned by her husband, whose presence is sparse, and who repeatedly gaslights her.

She’s all but helpless as Georgio rents another apartment on the block, or has to sit quietly as debt collectors come to take half the furniture from their shared apartment while she’s cradling a baby. The problem with this turn towards more noxious behavior is that the film loses its own equilibrium, and more nuanced subjects like “incompatibility as humans” become far more black-and-white. In the latter thirds, Georgio becomes such a wreck of a person that the film ceases to be about the way this seemingly perfect couple can dissipate as much as how explosively this will all end.

Maïwenn doesn’t let this implosion of the relationship overtake the film, but it’s enough to make the drama feel lost. And, to be fair, this is an ambitious piece of storytelling, following these characters over nearly a decade of their life as they build and destroy, only to lose something else vital when they try to re-build. She does eventually find a balance in highlighting the deep fragilities and the reasons why these characters were drawn to each in the first place. But the film’s structure is so rooted in its future that it’s nearly robbed of any feeling other than inevitability.

My King is now in limited release and expanding.