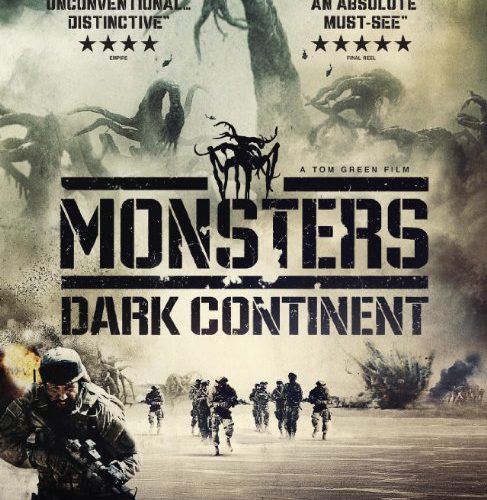 Before Gareth Edwards brought Godzilla back to life, he made his directorial debut with the 2010 indie hit Monsters. The revisionist monster movie – for which Edwards also served as writer, editor, cinematographer, and visual effects creator – follows two Americans who cross into a Mexican “infected zone” where giant alien creatures have taken residence. Now, five years later, the work has received a sequel that uses Edwards’ CGI inventions to comment none too subtly on the horrors of the Iraq War.

Directed and co-written by first-time feature director Tom Green – who penned the script with Jay Basu – Monsters: Dark Continent takes place in a Middle Eastern infected zone where U.S. troops arrive under the guise of protecting civilians from an encroaching alien threat. The story follows three young friends –Michael (Sam Keeley), Frankie (Joe Dempsie of Game of Thrones), and Shaun (Parker Sawyers) – who gladly enlist in the fight to escape their impoverished Detroit neighborhood, and satisfy their macho egos on the battlefield. When a mission to retrieve some missing soldiers results in a massacre, it’s up to Michael and his superior, the intense Sgt. Frater (Johnny Harris), to infiltrate enemy territory and find the lost men.

Whereas the first film, with its quiet, tense spectacles and thoughtful examination of xenophobia, provided an unorthodox take on the sci-fi thriller, Dark Continent prefers to go the conventional route, with larger, faster aliens, gore, and bullets aplenty. Shot with shaky cam for an extra boost of gritty authenticity, each action sequence attempts to draw the viewer into an unforgiving desert hellscape, only to fail by indulging in numerous war movie clichés (if you’re wondering, yes, a traumatized soldier does shoot his automatic rifle into the air while screaming).

The combat clamor also tunes out the titular Cthulhu-like creatures, causing them to recede so far into the background that their few moments in the spotlight feel more incidental than integral to the plot. Without their presence, the experience then becomes a ham-fisted Heart of Darkness-like descent into madness wherein, predictably, Michael discovers that the army’s involvement has only caused more death and destruction. The whole “man is the real monster” message feels especially trying as the film constantly and needlessly drives it home with scene upon scene of Frater degenerating into barbarism.

The most problematic element, however, is Michael and his crew. Early on, the men ramble around their hood, enjoying one last night of debauched activities before being deployed. While the scenes are meant to establish their brotherly bond, their repulsive antics – which range from cheering on a gruesome dog vs. alien fight to waving guns at prostitutes – make it impossible to root for them. The seemingly intentional effect paints the men, not as naive young recruits, but as thoughtless alpha males more than deserving of war’s brutal lessons. When Frankie and Shaun are killed, their ends come so swiftly, aggressively, and without pity that it feels as though the film relishes in their deaths, which adds a deeply cynical tone.

In the end, Dark Continent not only lacks originality, but the aspiration to continue its predecessor’s mission of intelligently exploring the fear of the unknown. Deprived of sympathetic characters, thrills, and Edwards’ skilled touch, the film makes for a disappointing follow-up to some impressive sci-fi cinema.

Monsters: Dark Continent is now in select theaters and on VOD.