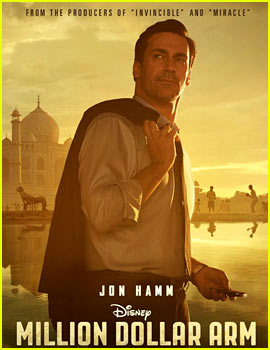 It’s likely that you’ll know well ahead of entering the theater whether or not Disney’s Million Dollar Arm is your kind of entertainment. The final product—a well-made, enjoyably predictable, by-the-numbers sports drama—is destined to reward the confidence of those all-in audience members, while drawing a few begrudging naysayers along for the ride. If you find yourself attending Arm this weekend at the behest of baseball fans or relatives looking for a family-friendly outing, don’t worry much. Thanks to the likes of star Jon Hamm, writer Thomas McCarthy and director Craig Gillespie, this underdog story might actually provoke some cheers, even as you try to resist.

Hamm is the movie’s star attraction, playing real-life sports agent J.B. Bernstein, who’s floundering in his high-profile livelihood because more established agencies keep poaching the athletes he’s trying to court. With a little inspiration from his business partner Aash (Asif Maandvi) who goads him to watch an Indian cricket game, and Susan Boyle, yes the one who sang “I Dreamed a Dream’ on Britan’s Got Talent”, J.B. stumbles onto a potential new market. He’ll travel to India with a scout, hold auditions in Mumbai, and enroll two Indian cricket players in a reality tv contest called the Million Dollar Arm. The goal of this scheme is to take two athletes who know nothing about how to play the sport, and turn them into professional ball players within the space of a year.

The film’s first act heads off to Mumbai, and immerses the film in the color and vibrancy of the culture, while mining laughs from crusty scout Ray (Alan Arkin) who spends most of his time cat-napping through disappointing auditions and waging a losing intestinal battle with the local cuisine. Hamm sketches J.B. in these early chapters as something of a hustler; an earnest one with whom we sympathize with due to his straight-forward demeanor, but a hustler nonetheless. After a energetic montage—focusing on those missed targets and just-too-low pitch speeds—J.B. finds what he came for; two champions, ready for America and the training camp of Tom House (Bill Paxton). Rinku (Suraj Sharma), the first place winner, is a javelin thrower who specializes in an aerobic pose worthy of the Karate Kid before each pitch, while runner-up Dinesh (Madhur Mittal) is a force of speed who needs more accuracy. Both men are leaving behind poverty and the love of their families for a one-time shot at success in America.

The first half of the film zips along down a charming but obvious path, but the second comes head-to-head with its own formula and finds a few surprises. There could stand to be more of Dinesh and Rinku, who are played with sincerity and yearning by Mitall and Sharma, and it’s a bit nonsensical that J.B.’s career drive and wavering moral compass take priority over these young men facing an impossible task—learn baseball from scratch in a ridiculously limited timeframe–  that’s been thrust on them thanks to J.B’s scheming.

Yes, we see early where all of this is headed, and if you expect J.B. to be that same accidental heel by the end of the film, then you haven’t seen too many Disney pictures. What shines through though, is the tempered, compassionate script by McCarthy, that doesn’t shy away from the nuances of J.B’s neglect and self absorption and personalizes the desire and drive of Dinesh and Rinku. But it’s ultimately the performances, and Gillespie’s smooth, assured direction that brings the film around all the bases. Hamm gives J.B. an edge and a human frailty that wouldn’t feel as authentic if it were being worn by most other leading men. At the same time his eyes are glinting with a new plan or angle, there’s a forlorn resignation on Hamm’s face that hints at something deeper down, something sort of lost. This goes a long way to making the character more interesting than his obvious trajectory. Of course, there’s a woman who comes to this hapless cad’s aid, and the casting of Lake Bell is inspired.  She projects such a natural energy in her scenes with Hamm that they distract from the character’s one-note purpose; together their chemistry overcomes dopey scenes like a forced date set to Indian kitsch contrived by J.B’s charges. As good as Sharma and Mittal are, they are trumped by Bollywood actor Pitobash, who plays a spirited baseball fan that comes along to America to play interpreter and, eventually, assistant coach to a sublimely patient and laidback Bill Paxton. Arkin is the grumpy oldster, but he never fails to play parts like this to their grizzled hilt.

The game show premise of Bernstein’s Million Dollar Arm is clearly a business proposition that cares more about exploiting an untapped market than the lives of the people it purportedly values. At first glance, Gillespie’s film looks to do the same, but everyone involved here has their heart and talent in the right place, and this film is just about as good as it was probably ever going to be. It celebrates and values the game, and even manages a few unique and stirring scenes, like the one where Pitobash’s Amitt is tasked with a third-act rousing speech and instead speaks from his heart. I could call all the game plays, saw all the pitches coming a mile away, and by that last, tension-filled audition, I too was cheering from the stands.