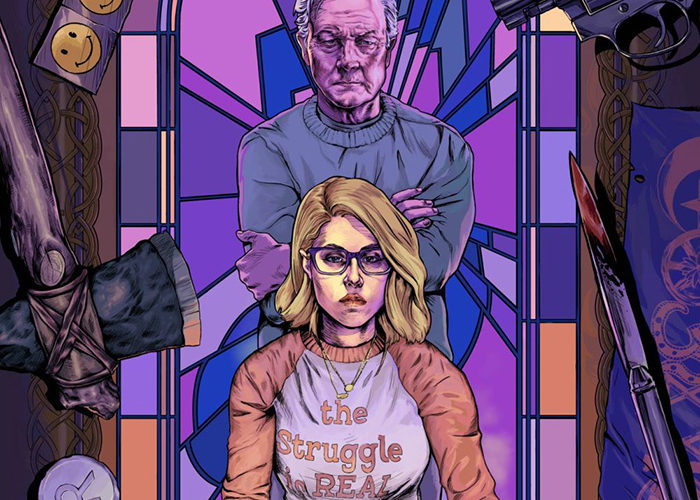 The kids just aren’t the same anymore and it’s slowly making Harvey (Robert Patrick) go insane. His son (Ronnie Gene Blevins’ David) thinks it’s dementia and wants to put him in an assisted living institute, but that’s merely another example of America’s youth forgetting their responsibilities. In his day family took care of itself. When Harvey’s wife died, he did everything to give his son a good life. And this is his reward? Abandonment? He’s sacrificed blood, sweat, tears, and time and now he’s done watching the world devolve around him as though it was all for naught. If Harvey’s to be dismissed by society as a dinosaur longing for a past where “men were men and women knew it,” he’s going to go out banging that drum.

That leads us to Olive (Amanda Crew)—one of those Millennials that sticks in Harvey’s craw as an independent woman unafraid to stand up to the patriarchy (who got dumped and fired on the same day for the trouble). Heeding the advice of an empowered friend (Hayley Marie Norman’s Lenore) and commune-loving mother (Kim Delaney’s Crystal), she begrudgingly decides to leave the city and hoof it towards a more rural area for some rest and relaxation. Harvey’s large estate is still available for rent on short notice and she takes it. Olive sees him as a creepy yet harmless old-timer turning a profit and he sees her as the epitome of everything he hates about society’s gradual shift to gender equality. Both also see the other as an escape. While Olive is our default protagonist and Harvey our antagonist, writer/director Richard Bates Jr. lets the title of his film find meaning with each. To her Tone-Deaf alludes to the fact that she’s exactly that: tone-deaf. Despite playing the piano from a very young age, she’s truly horrible. And being that Bates Jr. is unabashedly wielding stereotypes from the Millennials versus Baby Boomers civil war that America currently wages at Thanksgiving tables across the country, he makes it so nobody has ever told her. This delusion of talent is therefore her participation trophy—a concept Harvey can’t bear considering how he earned every accolade he received. That mindset then renders him tone-deaf to the current social and cultural climate en route to becoming an archaic albatross standing in progress’ way.

It’s men like him who refuse to die and acknowledge how they’ve destroyed the earth that Olive cannot stand, so using that which he built from selfish spoils to cleanse her mind and spirit is a comforting thought. And it’s women like her who flaunt their feminist signs at protest marches on social media that Harvey would like to teach a lesson in the form of “real” sacrifice. Because if overpopulation really is a problem affecting our climate and future as a species, maybe these Millennial freeloaders will give themselves up for the greater good. He’s more than willing to act as a reaper with tomahawk in-hand, the sensation of taking another human’s life proving the final pleasure he’d like to experience before going to his grave. With that set-up, two very game actors in Crew and Patrick hamming it up for the audience (fourth wall breaking soliloquies abound), and Bates Jr.’s intentionally over-the-top tone (the final confrontation has them lobbing barbs and empathizing with one another’s hardships in between acts of bloodletting), Tone-Deaf looks to be a rollicking good time. While it is that when stripped of the excess a peripheral cast ruled by convenience provides, those moments where Olive and Harvey can play witting and unwitting cat-and-mouse games of politically charged catharsis are few and far between. Instead we get thrown into random sequences of unexplained nightmare (Harvey in a white room with blue people threatening him via today’s unapologetic sexuality) and comic relief (Keisha Castle-Hughes and her drug-dealing car wash).

There’s simply too much happening with little to no purpose besides distraction from the task-at-hand to fill out the run-time. Where some characters have utility (Tate Ellington as a means to reveal that Harvey acts with warped principles rather than strict psychosis), most are here to deflect, disorient, and die. It doesn’t help either that a desire to mirror Olive and Harvey’s legitimately tragic pasts as much as contrast their vastly different ideologies born from the resulting pain rings hollow. How her father (Ray Wise) and his wife passed becomes a thin veneer to some of their choices, but really just lets Bates Jr. have fun merging horror tropes with comedic sketch humor. Their psychology is relentlessly teased as important and yet we barely scratch its surface. That promise kept me invested and therefore left me disappointed when it wasn’t fulfilled. Soon I found myself unable to avoid noticing incongruities born from the conflicting ambitions of saying something and entertaining. Case and point: Crystal’s boy-toy Uriah (Johnny Pemberton). The script loves to make fun of him for being a “softboy” and yet never recognizes how treating him that way feeds into Harvey’s outlook that the “new” man is worthless. A moment arrives for Uriah to play the hero, but it’s played for laughs and feeds Harvey’s philosophy. Thankfully there’s something to be said about this proving women don’t need men (“they’re a dime a dozen”) when macho and sensitive alike are exposed as misogynists, but a quick laugh shouldn’t risk compromising the central narrative’s integrity.

David provides a nice counterbalance with a worthwhile payoff as far as his strained relationship with Dad, but it arrives as a throwaway ending for a character otherwise used as a potential threat turned benevolent bystander. That he and Uriah have substantial enough roles to mention only shows how often we get diverted from Olive’s journey. While she should be our main focus alongside Harvey, it’s not long before she becomes an afterthought as the object of men’s desire (sexual and violent) or the object of women’s improvement (Lenore as cheerleading fixer and Crystal selfishly seeking reconciliation). That we’re given a woman lead serving as the symbol for a generation only to watch her autonomy evaporate before becoming everyone else’s prop is the most tone-deaf revelation of all.