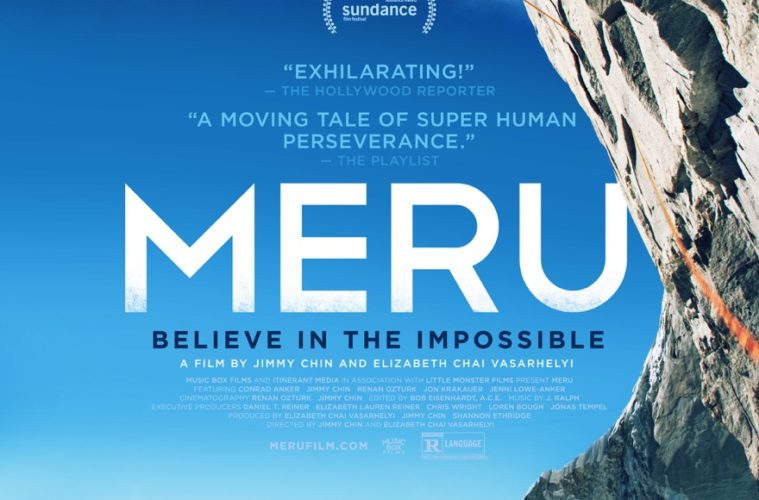 The endurance of the human body and the unceasing determination to reach untouched heights are age-old elements of both Hollywood fiction and storytelling in general. When pushing one’s mental and physical capabilities to the extreme, will the reward be worth it? Part awe-inspiring nature documentary, part personal reflective journey, Meru gives equal weight to both of these sides of the coin, despite an unfortunately narrow lens when it comes to the latter. But its tremendous, vertigo-inducing photography makes easy to understand what gives life-long climbers a thirst for what’s universally considered unattainable.

Co-directed by Jimmy Chin (one of the main three climbers featured, here alongside mentor Conrad Anker and Renan Ozturk) and his wife, Elizabeth Chai Vasarhelyi, the documentary primarily consists of three sections. In 2008, we find the climbers attempting to conquer the 20,700-foot peak of Shark’s Fin, a dangerous climb in Northern India’s Meru. As their trip is extended nearly three times its length thanks to a nasty storm, they were forced to turn around a mere 100 meters before reaching the top. After an unfocused second act devoted to some major pitfalls and significant revelations, we find the trio returning to conquer the mountain again three years later. Expert climber Jon Krakauer (whose book Into Thin Air depicts the real-life events Baltasar Kormákur will capture in this fall’s Everest) joins those personally involved to provide talking-head commentary, all attesting to the death-defying stakes accompanying these witnessed climbs. With objectivity impossible, given Chin’s on-the-ground, intimate experience of the events, the overriding message of Meru proves to be this: taking massive (although admittedly thought-out) risks in the strive for conquering new heights is worth any pain, emotional or corporeal, endured along the way.

With utter disregard for their families — notably in one sequence, where it’s shown that a trip was booked without their partner’s knowledge after the climber in question fractured their skull months prior — Meru disappointingly can’t be bothered with taking a more significant look at the effects of having this lifestyle. A certain late reveal regarding the formation of a dedicated relationship is tossed aside like a footnote, and Chin’s supposed internal battle of whether to continue these perilous acts after a brush with death is reserved to a few utterances.

If these more personal elements were taken out, Meru would have sufficed as an enthralling, albeit lightweight look at the splendor of these locations — something akin to an IMAX documentary. But for only briefly touching on these aspects before turning a blind eye in favor of egotistical showmanship, it does a disservice to the complete story. Such reservations aside, cinematographers Chin and Ozturk do indeed capture the daunting beauty of the Himalayan through a variety of sources, including “how did they possibly pull that off?” close-range photography and helicopter shots displaying the utter scale of how far they have to reach.

Complete with fascinating details — such as roasting cheese rinds in order to have the sustenance to stay alive — and witnessing the gruesome effects on one’s phalanges after being exposed to the bitter cold, Meru is a deeply immersive journey when it comes to the actual climb. This rare point-of-view provides an experience that few other documentaries can offer, but its stringent short-sightedness is also Meru‘s downfall.