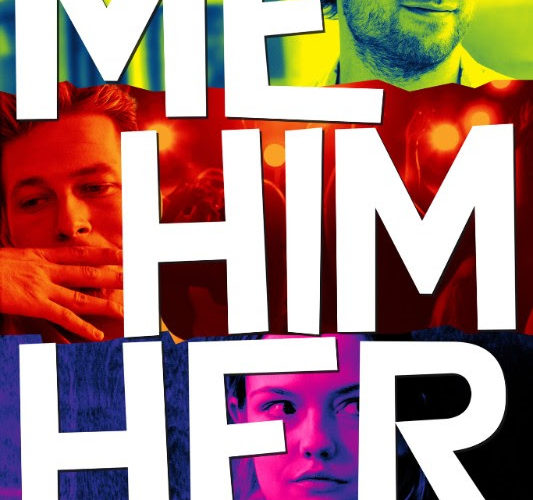 [Review] Me Him Her

You have to give Max Landis credit for trying to breathe fresh air into Hollywood tropes through his genre-merging scripts, whether you believe they’re effective or not. Chronicle‘s sci-fi, found-footage, horror thriller combo was well-received, while American Ultra‘s stoner Bourne Identity meets Mr. & Mrs. Smith was mostly reviled, although the latter’s reaction may have hinged upon people’s inability to remove his Twitter-celebrity-the-world-loves-to-hate-on from the work. His latest foray in the millennial screenwriting annals is a play on the romantic comedy that’s as much a Hollywood insider satire as it is a genre embellishment turning the homosexual as outsider trope upside down. And this time no one can blame or praise the director’s interpretation of his words. Yes, Max Landis is now Director Max Landis.

Me Him Her often times feels like a first-time director was behind the camera too. So much so that I was worried during the opening scene with best friends Corey (Dustin Milligan) and Brendan (Luke Bracey) on the phone. Not only was Corey sitting on a public toilet with so much light that it felt like a set, but Landis decided to cut between them as quickly as their rapid-fire responses came. It’s dizzying and over-the-top—Milligan’s comedic delivery akin to a guy who thinks he’s as funny as other people do and Bracey’s effeminate gestures soaring into parody. But while it all initially seems like Landis had lost his grip on the tone, it’s not long before we realize he’s intentionally going for broke with every single frame. The result is a wild ride that misses the mark as much as it hits it, but boy is it fun. More fun than it probably has a right to be — a sentiment that has popped into my head after watching all of his films. Beyond the easy jokes and absolute absurdity lies the wit and intelligence of someone who grew up in the industry and is in turn making films through that filter. He’s taking themes he’s seen countless times over and playing with them to earn laughs that hit as much upon the joke as they do the clichéd situations in which they occur. Landis embraces those contrivances and uses them to his advantage.

For instance: Brendan’s trepidation about coming out as gay isn’t to preach a story to the world about how it should accept him. Instead it’s for him to accept himself after those closest (Corey) and possibly the entire world already has. They’ve just been waiting for him to finally admit it so they can stop pretending like they didn’t know. In effect Landis is telling us the world is ready. Idiot commentators looking for social media hits through tabloid journalism will still play up the “rumor” angle (Chris Hardwick provides a manic version of this here), but very few will actually change their thoughts on the person or the work once the dust settles and the allure of controversy disappears. The question sells, not the answer. Brendan’s internal battle about whether his homosexuality will stop him from “being him” is steeped in broad comedy, but there’s an emotionally resonate center that Landis coaxes out when necessary to show his authentic, painful struggle. The comedy is merely the vehicle with which to give us thought-provoking commentary on the world’s preconceptions and identity and where they convergence now that personal matters exist in the public sector thanks to the internet’s infinite reach. The film works on this level with the “Me” and “Her” too. Corey must deal with the insecurities we all face when thinking about leaving the comfort of home for a new beginning while Gabbi (Emily Meade) seeks to admit she deserves better than the narcissist user she loves (Angela Sarafyan‘s Heather).

Their journey to these revelations is simply unorthodox and maybe borderline insensitive depending on who you are and what you’re willing to allow via satire. I personally found it hilarious when Brendan and Corey go to a gay bar wherein the former’s hotshot TV actor tries to shield his identity under a hoodie while traveling into an unbeknownst black light circus of chaos he thought was a men’s room. It’s funny when Corey pretends to be gay at a pride parade because Brendan isn’t quite ready to be himself with cameras rolling. Rather than the usual friend telling friend to “tone it down,” Corey seeks to bring it out. He knows the only reason Brendan called was to blow things up—to physically help in his rebirth. Gabbi also needs this to finally escape the clutches of her misguided heart and Corey becomes an unlikely savior and love interest considering she’s constantly labeling herself as gay rather than bisexual. This is again a subverting of the usual straight with homosexual leanings generally meant to titillate rather than provide a realistic portrayal of love spanning more than boxed-in sexual orientations. And while Corey attempts to help her and Brendan while falling over himself in physical and emotional pratfalls, he too needs them to discover the strength and confidence within to comprehend how he’s less than happy about his own current state. Landis therefore draws a trio of quarter-life crises shaken up inside his madcap universe of nonsensical insanity to sneak them underneath our guarded belief systems.

And by insanity I mean Haley Joel Osment at eleven spewing gibberish as a wild, parallel dimension version of his true self; an epic sword fight arriving out of nowhere to spawn a fantastic end credits PSA; and Sarafyan perfectly creating a vessel of pure vapidity that turns Disney villain scary on a dime. Landis and cast are probably having even more fun than we are as a result, but it’s contagious. I’m not sure another director could do that—this material is so out-there that Landis had to bring it to life. He’s literally taking us inside his mind to see the world as he does, so non-fans beware. Me Him Her is, again, derivative content with a pop culture spin that only Landis could put on it. That’s a compliment.

Me Him Her hits limited release and VOD on Friday, March 11th.