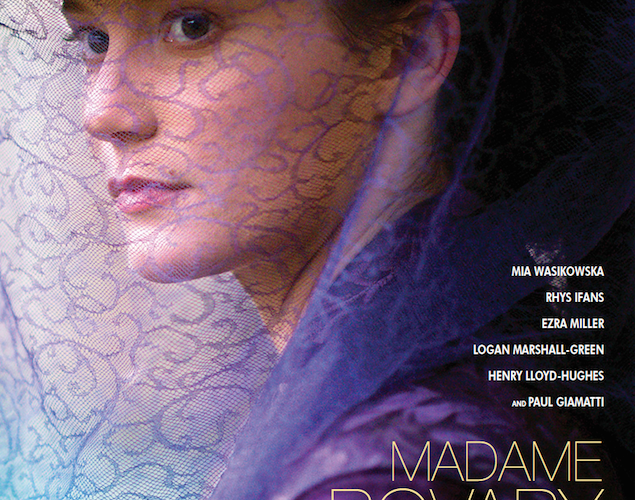 Due to their public domain status, literary classics are subject to potentially endless film adaptations. Why make an original work when you can drape a top-rate cast in extravagant costumes and bask in the romantic trappings of a bygone era? As the industry proves, people still adore these films, and they’re a surefire way to garner attention from stodgy award judges. But when are they actually necessary? What could a filmmaker do to draw audiences into a dated world that, while pleasant to look at, may not carry the emotional weight it did centuries ago? Like Vincente Minnelli and Claude Chabrol before her, director Sophie Barthes tries her hand at bringing Gustav Flaubert’s once scandalous tale to a new generation.

Mia Wasikowska steps into the role of Emma, a convent-educated farm girl married off to Charles Bovary (Henry Lloyd-Hughes), a kind, but dull country doctor. The drama takes its expected route, with Emma soon rebelling against the stifling provincial life to which she’s been cast by spending frivolously and embarking on multiple affairs, first with the indifferent nobleman, Marquis D’Andervilliers (Logan Marshall-Green), and then with the cultured law clerk, Leon (the gorgeous Ezra Miller). She then pushes her husband to perform groundbreaking surgery on a deformed patient, hoping the act will raise her social status as a respected physician’s wife. Her lofty fantasies crumble, however, when Charles becomes wise to her indiscretions, resulting in a downturn with tragic consequences.

Barthes and her cinematographer, Blue Valentine lenser Andrij Parekh, recreate Flaubert’s 19th century world by by setting the action against timeless European landscapes (the film was shot in German and Belgium, as well as the US). The environment suits Wasikowska, who previously cut her teeth on period dramas with Cary Fukunaga’s version of Jane Eyre. She settles nicely into the part, her small body overwhelmed by the ornate dresses and accessories that signify the world to which she so desperately wants to belong. In one long, magnificent take after another, the camera tracks the ill-fated heroine as she races through the woods between her lover’s grand estate and her dreary home, exhausting herself in a fruitless attempt to sustain her ruse.

Barthes also blankets the film in low light and muted colors to reflect Emma’s comfortable, but lackluster existence, which is transformed when town merchant Monsieur Lheureux (Rhys Ifans) introduces her to his fine, expensive wares. While Ifans delivers a welcome slithery take on his character – a man who makes a living off bored femmes – his fellow cast mates have a more difficult time fitting in. Barthes reunites with her Cold Souls star Paul Giamatti, whose distinctly American accent and schlubby demeanor make him a weird fit for Dr. Bovary’s jovial colleague, Monsieur Homais. The players also struggle to inject emotion into the bookish, period-specific dialogue, which often results in clunky, stilted exchanges.

While Barthes takes some creative liberties with the source material – including the elimination of Emma and Charles’ daughter – she avoids trying anything revolutionary with the text. As the familiar story unfolded, part of me wished she had experimented by focusing on Henriette, the Bovary maid played by Downton Abbey’s Laura Carmichael. As Emma’s only confidante, she’s privy to the infidelities and spending, yet she never thinks to betray her mistress’s trust. Why she stays so loyal to an unfaithful woman would indeed make for an interesting new perspective, and a more compelling story than the pretty, but tired rehashing presented here.

Madame Bovary is now in limited release and on VOD.