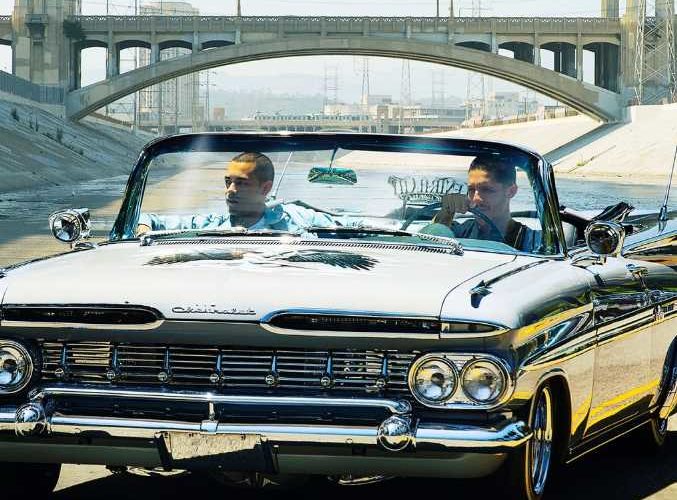 Review: ‘Lowriders’ is an Affecting Drama Set in an Automobile Subculture

Long before Dominic Toretto and his crew became globe-trotting superheroes, they might have been the neighbors of the Alvarez family, known as “low-riders” who restore gorgeous American muscle cars, including the star of their garage: father Miguel’s gorgeous 69’ Chevy Impala named Green Poison. Not unlike the Fast & Furious saga, family is at the center of Lowriders, a drama of surprisingly grounded insight from director Ricardo de Montreuil.

The story follows the coming of age of Danny (Gabriel Chavarria), a young Mexican-American teen who’d rather paint street art than murals on his father Miguel’s (Demián Bichir) lowriders. Miguel and his sons rarely see eye to eye, and complicating matters is the return of brother Francisco, aka Ghost (Theo Rossi), fresh out of jail for grand theft auto. Competing in his father’s footsteps, he steals cars to build his own dream Impala.

Ghost breaks from his father’s Coasters Car Club to lead his own crew, Motor City, who has a club house that includes tattooing, hair cuts and custom detailing — it is as if the Toretto family ran their own day spa. Motor City and Coasters go head to head in a car show where Miguel wins first place, further complicating the father-son relationships at the core of Lowriders. Danny soon falls for another artist, Lorelai (Melissa Benoist), a hipster who also happens to be a brilliant amateur art critic. She attempts to pull Danny into the gallery scene, inventing a narrative around his work with the hopes of gaining market interest.

A central theme throughout the picture is identity as Danny, born in the United Sates, identifies with his side of Los Angeles’ Sixth Street Bridge rather than with his Mexican roots. Lowriding, we learn, had its roots in Mexican street culture as Miguel provides backstory into his courtship with his first wife. His second wife Gloria (Eva Longoria) provides a rock of stability for Miguel, a recovering alcoholic who relapses when faced with all kinds of pressures.

Lowriders is a surprisingly affecting drama that provides an entry into a world rarely seen on screen, complete with “switch”-enabled cars that hop some 10 feet in the air on hydraulics. The star of the film, however, is the deep emotional core that takes art, process, and the market surrounding both more seriously than narrative cinema for the multiplex usually does. A creation of the Alvarez family ends up in a car show that’s more or a gallery opening. Ironically, Miguel resists “selling out” and in the process pushes away Lorelai, who genuinely cares for him despite inventing a narrative to help him build his “brand.”

There’s an awful lot under the hood, along with a few twists and turns as the rivalry between the Lowriders and Motor City intensifies, including a plot point which seems like an easy way to ratchet up father-son tensions and its message of redemption. A few missteps aside, including a voice-over that explains just a little too much, Lowriders is an earnest and well-acted character drama about family, conflicts, and common ground.