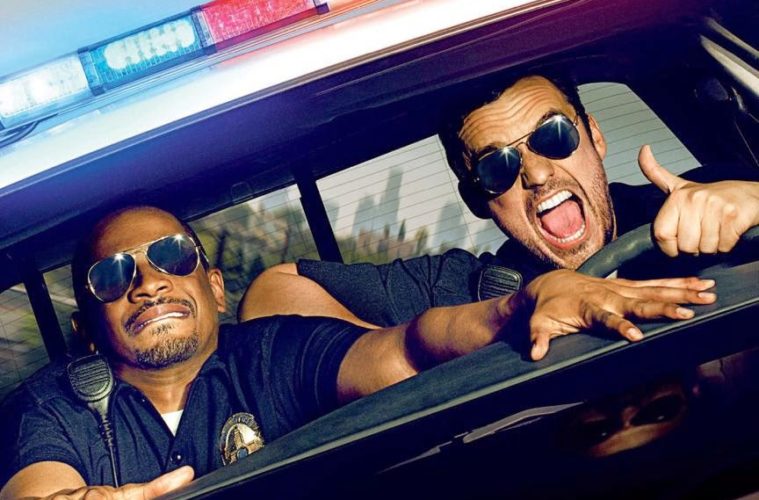 Sloppy, silly and sporadically amusing, Let’s Be Cops feels like one of those 90s comedies expanded from an SNL sketch. The core idea is ripe for comedy, but the feature narrative is soft in the middle. Think A Night at the Roxbury. Ryan (Jake Johnson) and Justin (Damon Wayans Jr.) star as two 30-somethings living and failing in L.A. Ryan’s a has-been college football star and Justin is an ignored video game designer with a pitch for a cutting-edge cop game.

For some reason Justin has police gear lying around (part of his “video game research?”), and Ryan gets the idea that the two of them dress up like cops for a party. Soon enough, the pair realize everyone thinks they really are cops, and the trouble begins. The plot is the plot you’d expect. Fake cops stumble upon real danger and in playing out their crazy-and-wild game overcome their personal doubts and fears, becoming better men in the process. You’ve got a woefully poorly written subplot involving an unbelievably beautiful young woman named Josie (Nina Dobrev), whose heart the tepid Justin is trying to win. And you’ve also got the resident dopey cop, played by the always-game Rob Riggle who mostly wasted here.

Though the narrative does have a beginning and an end, not much of the story holds together throughout. It too often feels like Johnson and Wayans Jr. throwing everything against a wall while director Luke Greenfield (who also wrote the script with Nicholas Thomas) picks up the pieces and tries to make a comedy feature out of the remains.

To be sure, when Let’s Be Cops works it is thanks to Johnson and Wayans Jr. and a very real, very impressive chemistry the two share. Both stars of the hit sit-com New Girl, these guys play off each other well enough, doing their damnedest to find humor in a script that lacks any past the set-up. Feeling long at 104 minutes, something constantly feels off, like the script being used is two drafts too early to be shot out. On a technical side, the editing is shoddy and the action lacks any kind of pop.

This would all be forgivable if there was more to laugh at. Two upcoming stars like Wayans Jr. and Johnson deserve better than this.

Let’s Be Cops is now in wide release.