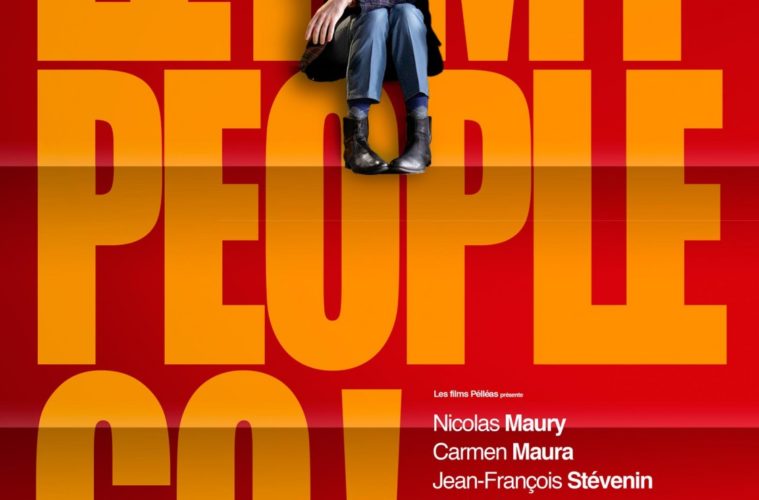 For his first feature length film, writer/director Mikael Buch has decided upon an extremely over-the-top romantic farce about a young homosexual Jewish man coming home to France from Finland after a lovers’ spat. It all plays out during Passover with a not-so-subtle aside about the holiday prayer speaking on the Exodus from Egypt and the coalescing of a people under the leadership of Moses. As Ézechiel the Rabbi (Michaël Abiteboul) says towards the end of the aptly named Let My People Go!, the Jewish religion isn’t something one can shake. It is a heritage that sticks with you whether you believe in God and the traditions or not and it always finds a way to force you into accepting you are a member. This is something Ruben (Nicolas Maury) has tried hard to forget. After all, he did move to Scandinavia on his uncle’s dry cleaning kingdom’s dime in order to study Comparative Sauna Studies in college and strictly dated goys so he never had to visit home again due to his mother’s devout Judaism. If Ruben had his way he’d never have to face the circus that is his family again. However, despite the rosy opening of utopic love with his beau Teemu (Jarkko Niemi), a regular day on his postal route turns everything sour. In a bout of physical comedy and misunderstanding, a package containing 199,980 Euros is thrust upon him by a frightened local refusing its receipt. I quickly guessed the money came from sordid dealings, but the man keels over before we can find out. Afraid of what to do, Ruben takes the cash as his own.

His refusal to phone the police about the incident, however, leads Teemu to send him packing. Dejected and scorned, Ruben leaves for France and his family members’ myriad problems. Between a mother who declares every human being gay until they find the right person of the opposite sex to continue the Jewish bloodline (Carmen Maura‘s Rachel), a father proving it’s possible to love two women at once courtesy of a recently divulged twenty-year affair (Jean-François Stévenin‘s Nathan), a sister contemplating being the family’s first divorcee (Amira Casar‘s Irène), and a temperamental brother unable to break free from being the lone enforcer of the clan (Clément Sibony‘s Samuel), it’s no wonder Ruben left. Each one selfish and quick to hand out advice, the poor guy is passed around without anyone worrying about why he’s come back. What follows is a sprawling comedy of errors where love melts, ignites, and becomes troublesome to the point of physical abuse and jail time. Ruben is exasperated throughout trying to be civil but even his one escape to a club for some cathartic dancing leads to an unlikely one-night stand with an old family friend whose actions make you wonder if Buch and cowriter Christophe Honoré are really trying to say everyone is bi-sexual. Married men and women find themselves in the arms of whoever is willing to comfort them after the loss of their spouse. Love is welcomingly shown to be unrestricted; any human being should be able to choose any other human being they’d like. Other ideas like harmless adultery and prostitution as a worthwhile career, however, skew a little too liberal.

But it’s tough to really take anything that happens in Let My People Go! without a few grains of salt. Besides the MacGuffin of the bag of cash that catalyzed Ruben’s migration home and the end of his relationship getting lost at the airport, daydreams of snowy stolen kisses and goofy memories of Irène’s rocky marriage do little to instill any drama above how they each can lead to the next joke. The casting of Maura is actually inspired since the film felt to me very similar to Pedro Almodóvar‘s earlier farcical work with her like Women on the Verge of a Nervous Breakdown. There is just this hopeful, cutesy air about everything that makes Ruben’s tantrums in frustration more worthy of a smile than an empathetic pang. It makes it hard not to simply assume a happy ending is forthcoming no matter what insanity ensues. We even keep returning to Finland to see how Teemu copes with the break-up and discovers the truth about the money to decide whether Ruben is worth chasing. The broad comedy is laid on so thick that equal amounts of people will leave the theater hurting from laughter and screaming for their money back. The humor is very much an acquired taste and admittedly not a flavor I actively seek out or find myself enjoying once its slightness dries up my giggles. When Ruben forcing his sister-in-law to trust him with the keys to Samuel’s car makes you know it’s going to get wrecked as a result, losing yourself inside the artifice becomes impossible.

That said, however, much of what occurs is instinctually funny. Sibling rivalries, over-bearing parents, and precocious kids—we can all relate. But when the script fails and details that at first seem important but end up meaningless begin to pile, all we have left to enjoy are the performances. Maura is fantastic, especially in a fantasy sequence selling a spray on TV that makes you “Jewish in a jiffy”; Jean-Luc Bideau is hilarious as Maurice Goldberg, an elderly attorney living life like a twenty-year old; and Maury truly steals the show at its center. Ruben is a fully-fledged drama queen whether he’s entitled to be one or not and Maury revels in showcasing this fact. Sadly, the vehicle he’s driving is just too much fluff for me to be completely satisfied with the whole.