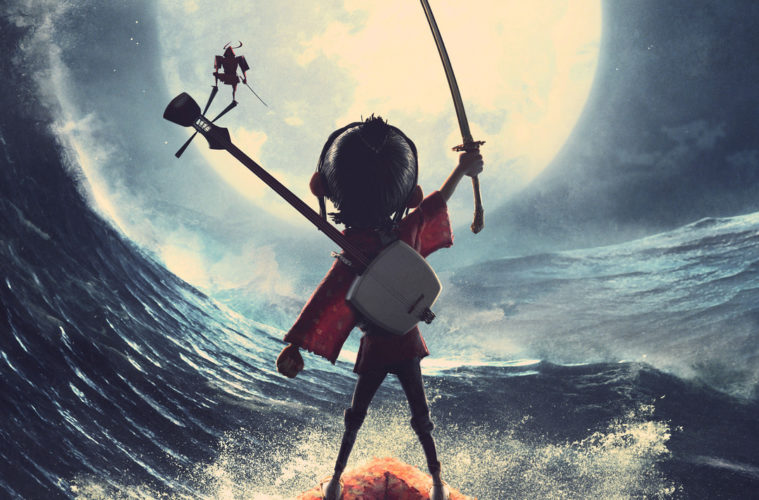 [Review] Kubo and the Two Strings

While there’s a distinct novelty to all of their work — whether it’s based on books by Neil Gaiman or Alan Snow — Laika have returned to genuinely original material with their fourth animation. This time around, the company’s CEO and lead animator on their first trio of films, Travis Knight, makes his directorial debut with Kubo and the Two Strings. Steeped in the mythology and fables of Japanese history, it’s another fantastical adventure from the studio with innovation and awe at every turn, despite a story that could benefit from having more specificity and focus.

The tale centers on Kubo (Art Parkinson), a young boy tending to his ailing mother and living near an ancient Japanese village. As the opening scene shows us, she wields magical powers that depleted in a fight and were partially transferred to her son. Years later, he spends his days earning attention and some money in the local town square by recounting a fable featuring a dazzling display of origami coming to life, and one that ultimately foreshadows his journey. Paper swirls out of his stack on the ground and forges to build creatures that battle and chickens that spit fire. There’s a playful display of wonder and tangibility to the imagery, and even though we know it’s only the beginning, it would’ve been just as entertaining to watch the entire feature play out in this form.

As is the case in every Joseph Campbell-inspired hero’s journey, Kubo is soon thrust into an adventure where he must uncover his past, forge new friendships, and do his part to help make the world a better place. “If you must blink, do it now. Pay careful attention to everything you see, no matter how unusual it may seem,” he repeats in the film. Indeed, you won’t want to miss a frame of Kubo and the Two Strings as it steps up Laika’s bar of stop-motion-CGI hybrid animation excellence. From the meticulous details (e.g. a bowl of rice being set in front of a crackling fire) to the bevy of stunning environments — including sun-kissed hills, the belly of a whale, the home of a Ray Harreyhausen-inspired giant skeleton, and a boat made out of leaves — each vista is rendered in ravishing detail, all inspired by Japanese woodblock printing.

As for the “unusual” part of Kubo’s line, the script by Marc Haimes and Chris Butler, based on a story by Shannon Tindle, is need of the imagination that’s found in each frame of the animation. Filled with platitudes about how “the end of each story is just the beginning” and the importance to tell someone’s story so they can live on, Kubo and the Two Strings has its heart in the right place — its concluding “message” of compassion and love is an imperative one — but its structure comes off rushed and nebulously detailed. Clearly inspired by the epic scope of Akira Kurosawa and dream-like vision of Hayao Miyazaki, Kubo and the Two Strings often seems to be going through the motions of its grand predecessors rather than telling its own distinct story.

A supporting turn from Matthew McConaughey as an amnesiac beetle who may or may not have been a legendary samurai war — think The Tick with more skills — provides a welcome, if occasionally misplaced dose of comic relief, while Charlize Theron as a monkey sidekick gives a dramatic balance to the ragtag trio. Ralph Fiennes and Rooney Mara‘s more villainous characters come off rather underdeveloped and one-note in their motivations, serving as mere antagonistic roadblocks for Kubo rather than playing as an essential part of the story.

Compounding fables inside fables, Kubo and the Two Strings is a visual delight from start to finish, even if it comes off all-too-familiar. Laika seemingly has all the precise tools in their illustrious belt — including a stirring score from Dario Marianelli — but hopefully next time they pay more attention to their own plot rather than the mythology of storytelling itself. As a final note, as was the case with The Boxtrolls, one will want to stay through the entire credits, and not just for Regina Spektor‘s memorable rendition of “While My Guitar Gently Weeps.”

Kubo and the Two Strings opens nationwide on Friday, August 19.