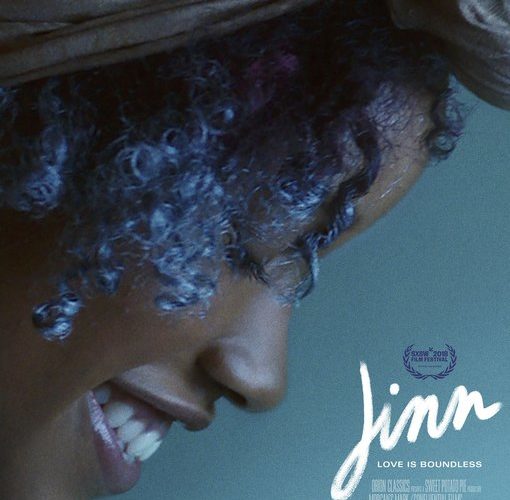 Review: ‘Jinn’ Shows the Sacrifice of Religion in the Digital Age

Religion is sacrifice. I don’t think there’s another way to truly describe what it means to give yourself to faith so completely that you’ll allow it to control your life. It’s always fascinated me that so many ascribe to a God in this way. Whether it’s tithing, hijabs, prayer, diet, etc., worshippers grab hold of the comfort and community religion provides and willingly change (or ensure not to change depending on when their faith was chosen) to earn its sense of peace. It’s a beautiful concept I’ve simply never been able to reconcile against free will — morality for morality’s sake rather than dictated as rule. And I cannot imagine embracing any religion in this day and age is easy considering how much more prevalent hate is than respect.

A film like Nijla Mu’min’s Jinn is therefore a welcome depiction of following God within our twenty-first century digital age. It shows the power of scripture to give someone balance when a chaotic life full of myriad responsibilities couldn’t as well as the more modern liberties traditionalists are willing to accept as long as a foundation of trust and honesty remain intact beneath. Mu’min does this by introducing a mother (Simone Missick’s Jade) and daughter (Zoe Renee’s Summer) to Islam. The former is a successful TV meteorologist in desperate need of something to calm the noise and violence surrounding her. She discovers purpose by attending the local masjid and strength in not allowing Islamophobia to prevent her from this new adoptive truth. She hopes Summer feels the same. As we all know, however, identity is potent. It’s one thing to see yourself as something you no longer wish to be and therefore seek a transformation like Jade. It’s another to finally be coming into your own within a volatile high school food chain only to be guided elsewhere with expectations you never agreed to fulfill. This is where Summer finds herself — a burgeoning choreographer with aspirations of art school who has gravitated towards a sexualization of movement and appearance that’s as much about fitting in as forming a personal aesthetic right when her mother begins covering her head in scarves. She sees the affect Islam has and does want to support her Mom even if on a peripheral basis, though. How bad could it be?

Suddenly the film becomes parallel journeys dictated by what these women need independent of the other. Jade sees her newfound faith as an escape, using it as a rebirth to cleanse herself of a past self she refuses to remain. Summer conversely sees it as a way to conform. She’s struggling to recognize her mother in the woman Jade’s become so following her down that path helps them to remain together. Attending the masjid could bring her closer to a boy (Kelvin Harrison Jr.’s Tahir) at school she likes too. Just as donning a hijab aligns with their identities, however, it also begins to embolden her with a sense of prideful superiority she has not earned. It appears Summer has taken up Islam for all the wrong reasons.

Mu’min then reveals the consequences, good and bad. While this new self fills Jade with confidence, it also opens a door to destruction thanks to bigotry and bottom-lines courtesy of her celebrity profile. To stay true to who she wants to be, this woman risks everything she has. And that includes her daughter — especially once the teen converts. To speak the prayer and take Allah into her heart, Summer places herself in a position with a lot more weight than she may initially presume. She wants to exist in two worlds and take the best parts of both depending on how the situation benefits her above others. This creates a volatility no one can ignore and ultimately forces her to confront who she is removed from external interference.

Here lies the title: Jinn. Rather than an angel (how she sees Tahir’s “good Muslim boy”) or human (molded from a base of clay like her mother), Summer sees herself as a smokeless flame shape-shifting into whatever suits her purposes. Despite no ill intent, suffering is an inevitable result. She may joke when saying how she hopes to “corrupt” Tahir and yet we can’t help but know there’s truth beneath the humor. This is a sort of game to her as she begins to compare and contrast what’s around her. Summer resents her mother for going so far towards religiosity and embraces Tahir’s parents (Kelly Jenrette and Damien D. Smith) as “cool” without acknowledging the different places from which they’ve come and her place in their respective lives. Summer is pretty much a consumer who’s window-shopping to see what fits while everyone does his/her best to make her feel comfortable. She is unintentionally breaking down their resolve in a way that may actually reinforce what it is about Islam they love most. She tempts them and ultimately crosses lines that prove she isn’t ready to take on the responsibility of such a complex choice. And it’s only when she pushes them to their breaking points that she sees exactly what this choice means to them. What was a pathway towards inclusion becomes exposed as a powerful backbone to life you can’t just throwaway. It’s always worse to go through the motions and make a mockery of someone’s life than to simply support them from the sidelines.

But that is what we do in youth. Summer doesn’t follow this trend with Islam alone as her social media persona, faux lesbian flirtations, and sexual façade proves. She’s gleaning lifestyle traits from those around her because she sees how they can each be wielded as a means of accruing power. What’s great about the film is its allowance for Muslims to become a part of that pool. At a time when Islam has become weaponized as a synonym for ISIS, we need glimpses at its positivity and humanity. That doesn’t mean Mu’min sanitizes things (a lot happens that could reinforce reductive stereotypes of social conservatism and familial oppression), only that she’s creating healthy representations at once relatable, laudable, and flawed. Nothing is black and white.