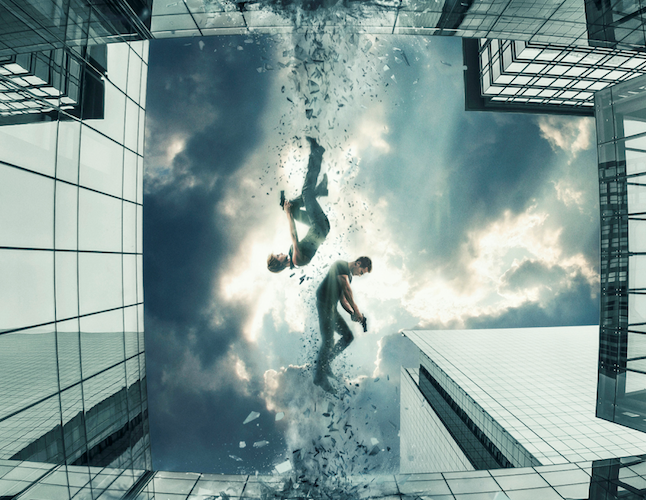 What’s left in the dystopia for audiences to discover? After The Hunger Games rejuvenated interest in a world broken at its very social foundations, turning on cruel, clandestine power structures, several other franchises ran after. Now, we arrive at Insurgent, the second installment of Veronica Roth’s Divergent trilogy, which has the auspicious distinction of being the closest clone to Games, complete with a talented, over-qualified and charismatic young actress leading the charge. Insurgent gives us plenty of pretty faces, nifty special effects and futuristic action aimed at stirring the pot of teen angst, but it hits a wall when it tries to explore the ideas at its seething heart.

I must confess that the first film in this saga (the now typical four films culled from only three books) left me mostly cold. The post-apocalyptic but socially reorganized Chicago of the future that featured prominently in Divergent didn’t make much sense, even by the typical standards of pseudo-allegorical fantasias. Shailene Woodley, a bright and sure-footed onscreen presence, stole the show as Tris Prior, an unassuming member of one of the five fractured factions that made up Roth’s world. She was coined ‘divergent’ there, and deemed dangerous because of her ability to fit into any faction of her choosing. It’s easy to see how the idea of the Divergent franchise appeals to a teen set that constantly faces premature categorization by parents, peers and the public, but there’s a certain lacking central logic in the Factions, what it is exactly that the Erudite baddies fear, and how the divergents of the world plan to change it.

The style of the first film was a pale copy of visual ideas we’ve seen before, and even big set pieces, like the Ferris Wheel sequence, lacked energy and oomph. What I enjoyed most about Divergent was a chance to see talented and interesting actors like Woodley, Ansel Elgort, and Miles Teller play in the sandbox of a big blockbuster. I suspect, ultimately, that’s largely the reason the series has been popular thus far; its conceit is easy to grasp, and even more so than The Hunger Games, the overall effect is deeply dependent on identifying with the cast. From that perspective, Insurgent is an improvement on Divergent, because it offers us larger helpings of what worked the first time around, most prominently more emphasis on Woodley and a greater attention to special effects and world building.

I never read the rest of Roth’s trilogy, so I can’t speak for how closely the film version of Insurgent hews to its companion novel, but what works here is the decision to throw the first installments pained explanations for everything to the wind. I’m pretty sure only about forty-percent of this plot makes any kind of dramatic sense, but director Robert Schwentke keeps everything moving forward at a streamlined and sure-footed pace, which is helpful because a lot of the intended character development and psychology of the first picture have been largely abandoned. We don’t spend so much of our time questioning the peace-keeping logic of forced tribalism, or the shaky wisdom of putting all the soldiers into one coup-ready faction, or what is exactly that the villainous Jeannine (Kate Winslet) wants with Tris, or what she hopes to achieve with that mysterious Maguffin cube she’s toting around in this film. Not so surprisingly, Insurgent feels more like the video game sequel to its predecessor, only anchored to the cinematic venue by way of its gracious stars.

That we care about any of what happens here is down to Woodley, Elgort and Teller, although the latter two are placed in smarmy subordinate turncoat roles depsite having played romantic interests to this film’s lead in two other, better pictures. Woodley has been on a really interesting journey in the movies, and it’s not insignificant that her work in films like White Bird in a Blizzard, Fault in our Stars and Spectacular Now all feature performances that are both psychologically realistic and dramatically appealing in a way that Tris Prior isn’t. Still, what those movies didn’t allow for was an opportunity for the actress, who excels at appearing slight on the outside and prodigiously spirited on the inside, to tap into her inner Sigourney Weaver. And, if we’re being honest, she does it just about as well as it has been done since Weaver stepped into that mech-loader and battled the bitchy Queen at the end of Aliens.

Woodley’s Tris is all raging spirit and confused determination, and what sets her apart from Katniss Everdeen is down to the calibrated nuances that separate Woodley and Jennifer Lawrence as performers. Woodley’s Tris is more effervescent and feverish in her pitch, which is useful in a movie where so many of the elements surrounding her are humorless and somber, including somewhat leaden male lead Theo James as her love interest Four. Schwentke isn’t as good a director as the last film’s Neil Burger, but he has a more focused and direct job to do here; most of Insurgent is one long chase film, with Tris, Four, Tris’ brother Caleb (Elgort) and smart-ass Peter (Teller) on the run from Winslet’s Jeannine. Yes, the new name of totalitarian evil is Jeannine, and Winslet does what she can with a character who is mostly a one dimensional cipher, and whose motivations remain so murky as to make her seem completely incompetent as a nemesis for Tris. As mentioned before, Elgort and Teller are more interesting than most of the other characters because they are given some moving room within the story, and some mild autonomy when it comes to their actions and motivations. Mostly, Teller’s Peter is valuable because of the condescending sneer he brings to all the desolate sobriety. Performers of the caliber of Octavia Spencer (doing better dystopia in last year’s Snowpiercer), Naomi Watts (this is step-up dystopia from Tank Girl) and Daniel Dae Kim (about as logical as whatever kind of ‘topia Lost was) show up and do their thing, and then exit stage right.

As a pure piece of matinee entertainment, Insurgent achieves what it’s going after because of the buzzy, reeling pitch it builds as the actors all transform into game-style avatars ready to do battle. The virtually simulated torture that Tris must endure make up the most evocative and visually arresting portions of the film, and they, as much as Woodley’s performance, are the reason I can even marginally recommend this to anyone outside of its fan base. Crafted as a kind of sprawling urban nightmare version of classical art hellscapes, Tris’ dreamworld trials are exciting and tonally more compelling than the real-world drama. The art direction imagines those Quixotic flights of fantasy in Terry Gilliam’s Brazil by way of the gritty, technological sheen of a James Cameron. Watching Woodley hurl herself across skyscraper chasms as if she were in Resident Evil has a certain, incongruous charm. The other action scenes are also more effective and feature more curious character than what we saw in the original movie. By the time the last of them arrives, Insurgent has all but wound down its story. That’s curious, too, as there are two more movies to go and yet the ending of this one feels largely complete. It’s nice not to have a vaccuous cliffhanger, but we are hardly shaking with anticipation for the next installment.

Then again, maybe that’s just me. If you read this book and enjoyed it, you will have the joy of seeing a very good actress pay fine homage to Tris Prior. If you’re just after a few hours of uncomplicated action with some exciting visual effects, it’s hard to argue there either. After a few years of this, I might be just about done with all the givers, tributes, maze runners and divergents. Dystopia, once a term that culled imagery of worlds terrifying, alien, and hopelessly twisted, is now an endearing kind of comfort food. Insurgent doesn’t do anything to change that, and largely, it’s more of the same, even if this same is slightly more well done than what came before. I like these sorts of stories when they are told well, but maybe it’s also time to find a new way to tell them. Sitting somewhere hidden away in the basement of this beautiful, prosperous slate of blockbuster franchises is the small, bedraggled form of narrative imagination, whimpering endlessly. All who catch a glimpse are likely to eventually become Those Who Walk Away from the cineplex.