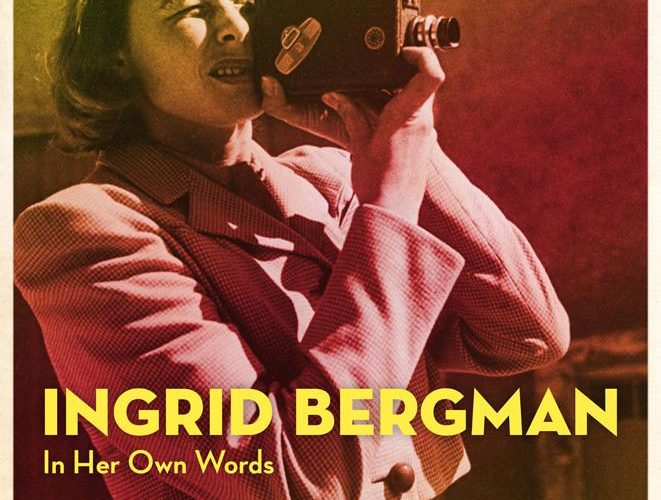 [Review] Ingrid Bergman: In Her Own Words

The first hurtle of making a documentary about any legend is to avoid being a hagiography. One of the most pervasive criticisms of reverential docs is the parade of talking heads failing to contextualize hyperbole about the person. This year saw two notable push backs against this criticism with Asif Kapadia’s warts-and-all expose Amy, and Brett Morgen’s Montage of Heck, which featured enough egregious child abuse to make even the most hardcore Nirvana fans question the cult of Kurt Cobain.

Ingrid Bergman: In Her Own Words tries a similarly blemished approach, mostly eliminating outside sources to tell seminal actress Ingrid Bergman’s story through her own personal diary entries, letters, home video, photography, and the accounts of her four children. Combining narration of the letters by Alicia Vikander with personal footage, as well as interstitials that delineate vague sections of both Bergman’s life and her own internal journey, director Stig Björkman chooses an austere and mostly invisible approach to the material.

Told in this context, In Her Own Words offers an honest and tortured view into Bergman’s pathological hunger for acting and a look at a complicated persona that eschews traditional feminine stereotypes, and occasionally, an overwhelming wanderlust.

Bjorkman does a decent job in coalescing these themes into a cohesive piece, manipulating imagery in ways that are both emotionally resonant and haunting. He particularly hones in on prose emphasizing a feeling of spiritual imprisonment (Bergman finds at least a dozen metaphors for herself as a trapped bird), and contrasting joy. In those testimonies, he finds a suitably eerie but grounded portrait of a woman who encapsulated our most mythic definitions of a movie star.

Paired with Michael Nyman’s score of seesawing strings and pillowy piano runs, the whole documentary has a lingering theatrical melancholy that infuses the home video footage with longing. It may sound like Björkman is just trading heightened imagery for talking heads, but there’s a gentle voyeurism here that feels cinematically engaging in a way that talking heads rarely do.

Despite the elegance of the presentation, Björkman is just a little too cold, content to keep the audience at arms length when the material is otherwise so magnetic. He falls into the strange limbo of having a story whose material feels abstract, but whose format feels unnecessarily rigid. The best moments find a marriage between Bergman’s existentialist language and the sensual home video footage.

Following Bergman through childhood into her meteoric rise and beyond, In Her Own Words, spends very little time on the expected greatest hits (Casablanca, for instance, is encapsulated in one charming quote describing Humphrey Bogart: “He’s interesting, not the typical glamour boy.”), instead fleshing out the full-formed contradictions that made Bergman so contentious and so beloved as an icon of femininity.

Bergman’s reputation as a mother is controversial, especially in America, where they essentially blacklisted her for extramarital affairs. In one fascinating clip, Ed Sullivan even calls for a vote to determine whether to have on Bergman as a guest on his show. In the diary entries and letters, she undeniably loves these children and feels joy in being with them, but these accounts just as often depict someone feeling suffocated by the needs of motherhood in a time where nuclear families weren’t just the norm, but an unwritten law.

Bergman’s writing is deeply effective in presenting these viewpoints. Early on, she writes, “Since I was tiny, I’ve longed for something new and different. I have seen so much, but it is never enough.” This profound feeling of emptiness gnaws at the entire movie, and this thorny internal monologue is further communicated through Björkman’s use of Bergman’s children.

Separated between Pia Lindström, Bergman’s daughter with Peter Lindström, and the three children from her marriage to Italian realist director Roberto Rossellini – – the children bring a welcome honesty, but they’re also just as likely to go into fascinating but superfluous tangents.

Pia is perhaps the most compelling, as she also has the most direct resentment toward her mother. Speaking about her mother’s decision to leave her at a young age, Pia heartbreakingly says, “I just think some people don’t find children fun.”

The Rossellini children, on the other hand, are as likely to meander about living in an Italian villa as to talk about their mother lighting up the room. There’s a visible catharsis in watching these children talk about their mother, but there is something unavoidably aesthetically awkward in mashing together their accounts and Bergman’s own views, even as it enriches Bergman as a person.

By the end, In Your Own Words has dabbed its toes into a variety of thematic discussions about image, motherhood, and the sacrifices of passion, but it all feels frustratingly gloopy. It’s a morass of individually satisfying ideas that fail to create a larger picture. For completists interested in Bergman, it gives a generous view into the longing that inspired her fame. But for everyone else, it may leave them wanting either a more conventional overview of Bergman or a more experimental arrangement of the archival footage. Sometimes the luminaries of our time speak best on their own.

Ingrid Bergman: In Her Own Words is now in limited release.