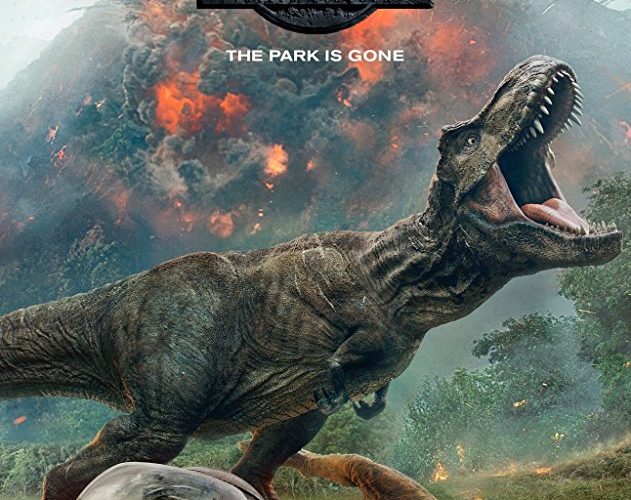 Review: In ‘Jurassic World: Fallen Kingdom,’ J.A. Bayona Milks a Dying Franchise For All It’s Worth

A once-dormant entity is resurrected and vulgarly mutated to fit the irresponsible demands of an entire population in the name of capitalist greed–this is not only the core narrative throughline of the newly-resuscitated Jurassic Park franchise, but also the primary goal of the executives at Universal Pictures. In Fallen Kingdom, we literally see dollar signs light up across the eyes of a megalomaniacal business tycoon (i.e. Universal) as his new technologically advanced breed of dinosaurs (i.e. this new iteration of the franchise) sell for millions to thrill-seeking bidders (i.e. the audience). One would think these parallels are obvious enough to be intentional, yet the new batch of Jurassic films seem to be completely bereft of a much-needed sense of self-awareness.

In the films of Steven Spielberg, the inherently ridiculous and thrilling concept of reviving the Jurassic era in the modern day was executed with a sense of humanity, awe, and a comparatively grounded point-of-view. Decades later, the Jurassic World films are born into a global marketplace with a devolving barometer for what makes a quality blockbuster, and they are keen to adhere to this new low bar. Colin Trevorrow’s 2015 hit was a ghastly creation, a plasticky hodgepodge of contradictory ideas and weightless action, failing to build coherence around pre-visualized money shots. In the improved-yet-still-mindless follow-up Fallen Kingdom, this story has run its course, but with his clear-eyed vision, J.A. Bayona is at least going to milk this milieu for all its worth.

It’s been a few years since what the media bills as the “Isla Nublar Crisis,” which resulted in an $800 million payout for its victims. In one of a handful of attempted cringeworthy parallels to today’s world, an animal rights group has risen up, and the only endangered species they are focused on are the prehistoric creatures. The leader of the Dinosaur Protection Group is Claire Dearing (Bryce Dallas Howard), and when a volcanic eruption threatens the future of the dinos, she heads back to the island, bringing along a reluctant Owen Grady (Chris Pratt) and a few useless supporting characters. This decision is, of course, immediately regrettable and after a climax virtually spoiled beat-by-beat in the marketing, they find themselves in tighter quarters with the dinosaurs. It’s an ideal scenario for Bayona, who made a name for himself with The Orphanage, to return to his horror roots with close quarters action. There’s a few ingenious shots (namely when a girl comes face to face with a – for lack of a better term – ‘roided out, weaponized raptor) and a handful of suspenseful long takes.

Indeed, one might argue they only come to these movies to see dinosaurs pick apart various human limbs and brawl with each other over a bombastic score. Bayona, who brings a contrasting dark sensibility the garish CGI-laden glut of its predecessor certainly delights in these sequences, but in a generous calculation, this dose of darkness occupies about a combined fifth of the film. What’s left is a lifeless script by Trevorrow and Derek Connolly, featuring humor that lands with a thunderous silence and dialogue about the future (and failure) of the human race that is as banal as it is muddled.

Tonally confused as to whether engender sympathy towards dinosaurs (hello, Blue) or humans (especially in a laughable climax), there’s a loss of emotional attachment on both sides. This is a film in which one of the franchise’s most fascinating developments–and a game-changer for the human race–is treated like a throwaway reveal. Even an oh-so-brief appearance from Jeff Goldblum may initially trigger nostalgia for a time when this series had characters worth investing in. Yet, in telling fashion, it’s quickly clear his participation is only for a marketing hook.

A franchise which can only survive thanks to the cyclical reliability of human error, the Jurassic films have not only increased their scope over the years, but also their stupidity. This would be no problem if the tone embraced this self-aware nature, truly buying into the B-movie horror thrills to be had. And still, throughout the film, it’s clear Bayona is just here to visually wring all he can out of a script that foolishly thinks there’s still life left in this story. At one point, in response to the human fallacy of cloning dinosaurs, Pratt’s character says, “You can’t put it back in the box.” Indeed, as long as there is a demand, the Jurassic franchise will trudge on. Yet, like an amusement ride on its last legs, there is no wonder in this world anymore; just the repetition of cheap, worn-out jolts. The park is gone, and with it, so is any semblance of humanity.