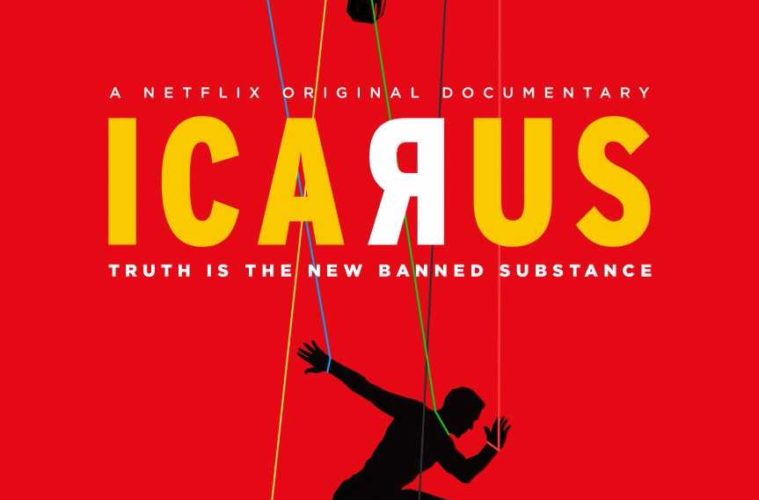 Review: ‘Icarus’ is the Cinematic Equivalent of a Conspiracy Corkboard

If you want two good indicators of how smart the documentary Icarus truly is, look at the poster. First, note the shadow of the hammer and sickle underneath the outline of the athlete. This movie is about Russia, which has not been communist for nearly 30 years. Secondly, there’s the title itself, whose vacuity becomes apparent once you’ve seen the film and realized that there’s no person or institution in it that could credibly be identified as an actual Icarus-like figure. Presumably it’s supposed to be main subject Grigory Rodchenkov, the Russian doping architect turned whistleblower. But he can’t really said to have been brought down by his own hubris or lack of caution so much as the routine shifting of fortunes in Russian politics. Icarus is injected full of portent that it does not do much to earn.

The documentary is aesthetically ambitious, coming in at an unusual two-hour length and packed with “stylistic” flourishes. An interviewee can’t describe something as simple as a building layout without the camera zooming through a CGI recreation. The score surely pauses in places, but I couldn’t tell you where, so relentless is it, draping additional drama over the proceedings. It wants to be a spy thriller, its blockbuster status bolstered by Netflix’s obscene $5 million buy at Sundance. But most of Icarus is needless muddling around in a story that doesn’t really seem that complicated.

Filmmaker Bryan Fogel initially set out to make a Super Size Me-ish documentary about sports doping, seeing how using drugs would change his performance as an amateur cycler. He was put in touch with Rodchenkov, the head of the Moscow Anti-Doping Centre, who would naturally know all about how to evade drug tests and thus became his steroid guru. Then, in the wake of the Sochi Olympics, allegations and investigations began into possible state-sponsored doping in Russian athletes. After the World Anti-Doping Agency suspended Rodchenkov’s lab, he fled for the United States, where he has remained since, fearing for his life because of what he knows. Fogel’s project had unwittingly positioned him perfectly to get at the heart of an international sporting scandal.

This is electric material for a story, but Fogel just gets shocked instead of channeling it into something great. The movie piddles around for a solid hour before it gets to exploring the process of cheating doping tests and how the scandal progresses. The first half is mostly built around Fogel and Rodchenkov’s interactions, mainly over video chat. Fogel tries to make the relationship between them the core of the film instead of realizing when to step back. It bombards the viewer with the cinematic equivalent of a conspiracy corkboard covered in pictures connected by strings, giving a lot of names that no one could hope to keep track of while watching a movie. Rodchenkov’s journey is a secondary concern, and he goes from intriguing enigma to boring martyr as the film approaches its end.

Icarus is the first in what will likely be a wave of documentaries capitalizing on American anxieties over Russia, which have been stoked fiercely by allegations of collusion between Russia and the Trump presidential campaign. Already fodder for deranged Twitter conspiracists, we’ll soon be seeing half-baked scarefests pop up at film festivals and hailed as “chilling” or “incisive” or “revolutionary” for bug-eyed postulating about how Putin is now our puppet master. They’ll all be forgotten in due time, and later looked back on with rueful embarrassment.