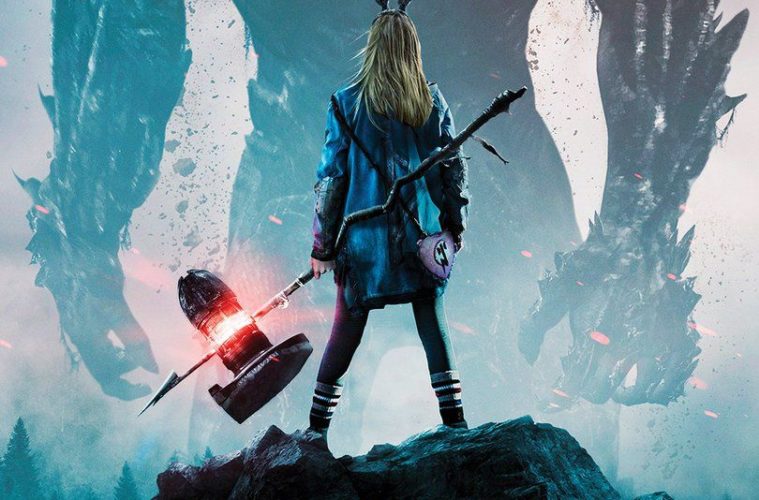 Review: ‘I Kill Giants’ is a Darkly Resonant Fable

While the main creative force behind I Kill Giants is unquestionably screenwriter Joe Kelly, who adapted his own limited comic series of the same name that he co-created with artist J.M. Ken Niimura, director Anders Walter’s past work including his Oscar-winning short, Helium, shows he’s hardly a stranger to the source material’s subject matter. Kelly and Niimura found success creating a work that reflects what happens when a child uses their imagination to confront a still abstract understanding of death.

It’s no surprise then that the two films I thought about while watching this adaptation were A Monster Calls and Where the Wild Things Are. I Kill Giants plays like a hybrid of sorts that’s just as cognizant of keeping things as darkly resonant. It’s okay for a family film targeting an audience that would call its lead (Madison Wolfe’s Barbara Thorson) a peer to toe the line between fantasy and nightmare because children can handle it. And this one does exactly that with a bullying subplot, family squabbles, and an authentic depiction of humans’ knee-jerk rejection of love when they’re conditioned to expect betrayal. But even without the main plot’s metaphorical reveal, young Barbara’s journey in and out of reality hits home because of the strength — both via genuine courage and a manufactured façade of heroics — she possesses in the face of abject despair. We aren’t watching her retreat from the tragedy that’s been laid at her feet as much as masking the whole narrative with a more palatable sheen to challenge that tragedy’s power. And whether or not the giants Barbara lures into her traps with jelly are real, their potential threat is.

So we must invest in her mission. We must accept the lunacy of the premise in order to look beneath the surface at what’s really going on. The story is steeped in the type of mythological lore utilized by the Dungeons and Dragons tabletop game she so desperately wants her brother and his friends to enjoy with her instead of video games. And Barbara isn’t afraid to lay out her fears for the world to scoff at because in her mind she is saving them from the apocalypse, and thus doesn’t have the time to hold their hands. Her town is about to be overrun by giants of wood, ice, and rock.

These impending monsters are why she doesn’t come home right after school, orchestrating her plans in the woods with a secret weapon (inside her self-embroidered and glittered handbag). This pursuit is why she doesn’t have any friends (no time), and why she pushes away anyone who might want to be away with the ramblings of a madwoman. Barbara’s big sister, Karen (Imogen Poots), is meanwhile fraying at the edges playing single mom to her and their brother, but Barbara is also reaching the edge of sanity thanks to the extreme weight of being the only one who knows what’s happening. The kids at school laugh when she explains her “truth.” And her psychologist, Mrs. Mollé (Zoe Saldana), only wants to mine deeper. Soon, newcomer Sophia (Sydney Wade) arrives as a potential ally — someone to confide in without having to worry about saying the wrong thing. Finally, someone will listen to her without a dismissive tone or patronizing smile once “the game” is over.  But rather than provide Barbara an outlet to leave the noise behind, this burgeoning friendship only makes her daily life more difficult. Her human adversaries become bolder until her trademark sardonically biting retorts transform into punches and her previous patience and calm completely disappear.

Kelly deserves credit here as he has written this young girl with a perfect mix of commendable sass and heartbreaking deflection. We laugh when she embarrasses her gym teacher right before growing sad in the knowledge that she’d willingly endure punishment to prove her point. Walter’s direction is up to the task too, upping the suspense whenever Barbara ventures out to set a trap or narrowly escape a giant attack. I Kill Giants is an independent feature, so it keeps the monsters off-screen as much as possible for budgetary constraints. But just as the film’s hero must fight her bully and ultimately, herself, she must also take on a few titans. They’re the world’s evils: hurricanes, tornadoes, earthquakes, and more.

As Barbara, Wolfe delivers a memorable performance, building upon her already sprawling portfolio in cinema and TV. She goes toe-to-toe with two very good actors in Poots and Saldana, holding her own in some instances without even being visible (a moment where she’s speaking to Karen with dolls while below a sheet resonates in its silence). And when the truth can no longer be hidden, she finds that steely position between anger and resignation to cry without crying. It’s her brilliance in these heavy moments of raw emotion that render the final fifteen minutes -an epilogue of sorts- overly saccharine to the point of chore, though. But while the film isn’t as subtle as A Monster Calls or Where the Wild Things Are, it captures the messiness of suffering just as well.