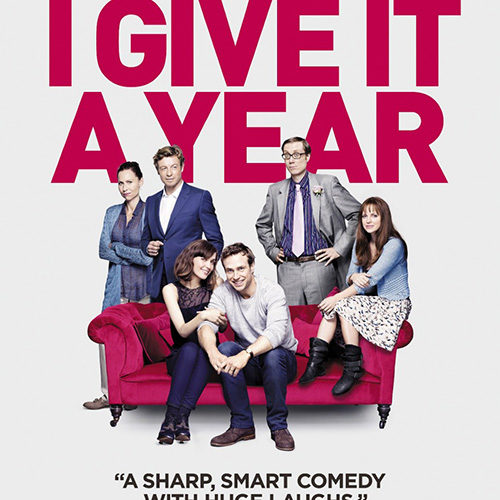 [Review] I Give It a Year

Clumsy and cute — that’s my concise review of regular Sacha Baron Cohen collaborator Dan Mazer’s directorial debut I Give It a Year. It’s actually a perfect embodiment of the central marriage for which the bride’s sister indifferently declares the titular sentiment. They bore each other in equal measure while providing the one thing they each thought they desired. Josh (Rafe Spall) is the type of security Nat (Rose Byrne) covets at this time in her life and she is the perfect woman he’s been bred to want through years of idyllic movie star fantasies. But while both have no qualms with admitting how great the sex is, neither can stand the other for longer than it takes her to sing the wrong words to a song and him to pedantically go on about the most inconsequential nonsense. They know it, their friends and family know it, and it doesn’t take long for us to discover the truth once an opening credits montage shows their whirlwind seven month courtship of stolen glances and eager kisses on the way to the alter. With some help from Nat’s sister Naomi (Minnie Driver) explaining just how wrong they are for one another, we witness the awkward pairing of his warm clan of huggers with her band of frosty, faux aristocracy. He enjoys busting a move with his best man on the dance floor while she embarrassedly pretends to find it endearing. She appears captivated by the allure of his published writer’s intellectual nomad with coworkers at her high-pressured advertising job, while he spends the day on the couch watching crude animal videos on the internet.

The thing about containing so many examples of why they should break up is that the film never really provides any suspense as to whether or not they will. With his ex-girlfriend Chloe (Anna Faris) practically finishing his sentences every chance they’re together and her sensual flirtations with her newest down-to-earth yet cultured client Guy (Simon Baker), this whole escapade is a futile game of guessing how and when the inevitable will occur. Yes, there’s also a chance the two will stick it out because they don’t want to hurt the others’ feelings by being the bad guy—wait, no there isn’t. We simply sit back and hope the awkward hilarity of threesomes, charades, and lewd honeymoon photos will offset the boring slog of watching two completely wrong for each other adults play pretend. Mazer throws in a bunch of American versus British-isms courtesy of the couple’s Englishness and their forbidden loves’ “Yankees abroad” clichés, tries his hardest to add the raunch of his Borat and Brüno, and ultimately finds himself too intent on making a romantic comedy when the more outlandish laughs are what succeed. The tragedy of even those bright spots, however, is that they always crop up in the most obvious ways from Nat and Josh’s unhinged and under-qualified marriage counselor (Olivia Colman) to the groom’s abrasively over-the-top buffoon best friend Danny (Stephen Merchant). The jokes are easy, instill a bit of dry British discomfort, and ultimately prove unable to save the love quadrangle’s attempted drama. The one authentic representation of humanity is another trope too—Driver and Jason Flemyng’s no-holds-barred union of love and hate.

While there are absolutely no surprises under Mazer’s sleeves, however, he does manage to get the finale right. The film’s narrative device of showing Nat and Josh in therapy recounting the nine months of marriage leading to seeking help eventually propels us towards the revelation we’ve waited for and instead of being complete schmaltzy sentimentality, the sheer inarguable fact a year together was too long earns the perfect reaction from not the couple and also their loved ones. I Give It a Year works towards this release of frustration on behalf of the characters and the audience for way too long, but at least Mazer wasn’t oblivious to the situation. He may have let it fester, but he injects a couple good biting oneliners to stem us from a full-on revolt. An interesting mix of British humorist sensibilities and the crass American boorishness that gave his work with Cohen stateside appeal tragically finds its tonal back and forth tedious since whichever version enjoy greater always disappears just when it looked like it may take control. Byrne and Spall are great in the leads at fooling themselves about what they want; Faris is a delight as the sane person (for once) amidst a series of weird encounters; and Baker pretty much lets the charm guide him after being initially introduced with a funny con courtesy of some eavesdropping. They play their parts well enough to make us keep watching, cutely bringing two-dimensional characters to life inside a clumsily transparent setting. I smiled often and even laughed a few times, so kudos for that.

I Give It a Year is currently on VOD and hits limited release Friday, August 9th.