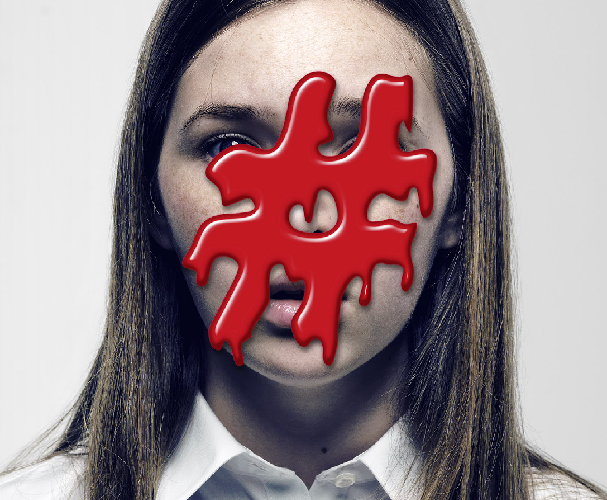 Part Reefer Madness for the plugged-in generation, part Giallo slasher, and part coming-of-age psychodrama, #Horror is filled with the type of craziness that sounds like it would make it a shoe-in for genre festivals across the globe. But alas, it’s incredibly dull, and for every gonzo tangent into an enigmatic snuff film social network, there’s multiple other sequences that are so ineptly directed that a sense of atmosphere or narrative momentum seems purely accidental.

Split inexplicably down the middle of its thin running time between an avant-chic artist named Alex Cox (Chloë Sevigny) on an all-day sojourn away from her crumbling marriage to a famous modern artist (think Jeffrey Koons), and a violently escalating sleepover at their mansion hosted by her daughter, #Horror proves early on that it has no sense of how to bridge these halves.

Her daughter is Sofia, a social media-obsessed, emotionally-neglected 12-year-old who overjoys in the humiliation of her “friends.” This is shown through a psychological “king of the hill” match, as the women take turns trying on Alex’s opulent dresses, only to be mercilessly teased by each other for their respective inadequacies.

There’s new transfer Sam (Sadie Seelert), who moved after a self-harm incident; Cat (Haley Murphy), who lost her mother the previous year; Georgie (Emma Adler), who is fighting an eating disorder, and the aforementioned Sofia (Bridget McGarry), who’s been torn both ways by her warring parents; and two other women who are so poorly sketched out that they’re nearly interchangeable.

Directed by first-timer Tara Subkoff, #Horror uses the pretense of this sleepover for a dive into bullying in the age of the millennial and emotional violence between insecure young women. That’s a powerful – albeit increasingly worn idea – but this story is so painstakingly telegraphed that there’s no room for exploration.

Dialogue entirely consists of characters verbalizing exposition that pushes buttons for later conflicts, or directly spells out the themes of disconnection and the need to share pain online. These conversations have no sense of motion, haphazardly moving from character to character, and only ending when the lecture finds a break.

It’s only in a late scene where the girls can talk unencumbered by their phones that they’re even able to talk like real human beings. That’s certainly the point, and the movie hammers it home repeatedly, but its subsequent narrative concerns are entirely counterintuitive to those themes.

It’s hard not to compare these dynamics with the significantly better (and still strangely underrated) Unfriended from earlier this year, which not only managed a cohesive context for its slasher story, but told a story about internet trauma without sounding alarmist. #Horror’s characters seemingly only exist to be subjugated in the grand tradition of young women in horror.

Subkoff even has a perfect setting for this story of ramping paranoia. Set in a home teeming with unsettling imagery that would make Harmony Korine squeal with excitement, the house is its own expansive performance piece with a pulsing yolk sculpture, contorted statues, and — in the most memorable visual sequence – a collection of masks printed with human faces, but #Horror lets all these elements sit as static set decorations.

Filled with superfluous low angles flirting with the outside architecture and inside corners of the gargantuan mansion, random dutch angles, and slick editing tricks that are meant to be transportive, Subkoff’s directing is flashy, but hardly ever effective.  The choice of spamming imagery of social network feeds directly into the frame is more singular, but too often, this just feels assaultive and disruptive. Even the title sequence, which mashes up Lisa Frank-style lettering with the seizure-inducing light show of Gaspar Noé, prepares the viewer for something far more surreal and campy.

The conversations and compositions only feel all the more drab surrounded by the stunning soundtrack by noise pop auteur EMA. Employing strings like buzzsaws and surging synths that lend a ghostly omniscience, this soundtrack only underscores the missed opportunities of this concept.

A smattering of more experienced players thankfully show up throughout from Natasha Lyonne to Taryn Manning, and standout Timothy Hutton. Lyonne comes the closest to wrangling the awkward dialogue into something approaching affectation. And that’s still after being handed gems like “money can’t buy happiness, usually just more problems.”

Hutton meanwhile rampages through his scenes as psychiatrist who stalks the girls with a butcher knife after he receives a panicked call from his daughter. His delivery of, “You’re fucking useless human beings” to a group of 12 year olds is among the most gleefully demented things I’ve seen all year.

But even with this pile-up of unconnected excess, #Horror fails to even work as an cult oddity. By the end, Subkoff has just replaced the regressive slasher horror victim stereotypes with the internet instead of sex. A grace note after what could have been a impressively pitch-black ending to a misguided first effort veers the entire film into offensively cheap “gotcha” territory.

#Horror is now in limited release and available on VOD.