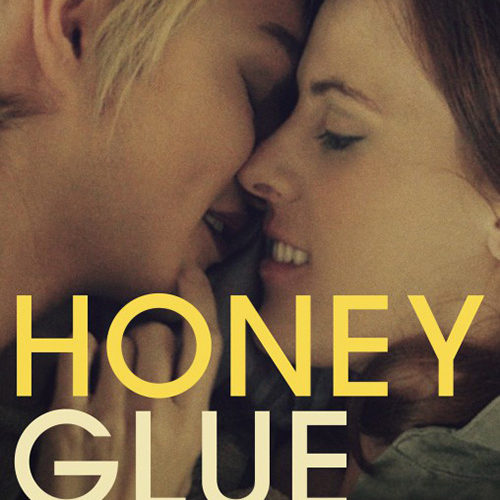 It’s a story about a dragonfly and the princess bee — a girl with terminal cancer and the boy to which she falls love with only three months left to live respectively. Their love exists in a sort of vacuum beyond time, a reality of the now regardless of future or past before them. She (Adriana Mather‘s Morgan) is but a woman unhindered by her middle class upbringing and conservative lifestyle. He (Zach Villa‘s Jordan) a sensitive soul, fluid in gender, appearance, and desires, who just so happened to see the hope and promise of happiness in someone he never would have expected. Everything they do is for each other, for that love. And it is worth preserving even though it will all be over too soon.

The film is Honeyglue, written and directed by James Bird with a hipster quirk able to win as many folks over as it will detract alongside a dark authenticity uninterested in the usual fairy tale ending. This juxtaposition of tones works for the most part when the story he’s created centers on the relationship between Morgan and Jordan. We get a few awkward comic relief reaction shots that feel completely out-of-place, but the hybridization generally allows for enough effective humor to temper the unavoidable death looming above the action. Both characters embrace their sardonic edge with each proving able to laugh at their own lives with enough clarity to offset their inherent depression. They refuse to succumb to the tragedies that have befallen them.

In this respect Bird delivers a worthwhile romance with two eccentrically drawn yet immensely relatable characters seeking to show that love truly is blind. Jordan can wear a dress, Morgan can accept him for who he is, and her parents (Christopher Heyerdahl‘s Dennis and Jessica Tuck‘s Janet) can shake their heads but still smile knowing their daughter is joyous despite the crushing existential blow they share. Couple this with a children’s book Jordan writes that’s based upon their tale together — the aforementioned dragonfly seeking to be with the princess bee in defiance to her queen’s laws — and we receive an empowering message of individuality, tolerance, and humanity. We laugh and cry as the whirlwind romance evolves. We cherish the pain felt because we understand the impossible struggle endured.

Unfortunately, however, this simple story’s built-in complexity apparently wasn’t enough to drive home the fact that Jordan is a gender-defying lost boy unable to comprehend what he wants. Bird decides to double down on his backstory with increasingly dire revelations to turn what should be a sweetly askew, true love conquest destined to simultaneously fail and succeed into a thriller with mob, drug, and torture subplots that ultimately disappear halfway through anyway. I get it, Bird wants to include this chaotic exposition to show how Jordan is troubled enough to be the exact opposite of Morgan — a figure most would dismiss sight unseen, but who’s worthy of redemption. Bird is setting up a cool confidence to tear down into a tearful embrace. But it’s not necessary. There are multiple instances throughout Honeyglue where you believe you’re done with certain subplots before they inexplicably return. Jordan living in an orgy-infested heroin den provides enough of a checkered existence without introducing homicidal maniacs — especially when said maniacs are never seen again. When Jordan and Morgan eventually leave (this isn’t a spoiler since the film is clunkily told as a series of faux flashbacks from a deranged “Romeo and Juliet” position on the road) we find her parents’ contentment as a sweet projection of their love for her. Watching Dennis and Janet explode in a resonant scene of depression is good, but not when they are miles away. This interlude is unnecessary at the time it’s shown. Is the film from Morgan and Jordan’s vantage or not?

We are constantly torn from the main plot like this. But while glimpses into Jordan’s hectic present don’t affect his journey with Morgan (if anything they lessen his love by giving him a reason to leave that isn’t solely based on freeing her from the shackles of Hospice care), experiencing her family’s reactions do. Watching Dennis and Janet breakdown is crucial to explaining their thought processes in letting their daughter live by her own rules. Seeing them and Morgan’s brother Bailey (Booboo Stewart) cope helps make her love for them real. But you can’t just splice it in whenever you want. You can’t leave them behind to focus on Morgan and Jordan’s adventures together and then schizophrenically yo-yo back for what now seems like pandering emotion. The film should be about both star-crossed lovers, but only if the message isn’t derailed. Frankly, watching Jordan get mixed up in really messed up stuff without suffering the consequences (or admitting there are consequences where his final stunt is concerned) does exactly that. Bird wants us to care about Jordan’s sad life, but we’re more interested in his bittersweet present. The past is the past. Why can Morgan be held to this creed but not Jordan? We know his life was hard and we get that he overcame it to be his own person and be with whomever he finds worthy. He’s found his muse now, so let’s focus on their union and the pain of their love. The rest is a distraction and already silently understood.

Chop out twenty minutes of superfluous redundancy and have faith your story is cogent without them. You might excise great scenes like Dennis and Janet’s breakdown, but it’s okay if it serves the whole. There are too many fun sequences (a one-take pizza dinner circling the table as the family takes stock in Jordan, a honeymoon montage made seamless in post, and a Grass Roots sing-a-long) and good performances to waste. Honeyglue has a very good movie inside it, but decisions brought on by inexperience prevent it from sprouting its wings. Rather than let the cancer propel its plot, Bird utilizes it to provide Jordan’s introduction as a unique leading man a venue. Sadly, using him as a means to purposefully subvert stereotypes makes him into one.