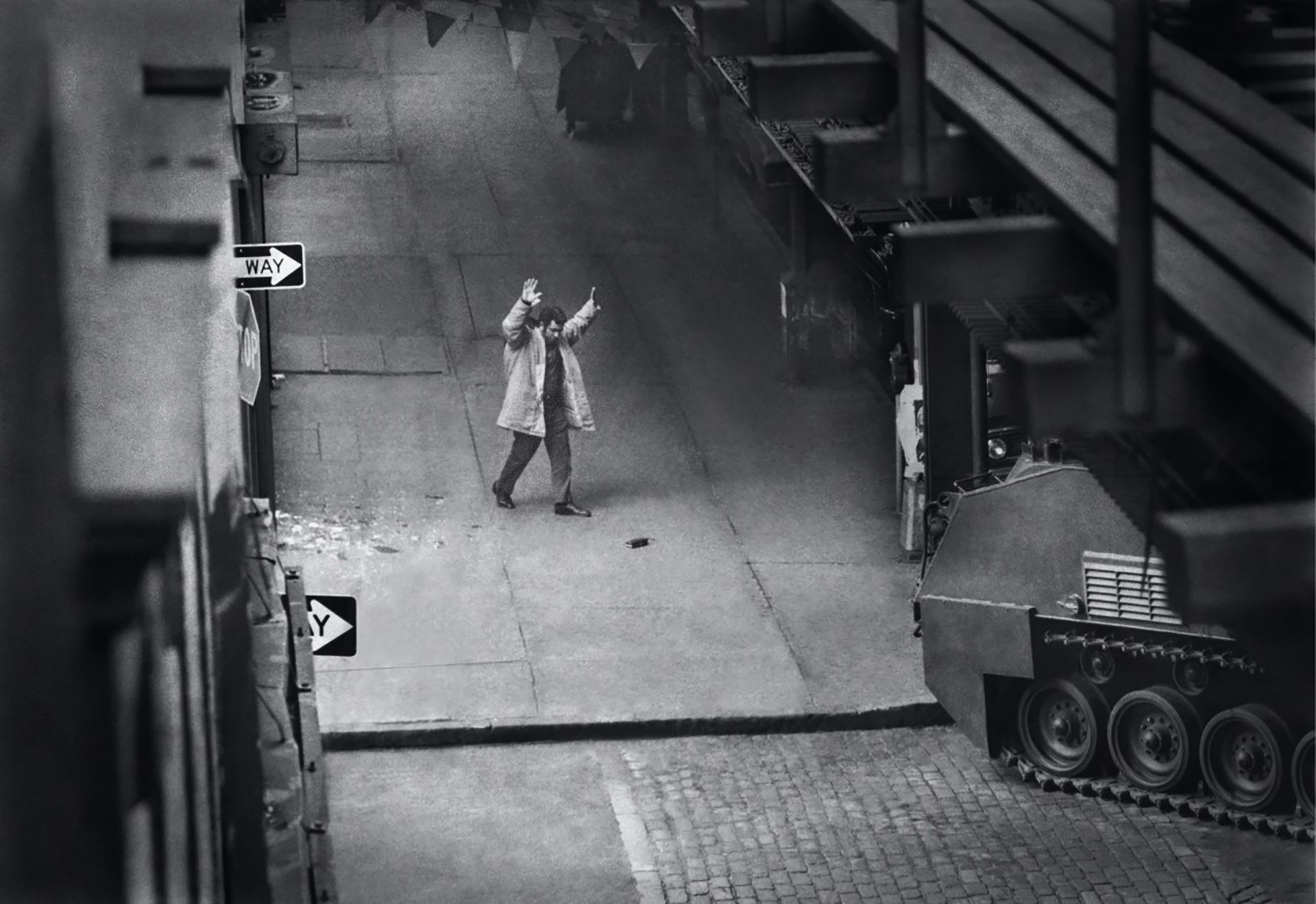 An “us versus them” mentality inherently possesses the drama many documentarians seek to bottle when telling their stories. They mine their topic for the message they aspire to share or take that message and search for a topic which speaks its truth—agenda and content always in concert. Like most issues in this increasingly volatile era of media consumption, however, choosing one or the other tends to alienate the audience that needs to hear what the resulting film is explaining. Stefan Forbes has thus found himself at a Holy Grail nexus point with Hold Your Fire—his subject matter exists at a literal crossroads wherein the “us” and “them” are equally to blame, its complexity demanding the realization that “them” is a construct for violence.

Forbes presents this unique position by using the event in question’s abstract importance (ushering in a new way of police thinking that included negotiation tactics instead of just fighting “fire with fire”) to open viewers up to the event’s nuance itself (the 47-hour 1973 New York City hostage incident at John & Al’s Sporting Goods store). Since no one can deny the impact Harvey Schlossberg, PhD. had, he becomes the perfect in-road: a police officer who was called into the department’s brain-trust to try providing solutions for what was happening via his psychology doctorate (or, as he hypothesizes, to take the blame when his non-lethal approach failed). The defendants agree he saved their lives. The cops agree he revolutionized policing. Everything else is debatable.

And we’re accordingly allowed to debate. Forbes isn’t spoon-feeding us that the NYPD went crazy or that Shu’aib Raheem and his three accomplices were violent revolutionaries. He’s merely presenting the facts that surrounded this landmark crime and interviews with those who were there to try making sense of them. That objectivity helps ensure the dividing lines start to dissolve (at least on one side) from the original idea, presented by a news media informed solely by a police department actively seeking to ensure it was depicted as the “good guys” and the hostage-takers as “aggressors.” Forbes is peeling back the layers of manipulation to ultimately reveal a truth we all know too well: America is a white supremacist nation built upon violence.

It’s easy to reach that conclusion—especially personally when a white supremacist just drove hours across state to my hometown city of Buffalo to intentionally murder Black men and women a couple days ago. It’s also easy to deflect from that conclusion by stating bias. Except it isn’t Shu’aib Raheem or Dawud Rahman—the only other defendant interviewed in the film, due to Yusuf Mussadiq and Salih Abdullah having already passed away—who say those words. It’s Al Sheppard, a white cop who was there on the opposite side. The other things he says hardly make him a liberal or ally to the Black community, but that self-awareness about who the police were (and continue being) is refreshingly honest. Credit Forbes for capturing it.

Sheppard isn’t the only one wielding hindsight to dissect what occurred. So is Shu’aib. Hearing him speak is invaluable, giving voice to the systemic issues that aren’t generally heard when few of the men and women in his position survive, let alone get the platform to speak their truth. He and owner / hostage Jerry Riccio provide the context necessary to counter the record as solidified by an obviously subjective police force represented by hardened yet cognizant men like Sheppard—as well as walking, talking depictions of racism and toxic masculinity, like Captain Al Baker (a man who admits he would have killed them all if given the chance before later patting himself on the back for having the “restraint” to let Schlossberg work).

The radio said police surrounded members of the Black Liberation Army (sentiments Baker vehemently confirms). Shu’aib tells us the exact opposite: they were stealing guns to protect themselves as Sunni Muslims from violent attacks by the Brotherhood of Islam. Rather than lean on that to absolve what happened, however, he merely states it as motive. And where men like Baker wish the four defendants had received the death penalty for killing his fellow officer that first night—refusing to acknowledge the bullet may have been “friendly fire”— Shu’aib holds the guilt for everything that happened in his heart; he knows his presence was the direct catalyst of that death. Whether he pulled the trigger is inconsequential when he’s the reason a trigger was pulled at all.

It’s not the only thing he must answer for: new revelations are presented to him during Forbes’ interviews with family of the surviving hostages. To watch Shu’aib break down in tears about the consequences of his actions while Baker doubles down on his righteous fury is all most of us need to see to know how broken things are. You don’t even have to believe that Shu’aib was trying to surrender when the first gun was fired. I do because it makes sense (stemming from some officers telling him to hand over his weapon while others conversely ordered him to freeze), but the resulting firefight (where Riccio is even quick to refute details supplied by official police documents) was cruelly wrought regardless. Fear breeds disaster.

This is an ordeal that was surely swept under the rug as a heroic police act that’s now exposed as a sprawling convergence of disparate lives forever changed. The number of moving parts is infinite due to the ever-shifting landscape of its central power imbalance. As Riccio (a real hero in his own right whose unique subplot is invigorating) explains, Shu’aib and his friends were held hostage by the police as much he was to them. The moment trust in a solution is broken, peace becomes impossible. And that trust was broken long before that night—e.g. another hostage refusing to be released because she feared the cops more than the men holding her at gunpoint. Until men like Baker accept that, though, the racist culture will remain.

Hold Your Fire hits limited release and VOD on May 20.