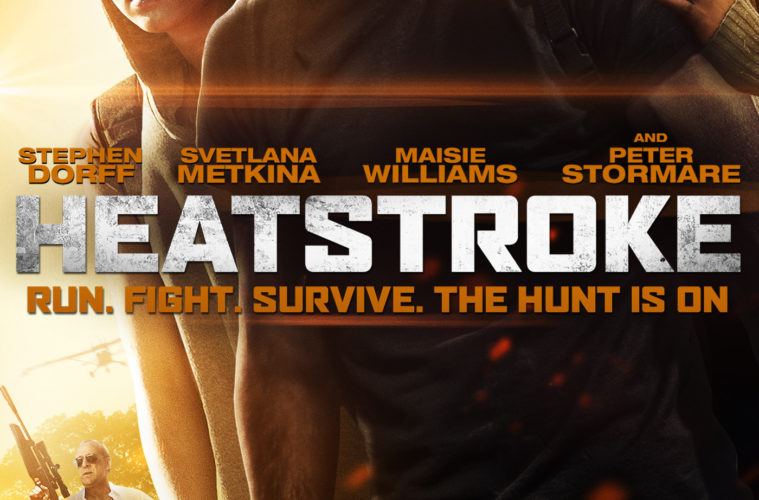 Heatstroke, in large part, feels like a very long chase film during its opening. Set in South Africa, it has several bright spots including a first act that invests more in character development than your run-of-the-mill hide-and-seek thriller in an exotic location. A labored metaphor for motherhood, inspired perhaps by the wild, weighs it down but its not without satisfying moments.

Opening with a juxtaposition previewing the chase to come, it cuts to footage in the wild shot by Paul O’Malley (Stephen Dorff), a scientist studying hyenas. He lives with sexy girlfriend Tally (Svetlana Metkina) who has zero interest in settling down and having a suburban life. A fellow researcher, she finds fieldwork thrilling even if most of the time it is not. Paul’s daughter Jo (Maisie Williams) copes like any teen, retreating to her iOS devices, even in the most exotic of locations. After she’s busted for pot, Jo’s mom sends her on the road with Paul.

The first act, a family drama in an exotic locale, reminded me of Caroline Link’s far superior German family drama Exit Marrakech from last year’s Toronto International Film Festival, which has a US distributor but no release date as of yet. Heatstroke, opening in limited release and VOD, should be experienced on a large screen as its beautifully lensed by Ben Nott. Investing in the family drama ratchets up the tension a bit, but unfortunately as a device, we see this coming from a mile away. After a traumatic event, Tally is reluctantly launched into the caretaker role as they face the elements: little food, very few reliable sources of water, and poachers tracking their every move. Some elements work, others we have seen a thousand times before.

Written and directed by Evelyn Purcell and based upon the novel Leave No Trace, I fear its source material may be the problem. A straight-forward genre picture that’s well-acted and beautiful to look at, it promises a little more under the surface in its first act than its third delivers. Everyone, right down to the villains here (led by Peter Stormare by a man with apparently no conscious), plays their part as required.

What would have made for a more interesting analysis is, despite the Africa setting, why characters of color are distinctively missing (yes, it’s set in South Africa, but…). Yet, instead of exploring metaphors for colonialism it lays the motherhood on thick. Heatstroke disappoints once it moves beyond its set-up and into predictable territory.

Heatstroke is in limited release and on VOD.