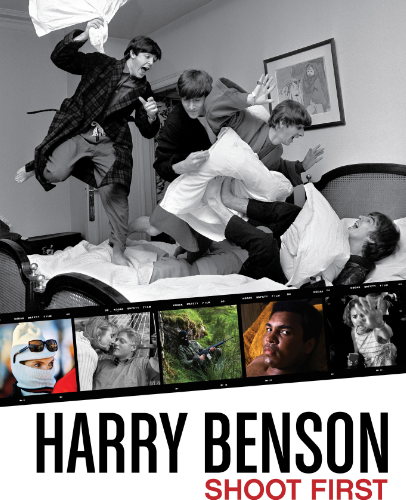 Review: ‘Harry Benson: Shoot First’ Goes Behind the Camera of an Iconic Photographer

In an age where we have gone so far as to add the word “selfies” to the Oxford Dictionary, Harry Benson: Shoot First is a vital reminder of what it’s really like to take a picture. Yes, it’s time to get on that soapbox. Put down your iPhone for a second, because directors Justin Bare and Matthew Miele have crafted a film that explores photography at its pinnacle of creativity — all via the life and work of a quirky Scottish man named Harry Benson.

Most of the world knows him for his iconic images of The Beatles (you know, those black and white shots of John, Paul, George, and Ringo going at it with pillows in the George V Hotel, seen below), but Benson’s career spans much further and wider than that. Harry Benson: Shoot First takes you through it all. From the cocaine left behind in Jack Nicholson’s nose hairs to the freshly stitched head of Elizabeth Taylor post-brain surgery, this film makes evident that Benson has a way of capturing Hollywood icons that is authentic, vulnerable, and utterly refreshing in a world where Beyoncé’s publicist tries to control every unflattering image that came out of the Super Bowl. Here we see Deborah Norville breastfeeding her baby during what was supposed to be “between takes.” Here we see Ethel Kennedy holding up an arresting hand at the camera moments after her husband has been assassinated. Here we see the just spilled blood of Martin Luther King Jr. in a glass jar being held by Hosea Williams. In a world where media legitimacy is fading fast, this is a haunting document.

And just when you thought it was all about the iconic faces of Hollywood and Capitol Hill, Harry Benson: Shoot First details the photographer’s early career working in the realm of British journalism. His dedication to the unheard stories of this century is apparent and unwavering in his extensive portfolio. Heartbreakingly poignant images of starving children in a Mogadishu refugee camp are highlighted and their composition and quality speak volumes. Arguably, they are the one set of photographs that will endure in your memory long after you’ve finished watching Harry Benson: Shoot First.

As for how Benson manages to capture such striking images? He perhaps gives away his secrets all too easily, stating that he always tries to be the first person to arrive on the scene and the last person to leave it. His family confirms this throughout the film, weaving in a piece of this prodigious photographer’s personal life to the narrative to produce a well-rounded documentary that not only leaves one feeling informed and inspired, but also anxious to carry a camera at your side no matter the occasion.

Impressively, the directors’ approach manages to steer clear from the Ken Burns style, keeping Benson’s photography in its original ratios sans any jaded zooms. Instead, it’s a mix of back and forth between talking heads, handheld footage of Benson examining his own work, and still photographs being flashed on the screen to the rhythm of soundtrack that accompanies them.

A plethora of famous faces make cameo appearances throughout, including Alec Baldwin, Ralph Lauren, Sharon Stone, and even president-elect Donald Trump (though we can assume this film was completed long before the 2016 election). While each cameo appearance presents its own sweetened and syrupy anecdote of the beloved photographer, there is one common thread that can be seen running through them all: Harry Benson can charm. By the film’s conclusion, you can’t not be in love with this man, and, of course, his pictures.