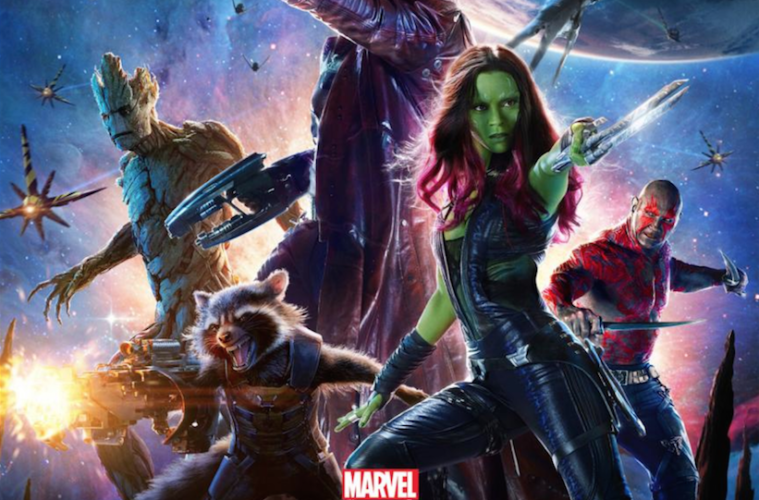 [Review] Guardians of the Galaxy

The opening scene of Marvel’s Guardians of the Galaxy is decidedly Earth-bound; a young boy sits in the waiting room of a late 90’s hospital, listening to 10cc’s “I’m Not In Love.” A few emotional moments later—after the whole world has changed for the lad—he runs outside and is caught in the blinding spotlight of a gargantuan spacecraft that hovers above him, breaking the calm of an otherwise silent summer night. It’s an image more fitting of an old pulp magazine or Golden Age sci-fi novel than a modern comic book, and it’s an inviting peek into the headspace of James Gunn’s take on the wilder side of the Marvel Universe.

Once the prologue is over, we are shot all the way across time and space to catch back up with Peter Quill (Chris Pratt), now an adult slumming it as would-be intergalactic pirate Star-Lord. This is where Gunn’s light yet eccentric touch with the material starts paying off; 70’s tunes keep blasting off Star-Lord’s Walkman as he saunters across alien landscapes that seem both bizarre and matter-of-factly real at the same time. There’s a hint of Indiana Jones in the opening, as Star-Lord finds himself face to face with a powerful new relic—the latest Marvel MacGuffin—and Korath (Djimonn Honsou), the henchman of Kree warlord Ronan (Lee Pace), who wants to take the artifact to his boss for world-conquering purposes. Look, there’s an excessive amount of banter in Guardians of the Galaxy related to clandestine revenge plotting, cosmic gems of great power, and about the grand battle between ultimate good and evil. The plot, as much as one cares to process and understand it, follows the usual guidelines of the Marvel superhero adventures; somebody wants something powerful to do something bad, and someone good, who’s also powerful, needs to stop them. The basic dynamics are more or less the same here, although Ronan and his villainous femme-fatale Nebula (Karen Gillian) are decidedly less interesting and cheeky than Tom Hiddleston’s Loki. Of course, Marvel doesn’t sell their films on plot, and this one in particular stands so far outside the concerns of the story that it’s easy to appreciate Guardians for everything not related to the narrative.

In fact, Galaxy particularly excels because of the way in which Marvel loosens up the reigns so this B-team can rise to the forefront of audience awareness. Through a series of events that pile up coincidence upon coincidence, Peter Quill finds himself landed in the space slammer with four other unlikely no-accounts. These characters, not Marvel’s greatest line-up before this, do not bear the exceptional pedigree or distinction of Thor, Iron Man or Captain America. They are, essentially, a rogue’s gallery of heroes, including an feisty anthropomorphic raccoon named Rocket (Bradley Cooper), his giant walking tree of a bodyguard, Groot (Vin Diesel), lithe and deadly assassin and turn-coat Gamora (Zoe Saldana) and burly, literal-minded Drax (Dave Bautista). These four and Quill are joined by a fifth misfit Guardian who never actually appears on screen. His name, of course, is James Gunn. Taking a big chance on the idea that Marvel’s more other-worldly titles could work on screen, the studio plucked Gunn from the world of indie schlock, where he had first worked for Troma, and then made two offbeat feature films; one a slimy alien monster comedy called Slither, the other the unhinged vigilante ditty Super. Nothing on his resume necessarily pointed that he could helm a film with the scope and density of Guardians, but the gamble has paid off. Instead of agonizing over this would-be franchise’s individual artistic identity, Gunn demonstrates a heedless energy and zeal that’s reminiscent of Peter Jackson and Sam Raimi when they made the jump from bargain basement to blockbuster. In essence, Gunn enters the frame as a gob-smacked fan and extraterrestrial tourist, exhibiting kid-in-a-candy store levels of excitement aimed at his characters and the world they inhabit.

What works best in Guardians is, in fact, the camaraderie of the team itself and the heart applied to their slowly gelling sense of family. Pratt leaves many of his more irritating comedy mannerisms at the door, dialing down the smarm while gently elevating the charm. Saldana is smoldering and sarcastic, tapping into the campiness while still letting the character be deadly serious. Bautista does what he can with the stoic sobriety of Drax; he’s great at the physicality of the performance, but not the necessary subtlety that would transform the berserker from amusing to genuinely, tragically hilarious. Groot and Rocket are the best characters the film has to offer. Original, distinctly alien and yet intrinsically more human than their counterparts, Groot and Rocket share the fact they are both a melding of animation and voice-acting. They are also both so ludicrous in concept—an angry, fur-bearing mutant with a Napoleon complex and a walking oak who only utters three words over and over—that the entire production works extra hard to accommodate them. As a result, they arrive as fully fleshed-out and fascinating creations. My favorite aspect of Guardians is the visually zany world that surrounds the characters. As one who’s grown tired of the repetitive and imaginatively dull escapades of the other Marvel heroes, I felt refreshed by the fantastic and imaginatively rich vistas that Gunn and his production team have created here. Going back to the inspiration of older science fiction, Galaxy generates imagery that is both wondrous and occasionally beautiful. The mining colony situated inside the head of a titanic dead alien stirs the imagination, as does a massive squadron of thousands of ships forming a shimmering, protective quilt that blankets an intruding destroyer. The space vistas themselves form a quiet and provocative back-drop for the derring-do, and the special effects have been so carefully conceived that we start to regard the objects and creatures in the frame as defiantly realistic.

It also helps that the movie, at a very intrinsic level, is just good fun. Gunn handles the action and the quipping with a sure hand, and he keeps the pace moving so that we never lose sight of our characters and their desires, which is important because the plot itself is uniformly bland. Eventually, the film devolves back into a standard special effects climax when it could have really pressed on for something more interesting. As previously mentioned, the villains are a wet blanket—mostly a placeholder used to introduce a character who will find his way into other projects down the line. It’s always seemed odd to me that these films hire actors like Gillian, Pace—and Christopher Eccleston in Thor: The Dark World—and then hide them under make-up with a few dour, terse lines to their name. Much anticipation has been placed on Benicio Del Toro’s Collector, but his one scene here is scarcely longer than the credits teaser that announced his involvement. This element isn’t crucial in Guardians, but it does create an imbalance in the picture that can’t be overlooked.

Despite some of its flaws, I actually enjoyed Guardians of the Galaxy more than many of the other Marvel pictures, mostly because it captures the breathless thrill and adolescent bemusement that comes with reading a rip-snorting and beautifully drawn 30 page comic issue. Space opera with a heaping dose of good-natured humor, this Galaxy makes the prospect of Marvel’s weirder wonders not just likely, but welcome and exciting.

Guardians of the Galaxy opens in wide release on Friday, August 1st.