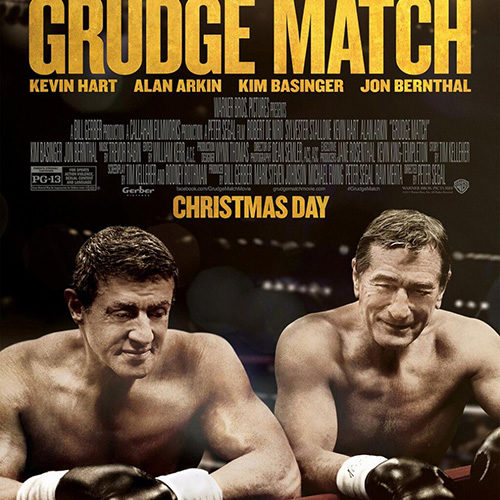 Someone had the brilliant idea of putting Rocky Balboa and Jake LaMotta in the ring together at the ripe old comedic age of seventy and their Hollywood surrogates agreed, to no one’s surprise.

Not only that, but the actors also find added pleasure in playing these latest roles as somewhat of a parody on themselves with Robert De Niro‘s Billy “The Kid” McDonnen being all about the easy financial score (see the two-time Oscar-winner’s trajectory the past two decades) and Sylvester Stallone‘s Henry “Razor” Sharp having a mountain-sized chip on his shoulder due to an overblown sense of integrity (see the Oscar-nominee’s recent screenwriting renaissance known for his taking himself way too seriously). It’s two legends having nostalgic fun with their celebrity personas onscreen while revisiting the sport that helped make them so—what more do you want? Well, for starters, something more than a story that wasn’t so on-the-nose that it appeared to be following some predetermined rubric of what constitutes success for a sports comeback flick. Maybe a twist or turn we didn’t meet with a roll of the eyes in its obvious play for sympathy?

Screenwriters Tim Kelleher and Rodney Rothman do at one point take what had been a by-the-numbers, slight, and mildly humorous comedy into potentially dark territory with tragic ramifications, but such ideas don’t last long when the goal of saccharine closure starts jumping up and down for attention again. It’s called Grudge Match and that’s all these boys need to work out their differences. Actual emotional turmoil with consequences for their selfish actions would only get in the way.

Here’s the rundown: Kid and Razor were the best of the best light heavyweights, vying against each other for the belt twice with one victory apiece. As their stars rose and money flowed, however, Razor abruptly retired to Pittsburgh to reclaim his job at the old plant he worked before the fame. Kid did some endorsements, opened a car dealership and a bar, and like his counterpart eventually threw in the towel with just that one loss on his record. A videogame designer’s request to use their likenesses in a new boxing game puts them in the same room for the first time in thirty years, a brawl breaks out after heated verbal sparring, and the Internet goes ablaze with mocking humor and mass clamoring for the train wreck a present-day rubber match would bring. Characters from their past arrive. There’s trusted advisor Razor’s adult home-ridden trainer Lighting (Alan Arkin); advantageous moneymakers like his ex-promoter’s son Dante Slate, Jr. (Kevin Hart); curious outsiders like Kid’s biological son B.J. (Jon Bernthal); and emotional baggage in the form of the boy’s mother Sally (Kim Basinger), a woman forever bonded to both fighters. Viral marketing and happy accidents of aggression on film begin to sell seats, the two former champions struggle to get in good enough shape to not die in the ring, and their potent rivalry is rekindled as mean as ever. The desire to right past wrongs on a personal level inevitably rears its head too once emotions find these old guys dropping their guard to risk losing everything again, ultimately finding themselves toe-to-toe for guts and glory, better or worse.

It does its PG-13 rating proud with a couple flippant rape jokes, a lesbian joke and a stab at MMA fighters’ kicking ability meaning they’re “girls”—there’s little bite to the humor as a result so these cheap laughs must suffice. Anthony Anderson and LL Cool J turn up for thankless punching bag roles, guys like Jim Lampley, Steve Levy, and John Buccigross try to give things an authentic sheen, and somehow our two septuagenarians pack enough heat behind their fists to make everyone threatening look as though they have a glass jaw besides themselves. In other words, it’s exactly what you’d expect from director Peter Segal and the trailers: a bland two-hours meant as a callback to our leads’ past successes with its fare share of chuckles, an over-abundance of overwrought heart, and bad CGI face swapping. De Niro does well as the immature, womanizing, provoker, while Hart once again excels in the sassy, loud, little man role he seems to have embraced. Arkin plays unfiltered crotchety like only he can, despite having to deal with lame jokes set up by buckets of horse urine. The acting doesn’t really start to make you feel anything until Bernthal arrives to give his abandoned son more emotion and respect than the part deserves. He’s way too quick to forgive transgressions even when those he gives second chances to monumentally squander them, but that’s a fault of the paint-by-numbers script and not his performance. His B.J. possesses one of the few genuine glimpses at the type of heart the filmmakers hoped to have but failed to instill.

The true success rising out of the heap, however, ends up Sly himself. He finds a way to truly humanize this stubborn brute that knows he had talent but let it all slip away once Kid destroyed his pride. His reasons for retiring are honest and admirable when revealed, his bullheaded stupidity getting back in the ring now a character flaw to set things straight. There’s also a nice spark when he smiles alongside Basinger to contrast the growl masked by years of forgiving and forgetting a temper built with the tools to back it up. It’s just a shame his realistically drawn creature was packaged alongside such colorful characters more intent on flash and dazzle because I could see a bit of Mickey Rourke’s The Wrestler trying to break loose. Maybe that’s for another day.