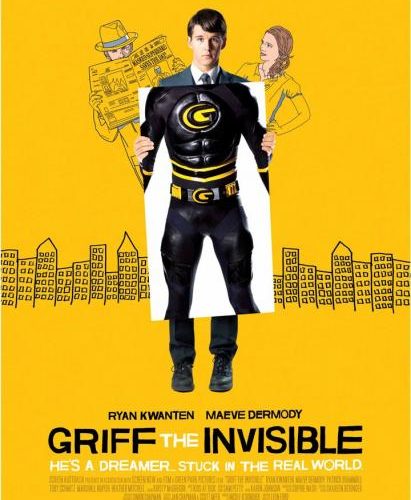 This summer the larger-than-life superheroes from the pages of DC and Marvel comics have bounded into theaters with movies that brandish complicated plot lines, A-list stars and big budget effects. And yet it’s this odd, low-budget superhero offering out of Oz that has most impressed me. The feature film debut of writer/director Leon Ford, Griff the Invisible centers on an average man who dreams of being a superhero with the power of invisibility. Ryan Kwanten, best-known Stateside as the tan and blonde Southern dynamo Jason Stackhouse on the sex and blood-soaked vampire soap opera True Blood, stars as Griff, a pasty and bumbling young Aussie with no social skills and a truly dorky haircut. But there is more to Griff than his placid appearance lets on. Sure, by day he is a mild-mannered office drone, but by night he is a masked and muscled vigilante, who prowls the streets of Sydney to protect the innocent from the shadow of evil! The adventure begins with a kinetic action sequence where Griff’s slick alter-ego mercilessly snaps necks and cracks spines with an effortless bravado before growling, “Get out of my neighborhood!” The action is campy and cool, introducing a visual flare that is sure to earn Ford fans. But as Griff proceeds to his day job, it quickly becomes clear that he is an odd duck, unrelentingly mocked by the office bully and sneered at by his female coworkers. But that’s fine by Griff, who dutifully lives in solitude to protect his loved ones from his dangerous double life…except for his intrusive brother Tim (Patrick Brammall), who often interrupts his private hero banter practice. But Griff’s self-imposed loneliness comes to an abrupt end when Tim’s girlfriend Melody (Maeve Dermody), a thoroughly eccentric yet curiously charming ingénue, begins showing up on his doorstep. Suspecting Griff is the masked man who patrols the city, Melody pursues him, desperately wanting to get in on the adventure. Griff is initially reluctant, but the more Melody rants about her disbelief in ghosts and conviction in the existence of parallel universes, their coming together becomes inevitable. Both are dreamers and self-proclaimed “experimentalists” who refuse to be confined to the rules of maturity or reality. This makes their blossoming romance unapologetically strange yet unfailingly sweet. Yet, as Griff continues to craft his homemade mechanisms (listening devices, secret passages and an invisibility suits made from fresh-squeezed orange juice and baking powder), the film begins to reveal cracks in the façade of this fantasy world. It seems Griff is a reinvention of the romance of Peter Pan and Wendy, where the real threat is not nefarious villains but growing up and leaving Never Never Land behind. While its aesthetic frequently veers into camp territory, Griff the Invisible maintains an earnest and sweet tone that sets it apart from the similar-in-concept but sardonic Super, which opened earlier this year. Utterly rejecting cynicism, Griff and Melody construct a fantasy world alive with childlike wonder, ingenuity and curiosity. Their enthusiasm is infectious, and their love story is equally weird and wondrous, providing something reminiscent of Michel Gondry’s surreal and sentimental sensibilities. Ford couples his quirky and colorful visual style with an engaging emotional journey that is complimented by a charismatic cast and a kooky yet catchy soundtrack. It’s all stitched together with a tender touch that makes it the cinematic embodiment of one of Griff’s suits. Essentially, Griff the Invisible is a delightfully eye-catching and curious creation, as filled with heart as it is imagination.