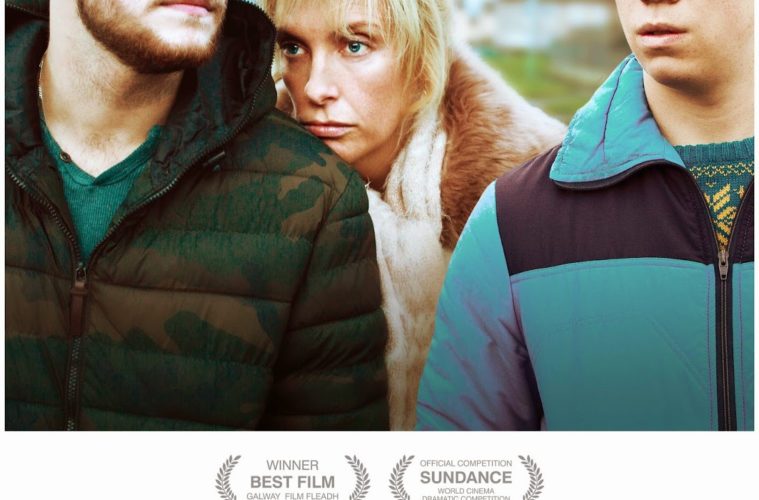 There’s no doubt that Irish actor Jack Reynor deserves recognition for his role in Glassland, a modern-day kitchen sink drama set in a south Dublin social housing suburb. He won the World Cinema Dramatic Special Jury Award at the Sundance Film Festival for his portrayal of John, a poor Irish lad trapped by the demands of caring for his severely alcoholic mother. To that end, the latest from filmmaker Gerard Barrett functions better as a career stepping stone for the 23-year-old up-and-comer rather than as a worthwhile examination of addiction and poverty.

A long opening sequence shows John living what deceptively looks like an average early 20-something male existence, working a low-wage job as a cabbie and slumming it in a dreary flat with a sink perpetually full of dirty dishes. The image shatters, however, when he returns home to find his mother, Jean (Toni Collette), passed out in a pool of her own vomit, and, with the efficiency of someone who’s made this discovery before, rushes her to the hospital.

From there, his strained attempts to retain some semblance of normalcy are revealed – scenes of him nursing Jean back to health are immediately followed by his appearance at an 18th birthday party for his kid brother, Kit (Harry Nagle), the son Jean disowned because he has Down syndrome. As he’s confronted with the possibility of his mother’s impending liver failure and her inability to stop drinking, John begins to crack under the pressure, leading him to take drastic measures in order to obtain the help she needs.

What’s most impressive is Reynor’s ability to bring nuance to an oppressively bleak story about a toxic parent-child relationship, where roles are reversed and John is left to pick up the pieces of his broken family. Writer-director Barrett – who explored this kind of domestic desperation before in his breakout film Pilgrim Hill – gives his lead actor license to dictate the tone, allowing him to supply emotional resonance to scenes constructed with minimal composition and editing. Reynor doesn’t disappoint, as he showcases his ability to shield his character with a resilient facade, only to then betray that exterior by exuding pure anguish with little more than a facial expression.

He’s equally matched by Collette, whose sensitive and thoughtful performance manages to imbue a downright heartless-seeming woman with complexity. As Jean’s condition takes its toll on her ever-loyal son, John’s only escape lies in Shane (Will Poulter of The Revenant), a cocky mama’s boy who’s introduced trying to drop off a support check for an illegitimate child he’s not allowed to see. Though John’s relationship with him is questionable, it’s clear that, through Shane, John is able to vicariously enjoy all that’s he’s been deprived of – a doting mother, carefree youth, and a stable home life. While the cast masterfully shoulders the sad affair, their efforts are undermined by Barrett’s unfortunate tendency to tell when showing has already done the job. When Jean sours a rare moment of peace to explain in painstaking detail why she drinks, even Collette’s excellent delivery can’t hide the fact that the frightfully honest monologue only serves to provide unnecessary back story. Such moments of self-awareness threaten to topple a film already top-heavy with tragedy, as other characters – including go – nowhere John, who, during one scene, tells a counselor he feels like he’s “spinning his wheels” – express despair that’s already quite evident.

The lack of subtlety is disheartening, but it’s nothing compared to how I felt when the somber drama took a sudden, unexpected detour into thriller territory and abruptly ended there. How the film arrives at its confounding final act is only hinted at in scant scenes where John drops a prostitute off at a truck stop, or engages in clandestine phone conversations with a mysterious, cartoonishly villainous-sounding client. The sorely neglected plot point, which, apparently, is supposed to build toward what the press notes describe as “a life-changing task that may alter [John] and his family’s lives forever,” reaches for moral ambiguity, but instead tumbles into off-putting vagueness, leaving little to appreciate beyond the fine performances.

Glassland is now in limited release and on VOD.