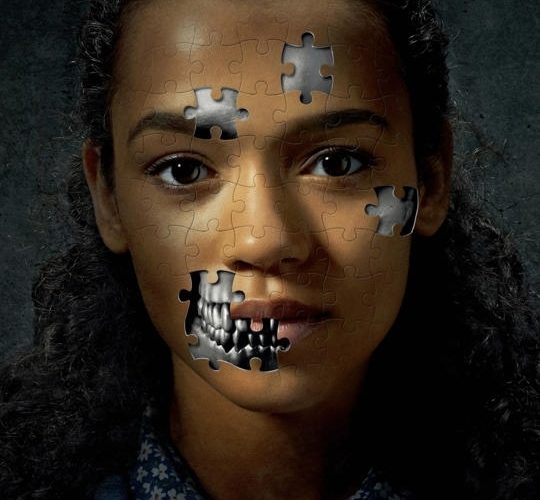 As far as PG-13 horror films released in January go, Escape Room exceeds expectations despite a fairly sloppy (yet efficient) set-up which traces three of the six players that make their way to an anonymous Chicago dockside warehouse ready to play an immersive game for $10,000 in prizes.

While character development comes in the form of flashbacks that do find a link between the characters (I will not spoil it, but occasionally the audience finds itself ahead of the players), the real star of the film is the elaborate set pieces, which push the psychological intensity right up to the PG-13 limit. Directed by Adam Robitel (Insidious: The Last Key) from a script by Bragi F. Schut and Maria Melnik, Escape Room delivers a few genuine white-knuckle moments. In the film’s best-directed sequence we find an inverted bar where the floor–or ceiling–literally falls out beneath the players; another highlight places our leads in a small room influenced by 1980s video art that inspired my local AMC to post the kind of warning Tony Conrad’s landmark film The Flicker includes.

A cross between Cube and Saw with less blood and gore, Escape Room follows a traditional format with stock characters. They include an aspiring quantum physicist Zoey (Taylor Russell), combat vet Amanda (Deborah Ann Woll), a trucker Mike (Tyler Labine), an alcoholic burnout working in a supermarket Ben (Logan Miller), puzzle geek Danny (Nik Dodani), and financial prodigy Jason (Jay Ellis). Meeting in a mysterious and creepy waiting room that soon becomes an oven, they find their way out together through carefully observing all of the clues, as one does.

Except for a few genuinely effective moments, the rest of the story is what it is, taking things in expected directions on occasion, predictably killing off its characters. Still, Escape Room is perhaps one of the better results that could come with certain constraints on content and audience expectations. Playing to a crowd of teens, it seemed to work; old students of horror, on the other hand, might only enjoy the set pieces and games. Escape Room isn’t exactly original but it is entertaining, even as it grows predictable as it refuses to take certain characters all that seriously in the name of narrative efficiency. After all, they are pawns in a grand scheme, chosen for a reason that becomes pretty clear when the film offers up a second flashback, triggered by an article of clothing provided in the maze. In other words, the game master has studied the Saw films, and even though there is a “Doctor” omnipresent, he’s not interested in the kind of extreme therapy offered by Jigsaw.

Ending on a note that spells out the first act for an inevitable sequel that will either grow trite or self-referential to hopefully a point of brilliance, Escape Room occasionally satisfies, operating within its own twisted logic with a few interesting–if not original–set pieces from ovens to Narnia. Students of the genre will know what’s coming and if you’re craving a few thrills, you can do far worse.